I thought we had had a poll on BZP to decide Podu's mask. Or was it just for intrest's sake and not for canon?Takhamavahu 13:29, 30 August 2012 (PDT) Here it is: http://www.bzpower.com/board/index.php?showtopic=1471 I thought it had been before BZPower's hiatus, but it has actually been since it was back. Huna was winning by a huge majority. It looks like it was just for intrest's sake and not for canon, though. Too bad. Takhamavahu 21:43, 31 August 2012 (PDT)

I've made a comparison between Maku (I think, because Maku is never clearly labeled as such in-game) and Podu. 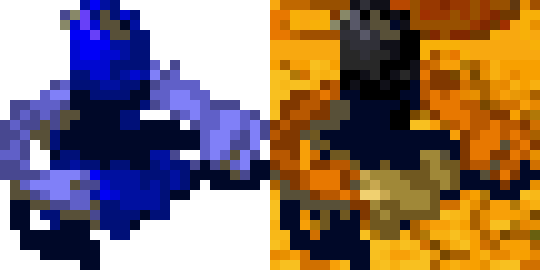 If I remember correctly, one of the big contention points with using this sprite as the basis for Podu's mask (along with the masks of other NPC Matoran) is that the sprite is randomized with each playthrough, with the black Huna being only one of the possible masks he could be wearing. I don't own the game so I can't confirm it for myself, but if you look at this video, Podu is wearing a tan Kakama, and in this video, Podu is wearing a tan Miru. --PeabodySam (talk) 16:20, 18 July 2015 (CEST)

@PeabodySam, Podu is the matoran, who was under the boulders, not who had his bird under the rocks. In the first video you posted, Podu doesn't appear, he was featured in this video and yes, he does have a black Huna, he's the matoran who was under the rocks. In the second video, you posted as evidence, he remained stuck under the boulders, for the player didn't even rescued him. -- Surel-Nuva (Talk) 21:45, 4 September 2016 (CET)

Right, thanks for catching that big error of mine, Surel-nuva! For some reason, I thought that Podu was the Matoran with the trapped Moa.

But, the question still stands if Podu's sprite is hard-coded to always wear a black Huna, or if it is randomized like other Matoran in the game (such as our Moa-owning Po-Matoran friend). Multiple playthroughs would be recommended, making sure to stop and check on Podu every time. If we can confirm that he always has the same mask, great! If not... well, that's what I'm concerned about. --PeabodySam (talk) 04:53, 28 January 2018 (UTC)

A little while ago I specifically tested Podu for mask variation. He always has a Huna, even when the other two villagers in the same room as him change masks. Seems he is indeed one of the few that has his mask specifically defined. Peri (talk) 04:00, 12 December 2018 (UTC)

Just wondering wear Podu's name came from because i'd like to find out the name of the Onu-Matoran with the green arms and Miru who you talk to once you have the needed Vuata Maca Crystals, if they even have one. Unless i'm just being dumb and it's in plain sight because it's not mentioned anywhere in the game to my knowledge. DooM (talk) 04:44, 2 December 2019 (UTC)