Autobots, Roll Out! Two companies unite to create a LEGO set of one of the most iconic toy characters from the 80s. Will this set be the one to stand, or the one to fall?

The Optimus Prime toy we know nowadays originally was called "Battle Convoy" from the Diaclone toy line owned by the Takara Tomy company in Japan. Said company would then become business partners with Hasbro in the west to give us the Transformers franchise.

Fast forward to more recent times, we have the fortune of Joe Kyde, former Product Designer for Hasbro and current Senior Designer for LEGO, bridging two toy companies to create a transforming LEGO set, adapting designs and engineering from both. It's pretty phenomenal to see such a crossover among what Hasbro has already done with Transformers (Ghostbusters, Back to the Future, Jurassic Park, etc.)

And now here we have the official LEGO Optimus Prime set in its glory. It took me a considerable amount of time organizing and building it, but it was very enjoyable to figure out mechanisms and see the entire completed model.

Quick Notes: I only took a picture of the front of the box, not the back, please excuse my negligence and search online to find pictures of the back. 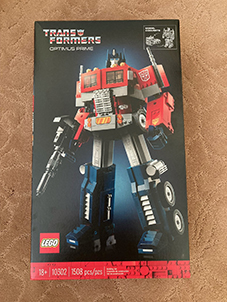 The front of the box showcases Optimus Prime in his robot mode holding his signature Ion Blaster. The Transformers title on the top left is the same style as was used for G1 with the Autobot logo. On the other end, a black and white picture indicates that Optimus Prime can transform into his vehicle mode, as noted with the phrase "Model Converts".

The back of the box shows more details about the set. The top half shows three images demonstrating how Optimus Prime transforms between modes. The actual transformation has more steps, but image itself does a good enough job to give viewers an idea what needs to be done. Underneath that image is most the accessories that come with the set; a display plaque that shows Optimus Prime's bio and tech specs, the Autobot Matrix of Leadership, an Energon Cube, an alternative waist plate to match the cartoon appearance, an Energon Axe, and the Ion Blaster. On the bottom, there are three images; Side Swipe's jetpack that can be attached to Optimus Prime's back, dimensions of the completed set, and an assembled Optimus Prime standing on a living room table. 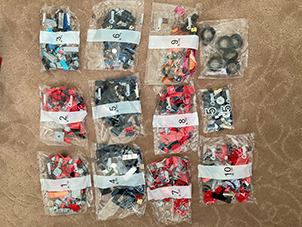 There are twelve bags of pieces, most numbered "1" to "10", with two bags labeled with "5" and one bag with tires that is unlabeled. Also included is a sticker sheet which is used for the display plaque, thighs, and waist plates. To my knowledge, one of the newer pieces is the plate pieces with the Autobot logo on it. 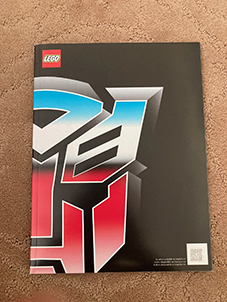 The instruction booklet is mostly filled with the Autobot logo, plus a QR code on the bottom right corner. The first few pages gives background to the Transformers franchise, Optimus Prime himself, the accessories, and a quote from Joe Kyde about the set. 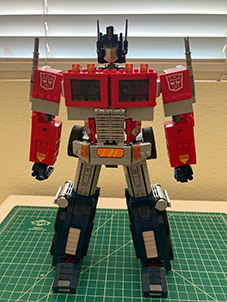 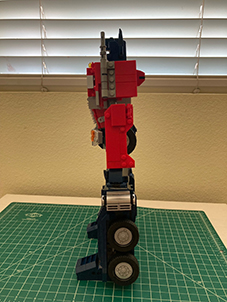 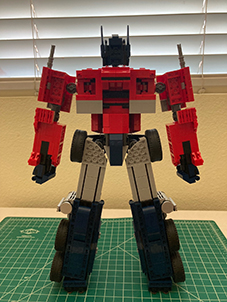 Following the instructions, one particular bag needs to be opened to build a component of Optimus Prime in his robot mode, followed by the accessories. Attempting to build after opening every single bag and dumping into one pile would have substantially increased the amount of time needed to build the set, so this method is a good way to organize and build in an optimal manner.

As you read the instructions, some pages have bits of trivia, whether it is regarding the canon or the original Optimus Prime toy. This provided an enjoyable quick distraction as you build the set.

Building each component and connecting them together, you can get a good idea of how the transformation works with how certain pieces move and fit with each other, especially if you are a Transfomers fan.

The completed model has decent articulation, although for its size and engineering, this is meant more as a display piece than a toy (given the front of the box indicates this set for ages 18+). A common complaint I've seen online is inability to bend its knees (it can only swivel around the knee), but again due to the size and engineering, having such articulation could have made standing up very difficult. It is still possible to modify to allow for knee bending with certain pieces if one wants to attempt it. The back has quite a few hollow sections that may seem unsightly, but can be easily covered up with the Jet Pack. The hands are able to move their thumbs and fingers, although if one wants individual finger articulation, the base plate that connects all three fingers can be removed.

For most issues similar to what was mentioned above, the fact that this is a LEGO set that can be modified with the addition or removal of pieces makes it easy compared to conventional Transformers toys that may require unscrewing and third party add-ons. 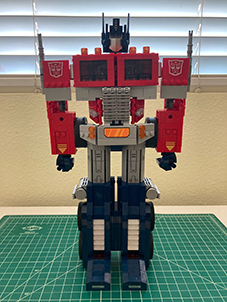 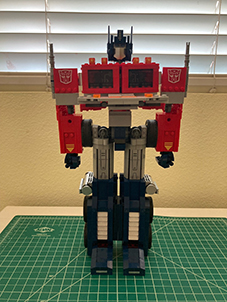 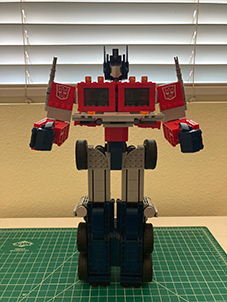 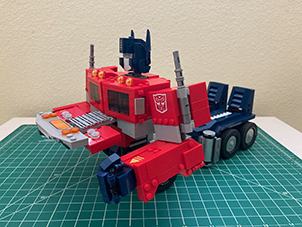 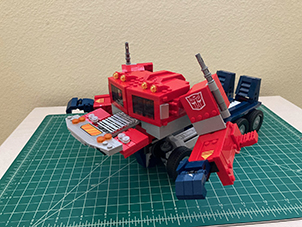 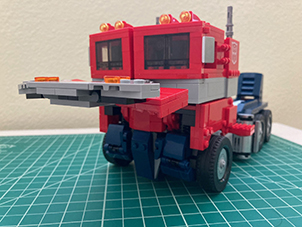 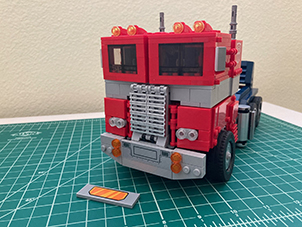 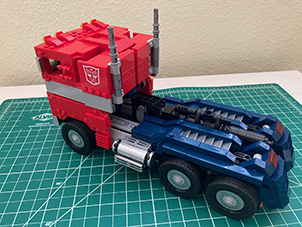 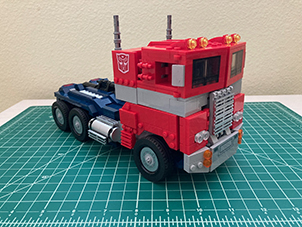 The transformation takes 18 steps and should be recognizable for whoever has assembled anything like the G1 Optimus Prime toy for the most part. The resulting vehicle mode resembling a red and blue White Freightliner WFT-8664T cabover semi-trailer truck is amazing in both design and the transformation from robot mode (and rolls well with its wheels on any flat surface). One interesting comparison to the original toy is that the hands were required to be removed for vehicle mode for the latter (something known as "partsforming" in the Transformers fanbase), whereas the LEGO set allowed for the hands to fold into the wheel wheels. The Ion Blaster is stored on the vehicle mode (after moving the handle) between what were the robot mode legs and has a hole on it for what is very likely to be a trailer hitch should someone build a trailer to connect to it. That was very thoughtful in the design. Unfortunately, the Energon Axe and Jet Pack have no documented way of being stored in vehicle mode, although it may be forgivable given the former is an energy weapon that forms from Optimus Prime's hand and the latter is a separate accessory all Autobots can obtain for themselves (that being said, it is still possible to attach the Jet Pack in vehicle mode connecting the black brick parts on the Jet Pack to some studs on the legs). 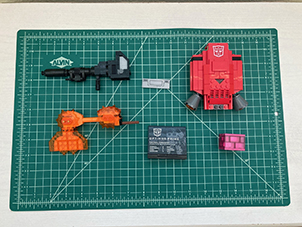 As shown on the back of the box, LEGO Optimus Prime comes with a number of accessories. 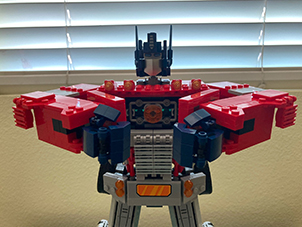 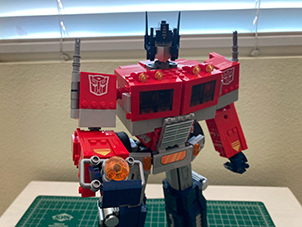 The Autobot Matrix of Leadership fits inside Optimus Prime's chest, which windows are able to be opened and allow for iconic poses. Surprisingly, the Matrix itself and how it is stored are both held together by friction for the most part. 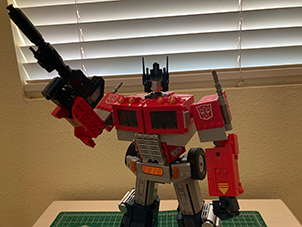 The Ion Blaster is a large rifle weapon that Optimus Prime is able to carry. It is not really held by the hands but rather held in place by connecting the back of the gun to the top of the arms. It is a secure fit however and the arm can hold the weapon with no difficulty. 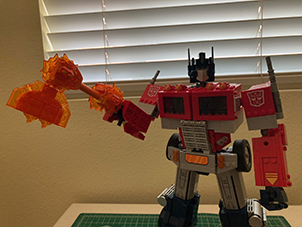 The Energon Axe is a large melee weapon formed from Optimus Prime's arms. He only used it for one episode in the cartoon, but the axe has been a common weapon for Optimus Prime in various toys and media. The instructions require removing on hand and moving the ratcheting wrist down to allow for clearance to attach the axe through an axle to a hole inside the arm. The blast effect parts do a good job indicating the energy properties of the axe. 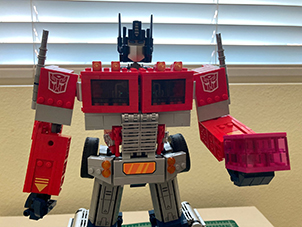 The Energon Cube is a simple translucent block like how it has appeared in various Transformers media. It is not documented to connect to anything on Optimus Prime but one can choose to attach it any applicable part of him. 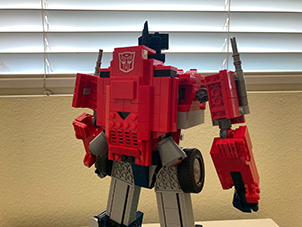 The Jet Pack is an item borrowed from the character Side Swipe in one episode of the cartoon. It attaches to Optimus Prime's back securely and the rocket parts can be angled. As mentioned above, the Jet Pack can cover hollow parts on Optimus Prime's back, although it will need to be removed for him to transform into vehicle mode. 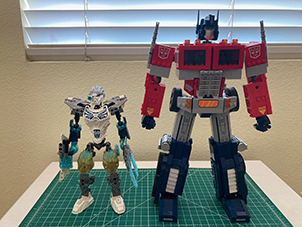 The completed model is quite imposing compared to say a BIONICLE set, like what we have here with Kopaka from Set:71311. Probably the only comparable BIONICLE set in terms of size would be Toa Mata Nui of Set:8998.

From what this set was able to achieve with robot mode, vehicle mode, and transformation, LEGO Optimus Prime is an excellent set any older Transformer (and LEGO) fans will enjoy. The references to the cartoon through its modes and accessories is much appreciated fanservice. One could hope that LEGO and Hasbro will continue to work together and provide more iconic Transformer characters in the future.