"Vezon yanked hard on the chain he held. In response, the head of the giant spider he rode jerked up. The creature bared its multiple vicious fangs and gave a savage hiss. It crawled a few paces toward the assembled Piraka, its red eyes glaring fiercely at them. There was something revolting about its every movement."
— Narrator, Inferno

The Fenrakk Spawn[2] species was created by the Makuta using Viruses and Liquid Protodermis to be one of the Rahi to inhabit the Matoran Universe.[4]

The Fenrakk Spawn colony established itself in the Southern Continent. When the Great Cataclysm caused Voya Nui to rocket to the surface of Aqua Magna, these area's Fenrakk Spawn survived the ascent and continued to live on the island.[2] Some Fenrakk Spawn were tamed by the Toa Inika and used as steeds. Nuparu did not truly trust these creatures, but Jaller claimed they were a key to defeating the Piraka.[LEGO BrickMaster] However, when the Toa Mahri shattered the Cord and returned Voya Nui to its rightful place below, these Fenrakk Spawn may not have survived the descent.[5]

After the Great Spirit Robot was critically damaged in the Battle of Bara Magna, many Fenrakk emigrated from the Matoran Universe to Spherus Magna.[1]

After making his way to the Chamber of Life, the insane Piraka Vezon attempted to steal the Kanohi Ignika. Upon touching it, he became cursed by its power. A male[6] Fenrakk Spawn[2] was enlarged as a result of the curse and fought Vezon. Soon, the Mask of Life fused Vezon to the spider, creating two new guardians for itself. Fenrakk gained Vezon's new power of absorbing kinetic energy, and the two waited for someone to claim the Ignika.[7][3]

Soon, the Piraka arrived to attempt to take the Ignika for themselves, but stopped short upon encountering their former ally and his vicious arachnid counterpart. Vezon defeated them easily, transforming Vezok and Reidak into a hulking combination of the two which dispatched the other four.

The Toa Inika soon burst into the chamber as well, just in time to see Vezon defuse the beast, rendering all the Piraka incapacitated. Fenrakk charged the Toa, engaging them in combat. During the battle, Vezon showed off their shared ability to absorb kinetic force by slamming Fenrakk repeatedly with a rock. The Inika managed to gain an edge in battle, but Fenrakk tapped his foot repeatedly on the ground, recovering his wounds. While fighting, Jaller attempted to force Vezon and his mount back towards lava, in order to get them to surrender. Much to the Toa's surprise, Vezon instead willingly urged his steed into the lava, where the Ignika transformed the enlarged Fenrakk into the Kardas Dragon.[8]

Fenrakk shared Vezon's ability to absorb kinetic energy.[10] In addition, while Vezon was in possession of the Mask of Life, this Fenrakk would come back in a stronger form each time he was defeated. This only occurred once, transforming it into the Kardas Dragon.[11] 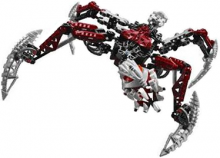 The enlarged Fenrakk in set form

8764 Vezon & Fenrakk was released in late 2006, containing both Vezon and the enlarged Fenrakk. Together, the two figures had 281 parts. Fenrakk's massive jaws could open and close, and two pins on his back allowed the Vezon figure to be attached. A chain attached to his neck also could be held by Vezon. The same Vezon and Fenrakk set was later released as a component of 10204 Vezon & Kardas. 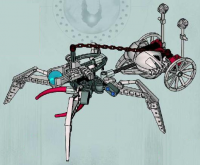 A Fenrakk Spawn Spider in the Piraka Stronghold set form

A Fenrakk Spawn Spider was released with the 8892 Piraka Outpost playset in 2006. This Fenrakk Spawn Spider appeared much larger relative to a Toa Inika or Piraka than the Fenrakk that served as Vezon's mount, due to the small size of the Toa Inika minifigures. However, this is non-canon, as all Fenrakk Spawn Spiders in the story are smaller than the enlarged Fenrakk.[12][9] This spider featured a platform mounted with a Zamor Launcher that held four Zamor Spheres.

A Fenrakk Spawn Spider drawing a chariot was included in the 8894 Piraka Stronghold playset. It also featured a Zamor Launcher, although its launcher only held one Zamor sphere. 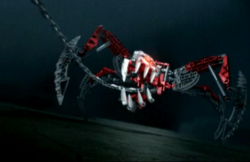 The enlarged Fenrakk in the 2006 Titan Commercial