"A wall of water a thousand feet high crashes into the realm of Karzahni, shattering buildings, leveling everything and everyone in its path."
— Toa Nuva Gali, Toa Nuva Blog

Water is an Elemental Power.

In the Matoran Universe, Water is often represented by the Matoran prefix Ga- as well as the color blue. Here, the only naturally occurring water was Liquid Protodermis. Despite this, these beings are able to control the water of Spherus Magna, because the substances are alike in composition and behave similarly in the life processes of Matoran Universe denizens. 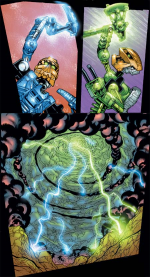 Water and Air combined to create a storm

All of the following have/had the Element of Water and/or its sub-powers:

Gali channeling a blast of water

All of the following locations are/were affiliated with Water: