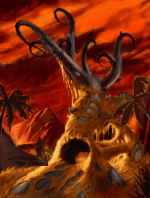 There was a Vuata Maca tree in each village.[3] They bore energy-rich fruit,[4] although they were perhaps best known as the power sources for the Koro. Energy from the tree was siphoned into the villages, and used by the Matoran for operating machinery and completing other daily tasks.[citation needed]

When the Bohrok were prematurely awakened by Teridax, Toa Mata Gali witnessed a swarm of Tahnok attempt to destroy a Vuata Maca tree in Le-Wahi.[6] In preparation for Mata Nui's awakening, the trees have since been successfully destroyed by the Bohrok.[citation needed: OGD?]