"The stars call it Voya Nui. But they have another name for it as well: 'the daggers of Death.' I fear the second name may be more accurate."
— Turaga Dume, Island of Doom

Voya Nui as part of the Southern Continent

During the final completion stages of the Matoran Universe, the area of Voya Nui was chosen by the Great Beings as the hiding place of the Kanohi Ignika. A population of Matoran improperly rebuilt by Karzahni was shipped from his realm to the Southern Continent as to not remind the ruler of his failure, and there they established a village they named Voya Nui, or Great Voyage, as a reminder of the great journey they had taken. The Order of Mata Nui stationed Axonn and Brutaka in this region to protect its local Matoran population and guard the secret of the Mask of Life's location. After the Matoran Civil War of Metru Nui, Voya Nui was part of the region overseen by Makuta Mutran.

During the Great Cataclysm, it was dislodged from the Great Spirit's body and was sent flying through the wall of the dome which contained the continent. In doing so, it created a hole in the continent's dome and the dome of Karda Nui, of which it rested on top of. Voya Nui eventually came to rest on the surface of Aqua Magna, and seawater from the planet began to flow through into the Matoran Universe. This action created the Giant Waterfall which flooded Karda Nui, resulting in the creation of the Swamp of Secrets. The Matoran managed to survive the ascent and continued their lives on the new island in the village they named Voya Nui.

Soon after the Great Cataclysm, the volcano in the island's center, Mount Valmai, erupted, creating a new part of the island covering the Voya Nui Bay. Voya Nui continued to drift as a floating island in a southern direction, and finally stopped when the coastal city of Mahri Nui built onto the new part of the island sank into the sea. The Cord, a stone tunnel filled with labyrinthine passageways, was created between Voya Nui and Mahri Nui and acted as an anchor, stationing Voya Nui in place above the Pit.

Five hundred years after the Great Cataclysm occurred, a hurricane swept over the island, causing great damage to the Matoran settlement. The Matoran population were able to escape harm by evacuating to caves to the east of the village during the storm. 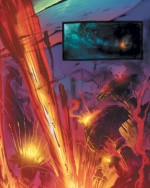 The seven rogue Skakdi Dark Hunters known as the Piraka learned of Voya Nui through a telepathic message sent by Makuta Teridax. Vezon abandoned the others and used a Toa Canister to arrive on the island, where he traveled to the Chamber of Life and was cursed by the Mask of Life and fused to an enlarged Fenrakk spider. The other six Piraka arrived soon afterward and posed as Toa to gain the trust of the local Matoran and use their labor to find the mask and construct the Piraka Stronghold, later using Zamor spheres filled with Antidermis to enslave the Matoran, except the Voya Nui Resistance Team who escaped.

After the Matoran of Mata Nui returned to Metru Nui, the Toa Nuva traveled to Voya Nui to claim the Kanohi Ignika and save the life of the Great Spirit. However, they were defeated by the Piraka and nearly killed before a volcanic eruption from Mount Valmai inadvertently saved them. Joining forces with the Voya Nui Resistance Team, the Toa Nuva confronted the Piraka again but were swiftly defeated. The newly-transformed Toa Inika soon joined the conflict, battling both Piraka and fallen Order of Mata Nui member Brutaka before both the Piraka and Toa confronted Vezon, guardian of the mask, the then Inika managed to momentarily claim the mask. The Kanohi Ignika escaped the possession of the Toa and traveled to Mahri Nui, with the Toa in hot pursuit.

When the Toa Mahri destroyed the Cord, Voya Nui was returned to its former position in the Southern Continent. Much of its landscape was destroyed. Despite this, the Matoran, having taken refuge in the Nui Caves, successfully returned to the Matoran Universe in safety and began rebuilding their settlements.

After the defeat of Makuta Teridax, the continent's inhabitants, along with the rest of the universe's inhabitants, emigrated from the Matoran Universe onto Spherus Magna and Voya Nui, along with all other locations, was dismantled.[1][2]

In this alternate universe, the Toa Gaaki, Bomonga, and Pouks, operating at the behest of the oppressive dictatorship of the Toa Empire, killed Brutaka in order to proceed with an inspection of Voya Nui.

Voya Nui is a crescent-shaped area that dominates much of the Southern Continent. Home to the Kanohi Ignika, many of the island's geographic features reflect this, including the Green Belt, a perpetual area of forestation. It was home to a large population of Matoran, who were poorly repaired and sent there by Karzahni.[3] The Matoran created a variety of locations, including a Cavern of Historical Records, as well as a Canyon Fortress and Matoran Stronghold. The area also lay on top of the Nui Caves, an extensive network of caverns originally home to Av-Matoran. Other geographical features include a pointed rock feature known as Needle Rock, the Cape of No Hope and the Desert of Sorrows. 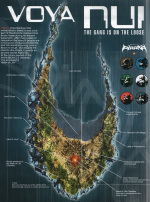 A labeled map of Voya Nui

It became an entire island when the Great Cataclysm ripped it from the Southern Continent, sending it straight through the shell of the Matoran Universe and coming to rest floating in the waters of Aqua Magna. A Ring of Ice eventually accumulated around the island, barring almost any sea access to it. After becoming a separate island, Voya Nui faced many hardships, including droughts and famine. The island was extremely dangerous, as it was often beset by unexpected earthquakes, lightning storms,[4] volcanic eruptions and other dangers such as Rahi. Because of this, the Matoran of Voya Nui all united together in a single village for unity and security. Resources such as water and food were often scarce on the island, forcing the Matoran to scavenge for what they could find. When the Piraka arrived on Voya Nui, they built a massive fortress, as well as several ouposts and tampered with the lava reserves on the island by attempting to drain the lake, believing the Ignika to be at the bottom.

At the center of Voya Nui is the active volcano Mount Valmai, named after an ancient Matoran term for "cursed place", surrounded by a Lake of Lava.

Path to the Ignika

The Great Beings designated Voya Nui as the hiding spot for the Ignika, and created a pathway to underneath the island. Along the pathway are several traps and chambers, all designed to keep the unworthy from possessing the mask. Beginning at the 777 Stairs carved into the volcano, the path goes through the Zone of Nightmares, the Chamber of Death, past the Lava Chamber Gate and ending in the Chamber of Life, where the Ignika is intended to be housed.

When Voya Nui was an island, the inner area of the crescent became known as Voya Nui Bay. Lava flowed to here from the volcano, eventually forming enough land to colonize. The Matoran built another settlement there, which they called Mahri Nui. However, the unstable ground eventually gave way, causing Mahri Nui to sink. Due to the surrounding ring of ice, the Lagoon Entrance was the only safe way to enter the bay.

The Matoran were the main inhabitants of the island. Due to the constant dangers, they all lived together in one single village. The Matoran here also were all rebuilt by Karzahni prior to being relocated to the Southern Continent. In order for the Toa Mahri to destroy the Cord, the Matoran of Mahri Nui migrated to Voya Nui. After the island was returned to its place, they all lived together on the Southern Continent. However, due to the critical damage sustained by the Great Spirit Robot in the Battle of Bara Magna, they have since immigrated to Spherus Magna.

Voya Nui was home to many Rahi species. Below is a list of Rahi which were known to reside on Voya Nui.

The Great Beings, and later the Order of Mata Nui, posted these beings on Voya Nui as guardians of the Kanohi Ignika.

Voya Nui as it appeared in BIONICLE Heroes