The Vorox are the warriors of the Sand Tribe, and members of the Glatorian species. After the Shattering, the Vorox on Bara Magna reverted to a near animalistic state; they did not participate in the global social system, but would fight in the arena when forced to. Other Vorox trapped on Bota Magna did not regress socially as the ones in the desert did, instead forming their own civilization.

During the Core War on Spherus Magna, they fought for Energized Protodermis in service of their tribe, battling in the plains of Bara Magna under the Element Lord of Sand, and were known for their primal battle tactics. After the Shattering occurred, the Vorox on Bara Magna began to regress to a more primal state, eventually losing all individual identity. The Vorox were treated as a lesser class due to their barbaric nature, and were often killed or captured by Bone Hunters for sport. The Skrall, after discovering the bestial nature of the Vorox, began imprisoning them in Roxtus for a variety of purposes, occasionally buying them from the Bone Hunters. Some were used for training and torturing, while others were taken north to test for the presence of Baterra. They retained their connection with the Zesk, the Agori of the Sand Tribe, who similarly reverted to barbaric tendencies after the cataclysm struck.

The Vorox of Bota Magna did not respond to the disaster as the ones on Bara Magna did, instead retaining their sapience. They established a city for themselves on the Bota Magna shard.

The Glatorian Malum was exiled from his village, and encountered a group of Vorox in the wastelands. By attacking and defeating the leader, Malum was able to gain the allegiance of this pack. 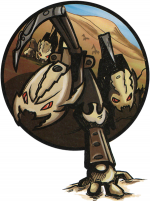 Several Vorox emerging from the wastelands

Six Vorox ambushed Gresh and Berix as they were traveling through the wastes, forcing the duo to take shelter in the ruins of an old arena. One of the Vorox later tunneled into the arena and attacked Gresh, but was scared off by one of the practice dummies. When the sun rose, the Vorox attempted to attack the arena again, only to encounter several of the dummies set up by Gresh and Berix. The six Vorox, frightened by the dummies, fled into the sands.

Three of the Vorox under Malum's leadership later encountered and attacked Gresh, Strakk, Tarix, and Berix. During the battle, however, Malum signaled for them to retreat. 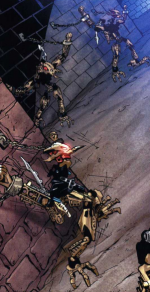 Malum and his pack of Vorox later attacked a patrol of Skrall while they paused, but broke off the attack before disappearing. The patrol, reinforced in numbers, returned the next day to capture Malum. Expecting a trap, the ex-Glatorian had the Vorox create a fake trail to throw the Skrall off. Once the Skrall platoon arrived, they attempted to ambush the Sand Tribe members, only to be ambushed themselves. In the ensuing battle between Skrall and Vorox, the squad leader managed to capture Malum, and ordered the Vorox to retreat. Several attacked the Skrall, only to be cut down. The rest stood by, and allowed the Skrall to leave.

Several Vorox, who had been brutally tortured during their captivity in Roxtus, were brought out to fight Malum, in order for Tuma to see how he could tame the beasts. Malum quelled the Vorox, and tricked the Skrall into trying a similar calming technique. The Vorox attacked the Skrall, and fled the city with Malum.

An Agori sent by Raanu to find a means of defending Vulcanus went looking for Vorox to try and turn against the Bone Hunters. He encountered one in a wasteland cave and was attacked by a Vorox. As the Vorox opened its jaw, the Agori waved his Vulcanus Torch in its face and quickly escape. Later, the Agori was given musk from a Zesk. The Agori proceeded to give the Vorox several of the Thornax Stews the Zesk had enjoyed, and was given a Stinger Oath in return, forming a peace treaty.

Malum and his Vorox later traveled to Roxtus to recover a Flame Sword who had been stolen from them by the Bone Hunters. On the way, they fought and defeated Fero, before witnessing a convoy made up of the Agori Tarduk and Kirbold and escorted by Gresh and Strakk emerge from a tunnel in the Black Spike Mountains. The beasts captured the Agori and Malum blackmailed the two Glatorian into recovering the sword from the Skrall. However, the two Glatorian returned to the Vorox camp to take the wagon and the Agori back. Gresh used a shining stone to scare the Vorox, who thought him a ghost. However, Malum revealed the trick and the Vorox pursued the caravan, only to witness it falling into the Dark Falls.

Malum and the Vorox later re-encountered the group who had been joined by Ackar and Kiina, who were being pursued by the Skrall. To escape, Ackar pretended the Vorox were on their side, tricking the Skrall into attacking them. While the caravan fled, the Vorox took heavy casualties and retreated, confident in the Skrall's inability to pursue.

Gelu and Gresh were assaulted by a group of Vorox while escorting a caravan to Vulcanus. The two Glatorian assisted each other in fighting off the bestial warriors, and succeeded.

A Vorox in BIONICLE: The Legend Reborn

Malum was approached by Gelu and Ackar, who sought assistance from Vulcanus in defending against the Bone Hunters. The Vorox were initially curious about the two Glatorian, but soon became hostile at Malum's command. The ex-Glatorian agreed to help them, and led his Vorox to a Bone Hunter encampment. The Vorox tunneled underneath the sand and struck at the Bone Hunters. Several Vorox were killed in the resulting battle, but they managed to wound many Bone Hunters as well. The Sand Tribe warriors retreated on the order of Malum, and returned to his shelter. Malum claimed a victory over the Hunters, and the Vorox loosed a savage war cry in celebration.

Mata Nui, after landing on Bara Magna, was attacked by a lone Vorox. It thrust its stinger tail at him, but Mata Nui broke it with his shield. The Vorox then retreated from the fight.

Much later on, Metus tried to escape Roxtus in his Thornatus, but was stopped by two enraged Vorox he had ordered to be released to fight against the Glatorian. The Agori contemptuously ordered them to get out the way. The Vorox, however, instead tipped over his vehicle, causing him to fall out.

Later, Mata Nui, having taken control of the Prototype Robot, warned the inhabitants of Bara Magna to hide, as to not be affected by the oncoming battle. The Vorox, frightened by his voice, retreated underground immediately.

After the Battle of Bara Magna, the Great Being Velika made contact with the Vorox of Bota Magna, informing them of their kin's regression and poor treatment on Bara Magna. He also supplied them with sophisticated blasters and a device capable of shutting off a Toa's Elemental Powers.[1]

When Gelu, Orde, Chiara and Zaria traveled to Bota Magna to find the Great Beings, they were captured by several of these Vorox. The leader of the group, Kabrua, explained to Gelu the history of the Bota Magna Vorox. He then ordered the prisoners taken back to the Vorox's city. The next day, Kabrua escorted his prisoners to the edge of the woods. He organized a hunting pack, and released the unarmed Toa into the woods. The Toa attempted to organize an ambush, but several Vorox used Velika's device to hinder the powers of Zaria and Chiara. While those Vorox stayed behind, the rest of the group, led by Kabrua, followed Gelu and Orde's tracks to a river, and prepared to cross in search of their prey. Orde, using his Psionics power, read Kabrua's mind and learned of his alliance with a Great Being, though he did not learn Velika's identity.

A Vorox firing its Thornax Launcher

As a result of being altered by the Great Beings, all Vorox possess powerful stinger tails, which they use to subdue their enemies. The Sand Tribe warriors were also known to be very aggressive.

Due to the Shattering, Vorox on Bara Magna retain very little sapience, and have organized themselves into an animal-like society, with pack leaders heading a group. These packs can have anywhere from five to fifty members, depending on what the pack has set out to do, and war parties sometimes number well over one hundred. They can manage a broken version of the Glatorian language, but rarely choose to speak it. Instead they speak their own language, consisting largely of whistles and hand movements. Within that language, individual Vorox also have names. The Vorox identify allies of the Sand Tribe by a distinctive musk which the Zesk can regurgitate as a slimy fluid.

They react primitively to phenomena such as fire or lightning. In addition, Vorox are often drawn to bright objects such as treasure and armor, with individuals willing to fight members of their own pack in order to obtain them for themselves. Although they did not participate in the Bara Magna social system, the Vorox were occasionally forced to participate in arena battles.

Vorox often prefer to hunt during the night, and normally prefer to sleep in their underground tunnels during the day. They have developed a vast system of tunnels beneath the wastelands for travel.

The Vorox residing on Bota Magna still retain full intelligence and sapience. They have also constructed a city for themselves.

Bara Magna Vorox are known to use crude swords and spears, weapons they had before the cataclysm, and Thornax Launchers. They will also use their stingers if they feel it is necessary. Bota Magna Vorox wield powerful weapons given to them by Velika, which are capable of launching spheres of explosive force.

A Vorox set was released as one of six Glatorian canister sets in early 2009. It contains fifty-one pieces, among them a Thornax fruit and a rotating "life counter" piece on its ankle which indicates the Vorox's health in the BIONICLE Action Figure Game. The Vorox set and its canister are both used in the game.

"Hungry or just angry, you think?"
"Probably both."
"Since when do Vorox need a reason?"
— Gresh, Tarix, and Strakk, Sands of Bara Magna

"It's clear you can fight if you can defeat a Vorox, and there aren't many Agori who can do that."
— Metus, The Legend Reborn

"Vorox were creatures of the open desert. They hated captivity or being forced to travel one way or the other. Any chance to escape was seized upon. It wasn't unusual to return from one of these missions with fewer Vorox than one had at the start."
— Narrator, Empire of the Skrall

"I know something of how the Vorox were treated in the desert these past years. Hunted, hounded, treated like monsters ... all by the so-called intelligent races. Perhaps it might be a good idea for you and your companions to experience some of what they experienced ... it could prove to be a valuable lesson, if inevitably your last one."
— Kabrua, The Yesterday Quest