"Voporak reached out and grabbed his attacker. In a matter of seconds, the warrior aged tens of thousands of years before collapsing on the ground."
— Narrator, Destiny War

Voporak is a time-sensitive servant of the Dark Hunters and a former clan leader on Stelt. 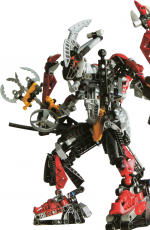 Voporak was once a member of Sidorak's species and a clan leader on the island of Stelt. Seeking to usurp his position of power, Sidorak encouraged the Makuta of Stelt to select him for experimental mutation. By combining Energized Protodermis, Roodaka's mutation Rhotuka, and other mutagenic substances, they transformed Voporak into a being sensitive to shifts in time, one that would be able to locate the Kanohi Vahi if it ever came into existence. The Makuta of Stelt lent this being to the Dark Hunters to learn discipline, but Voporak became loyal to the Hunters rather than the Brotherhood as a result.

Voporak, along with the surviving residents of the Matoran Universe, evacuated the Great Spirit Robot with the Vahi after Teridax was killed.

Voporak has Time-based powers. He can willingly give off a temporal force field that drastically ages anything thrown at him, this power becoming extremely potent through touch. His abilities however have no effect on the Mask of Time itself. Voporak is also sensitive to fluctuations in the fabric of time, allowing him to sense the use of and track the Kanohi Vahi. His Rhotuka has the ability to distort an opponent’s sense of time, knocking their perception of time backwards by several seconds. 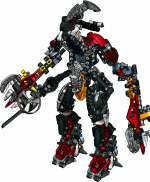 Voporak was released in late 2005 as a combiner model of parts from the Roodaka, Keetongu, and Sidorak sets. He was also released as a Target store-exclusive set containing 647 pieces. The Voporak set features a Rhotuka launcher which, unlike most launchers, is operated by pulling the launcher construction off of the ripcord, the latter of which is attached to one of the set's six limbs. This operation launches the Rhotuka spinner from the set at high speed. Voporak's uppermost limbs each hold a sort of claw on the wrist comparable in function to Roodaka's Catcher Claws.