This article is about the species. You may be looking for the island.

"No one knows where the Visorak came from or why. Those few who have mastered their language claim that Visorak means 'stealers of life' and others say it means 'poisonous scourge.' Either way, no truer words have been spoken. Fear them, for they are a plague upon the land, leaving nothing but pain and fear behind them. "
— Toa Hordika Whenua, Challenge of the Hordika

The Visorak are spider-like Rahi that once made up a large portion of the Brotherhood of Makuta's army.

The Visorak were first created by Makuta Chirox on Tobduk's home island. After Chirox named them, the Visorak created their own language, attributing the meanings "stealers of life" or "poisonous scourge" to their species name.[1] Following their creation, they were unleashed on Tobduk's village to test their skill. The Visorak devastated the island, with only a few of its inhabitants managing to escape to Nynrah. This island was later re-named Visorak after the creatures who had ravaged it.[BIA, Ch. 6] Despite the renaming, the world at large was unaware of the origins of the Visorak.[2][1]

Chirox subsequently created the Heart of the Visorak,[3] an artifact that had the ability to summon any and all Visorak no matter how far they were. Makuta Gorast used it to gather the Visorak[citation needed] and conquered them.[4] They were then incorporated into the Brotherhood of Makuta's military.[C25]

Visorak among the Brotherhood of Makuta's army

75,000 years ago, Spiriah took several Visorak with him to Zakaz, where he assigned them to monitor the Skakdi, who had been granted powers. In Spiriah's absence, the Skakdi wiped out the Visorak.[5]

2,500 years ago, Makuta Kojol formed a strike team consisting of Visorak, Rahkshi, and Exo-Toa on a mission to invade Artakha and steal the Kanohi Avohkii. The Visorak were promptly eliminated by the Crystal Serpents.[TMC, Ch. 8] 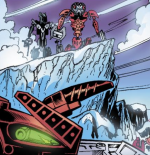 1,300 years ago, the Visorak were joined under the rule of Sidorak and his Viceroy Roodaka to create the Visorak Horde. They invaded several inhabited lands to defeat any potential obstacles to the Brotherhood and seal all remaining living beings in cocoons before moving on.[C24]

Toa Lesovikk once defended an island to the south from the Visorak.[6]

During another invasion, Toa Chiara electrocuted the Colony Drones stationed with the Visorak. As the Visorak left to find more food sources, they were individually picked off by Chiara.[TYQ, Ch. 1]

Several Visorak attacked Ba-Koro and were killed by Ba-Matoran.[RoS, Ch. 9]

Some scouts from the Visorak Horde[citation needed] became stranded on Voya Nui due to the Great Cataclysm.[7]

When Makuta Teridax was trapped in a Toa Seal, he summoned the Visorak Horde to his aid.[8] The Visorak Horde quickly descended on Metru Nui, spreading webs throughout the city, securing the sleeping Matoran, and establishing a strong presence in the city. Sidorak and Roodaka chose the Coliseum as their fortress and base of operations.[2]

Upon returning to rescue the Matoran, the Toa Metru were captured and mutated into Toa Hordika. To free Teridax and gain complete control of the Visorak, Roodaka arranged for the Toa to fall to their deaths after their mutation. This plan was foiled by the intervention of the Rahaga, who rescued and allied with the new Toa Hordika.[2] With the Toa Hordika and Rahaga fighting together, the Visorak began to suffer setbacks, including the seizing of a command tower.[1] 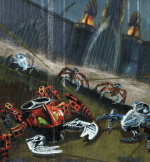 Visorak in front of a Brotherhood fortress

500 years ago, a band of Visorak stragglers attempted to attack Metru Nui. They were quickly defeated by the Rahaga, Keetongu, and Turaga Dume.[TDR]

The Brotherhood of Makuta eventually reformed their army of Visorak.[10] They served as guardians of the Brotherhood base on Destral and a formidable army against the Dark Hunters. The Visorak led a semi-successful raid against Odina, causing considerable damage and casualties.[citation needed] Rumor said that Sidorak's species were also attempting to assemble the Visorak.[11]

As per the Scroll of Preparations, Toa Nuva Pohatu and Onua recovered the Heart of the Visorak from the Tren Krom Peninsula and brought it to the Order of Mata Nui.[TNB] Johmak gave the Heart of the Visorak to the Toa Mahri and ordered them to use it on Artidax. Jaller, Nuparu, and Hahli traveled there, closely followed by the Visorak, who assembled on the island.[DID, Ch. 4] There, they came across the three Toa Mahri, who were hypnotized by Takadox. However, the Toa managed to break free of their hypnosis and escape the island. The Visorak remained trapped on the island, and were wiped out when the volcano on the island erupted.[DID, Ch. 6]

Makuta Teridax recreated the Visorak after taking over the Great Spirit Robot.[12]

When Mata Nui injured Teridax in the battle of Bara Magna, some circuits within his body were fused together, causing system failures and a molten protodermis leak. Teridax sent several Visorak to contain the damage.[13] After Teridax was killed, the Visorak became a wild species and emigrated to Spherus Magna.[OGDi: Apr 4 2010, 12:11 PM][OGDi: Apr 7 2010, 01:19 PM]

A dead Visorak was placed in the Metru Nui Archives as a trophy of the Toa Empire.[DM]

After Mata Nui died, the Visorak migrated to the island of Mata Nui with many of the universe's other beings. Some of them work with the Matoran, while others are performers.[TK]

Visorak are large, quadrupedal spider Rahi. They come in seven different breeds. Each breed possesses a unique Rhotuka spinner power and other abilities.

All Visorak could be gathered together with the Heart of the Visorak, regardless of how far they would have to travel.[TNB, Ch. 10] Aside from breed-specific powers, all Visorak also possess a store of unique venom called Hordika Venom. The venom transforms its victim into a twisted, primal form that is far more aggressive than usual. Keetongu is the only being known to be able to cure mutated victims, but cannot help the victims past a certain threshold.[9] The Visorak themselves are immune to the venom.[OGD]

Visorak also have the ability to produce webbing. Visorak webs are green, produced from the mouth or abdomen. The Visorak use the webs to get around quickly, and to communicate with other Visorak by sending vibrations across the strands of webbing. After the Great Cataclysm, the Visorak covered Metru Nui with the webs as part of their takeover.[C22] The Matoran worked to clear the webs,[14] but abandoned the effort after Teridax's death.[13]

There are six breeds of Visorak.

Six of the Visorak breeds were released as forty-seven piece canister sets in the winter of 2004/2005 in Europe, and in summer of 2005 for North America. Pressing the Visorak's shell caused its mandibles to squeeze together. Each of the Visorak canister sets contained two silver Rhotuka spinners, storage for which was found in the canister's lid. One of these spinners featured a code in the Matoran Alphabet which, when combined with a three-character prefix from the canister, could be entered for points at the Kanoka Club at BIONICLE.com.

The six canister Visorak sets can be combined in order to create the Zivon model.

Kahgarak were released in 2005 once as a combiner and twice as part of a playset.

Visorak minifigures, one for each of the six primary breeds, were released in the 2005 playsets. Each one was a combination of black and glow-in-the-dark plastic.

"Legend says they have overrun hundreds of lands, wrapping the inhabitants up inside web cocoons. And when they emerge, they have become... well, you don't want to know what they've become."
— Toa Metru Whenua, Monsters in the Dark

"Their tone is angry. Now is the time to strike."
"Too simple. Nothing in this city is worth hunting. Sidorak promised us good sport, remember?"
"I remember. I remember what Roodaka did to the last one who complained, too."
— Two Oohnorak (translated from Visorak language), Vengeance of the Visorak