The Venom Talon is a bladed weapon carried by the Glatorian Vastus.

The Talon contains a venom which can paralyze opponents, though use of this venom was often prohibited in arena combat. The venom is taken from the Talon Snake. A Thornax Launcher is also affixed to the end of the Talon. 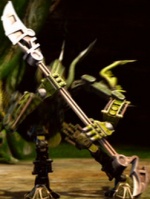 Vastus using the original form of the Venom Talon

Following an arena match against Tarix in Tesara, Mata Nui used the Kanohi Ignika to repair[1] and enhance Vastus' Venom Talon, and gave him Elemental Power of Air, which he can channel through the Talon.

Vastus used the Venom Talon to paralyze a Bone Hunter in Raid on Vulcanus.

The Venom Talon was included in the Vastus set of 2009. Its head is blended from silver and dark green plastic, and a tube that runs in a helix along its length is made of a soft, rubbery plastic blended from dark green and transparent colors. It is constructed from seven pieces, not including the Vastus set's hands, which hold it together, or the Thornax Launcher.