"This is our world - this, right here, shrouded in vines and too close to Roxtus for my liking. We both saw Atero crumble. Well, not again, not to my village."
— Glatorian Vastus, Raid on Vulcanus

Vastus is the prime Glatorian of the Jungle Tribe on Bara Magna. 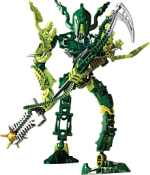 Vastus as a set

During the Core War, Vastus was enlisted by the Element Lord of Jungle to fight for the control of Energized Protodermis, and led troops as a field commander. The war was ended by the Shattering, which struck the planet, shattering it into several pieces. Vastus was isolated on the largest fragment, Bara Magna, along with many others. When the tribe joined the developing social system, Vastus became a Glatorian, and eventually became the prime Glatorian of the village of Tesara.

Vastus once won the Great Tournament in Atero, and reigned as champion for a year.

Vastus recently participated in three consecutive battles for the Jungle Tribe. When the Jungle Tribe was drawn into a dispute with the Rock Tribe, Vastus was unable to fight due to fatigue.

Along with the other Glatorian, Vastus traveled to Atero in order to participate in the Great Tournament. During the first match of the tournament, the arena was invaded by an army of Skrall. Vastus and the other Glatorian attempted to repel the Skrall forces, but were eventually overpowered, and forced to flee the city.

Gresh approached Vastus as he was training in Tesara, requesting the Prime Glatorian's assistance in defending the city of Vulcanus from Bone Hunters. Vastus, not wanting to leave Tesara undefended, declined Gresh's invitation, and Gresh departed the village.

The defense team of Glatorian pleaded for his help again, after being discharged from service by Raanu. Vastus agreed, and traveled with the group to Vulcanus. Upon arriving in the village they found it under siege by the Bone Hunters. The Glatorian eventually overwhelmed the raiding party, and saved the village.

Vastus later took the Agori Tarduk and Gresh to the outskirts of Tesara, in order to construct a new wall for extra defense. While listening to Tarduk's tales of his recent adventures, Vastus fired a Thornax at a potential hiding spot, striking Fero, who was lying in wait. While searching through Fero's possessions, Vastus found a Skrall shield. Vastus then spotted a brightly lit object flying through the sky.

As a result of the actions he committed during the Core War, Vastus is extremely guilt-ridden, and seeks to atone for his crimes.

Vastus carries a Venom Talon, which has a Thornax Launcher affixed to the end of it.

Vastus was released as one of the six "Glatorian Legends" canister sets in the latter half of 2009. The set contains 52 pieces including a life counter for use in the BIONICLE Action Figure Game.

"Four to one? Didn't I teach you better than that? It's not fair unless it's six to one."
— Vastus, Raid on Vulcanus