"I am Umbra. I guard the Mask of Life. You shall not pass."
— Umbra, Inferno

Umbra is an ancient and devoted guardian of the Kanohi Ignika, the Mask of Life.

The Great Beings created Umbra more than 100,000 years ago. He was the first being the Great Beings tasked with guarding the Mask of Life.[1][2] Umbra was stationed beneath Voya Nui as the final challenge along the 777 Stairs.[IC4][3] Although he is a being of light, he was given the name "Umbra" to confuse enemies as "Umbra" is a Matoran word for the darkest part of a shadow.[4][5][6]

Around 79,100 years ago,[citation needed] a team of Toa led by Toa Jovan encountered Umbra as they sought the Ignika.[9] They fought and defeated Umbra, gaining entry to the Chamber of Life. Jovan later replaced the mask, allowing Umbra to continue his duty.[10]

The Toa Inika also had to battle Umbra to reach the Chamber of Life. The Toa were fighting the Protodax when Umbra scared the savage beasts off so the Toa could die more honorably at his own hand. Umbra used his incredible speed to disarm the heroes, but he was stopped when Matoro used his elemental power to make Umbra slip and crash. Umbra then attacked as a laser-like beam of light, but Matoro responded with more ice, causing the walls of the cave to become reflective. Nuparu then lured Umbra into hitting the walls, causing him to wildly reflect off of them until he was knocked unconscious.[IC4][3]

After the defeat of Makuta Teridax, Umbra, along with the rest of the inhabitants in the Matoran Universe, immigrated to Spherus Magna.[11][12] There Umbra will continue guarding the Ignika.[13]

Umbra is very cold and completely dedicated to his job. Even if he knows those who come his way are heroes, it does not matter to him; they have to prove their worth by defeating him.[14] He will try his hardest to beat his opponents to honor his duty, not for pleasure.[15]

Umbra skating along the cavern wall

Umbra wields a variety of Light powers; though these powers that are less extensive than the elemental ones of a Toa of Light, Umbra can do some things that they cannot, such as transforming himself into a beam of light. He can form Rhotuka spinners that create hard light projections.[16][17][1]

Umbra is the only known being created without inner shadow.[18] As a result, if Umbra's inner light were drained, he would die.[19]

Umbra carries a Laser Lance that fires lasers and features a Rhotuka Launcher. Umbra also has skates on his feet that let him travel at high speeds.[1][2] These wheels allow Umbra to travel on walls and ceilings.[IC4][3]

8625 Umbra was released in Wal*Mart shopping centers in the United States as a promotional item, but it was available in other stores elsewhere. The set contains 179 pieces. The set features three battery-powered light-up elements: Umbra's head features the orange eye piece introduced in the Piraka sets, and Umbra's Laser Lance contains the elements representing Hewkii's Laser Axe and Matoro's Energized Ice Sword. The eyepiece lights up when its button is held down, and the weapon pieces flash when their buttons are pressed. The Laser Lance also features a Rhotuka Launcher. Umbra's Rhotuka spinner was dark green blended with silver, a color combination previously available only in the Rhotuka collectible pack. 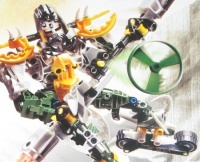 "The Protodax are violent beasts. They do not kill with honor -– they simply kill. I leave to them the simple-minded Rahi who accidentally wander down this far, but those with heart and spirit are mine to destroy."
— Umbra, Inferno

"Insanity. How can a mere Kanohi be worth so many lives?"
"If you do not know its worth, then why are you here?"
— Toa Inika Hahli and Umbra, Inferno

"You cannot even begin to match my power. But I will be merciful -- In my light form, I can slay you swiftly and cleanly."
— Umbra to the Toa Inika, A Cold Light Dawns