"You are so wise, Gali, yet know so little. You are swimming in my wake, Toa. There is nowhere you can go that I have not traveled before."
— Turaga Nokama, Tales of the Masks

A Turaga is the final form of a Matoran's life. After completing their respective Destiny, a Toa can sacrifice his or her Toa Power for the greater good and become a Turaga.

The former Turaga of Mata Nui gathered around the Amaja Nui

As with Toa, the first Turaga was created by the Great Beings already in the form of a Turaga, without having been a Toa or a Matoran beforehand.[2][3] Turaga later came into existence as the final stage of a Matoran's life. A Toa could become a Turaga after they have completed their Destiny and given up their Toa Power. Turaga were deemed the wise leaders of Matoran, and directed the villagers while the Toa protected them.

Metru Nui has always had a Turaga to watch over it. During the Matoran Civil War, the Turaga was ineffective, and could not halt the fighting, leading to the Great Disruption.

79,100 years ago, a Toa named Jovan, whose team saved the life of Mata Nui from the Great Disruption, sacrificed his own Toa Power and became the Turaga of Voya Nui. Several other members of his team also gave up their Toa Power, and became Turaga in other regions of the universe.

Around 15,000 years ago, a Toa of Fire named Dume was transformed into a Turaga, and made leader of Metru Nui. Dume led the Matoran for the next 14,000 years, defending it against Rahi attacks and Dark Hunter invasions until Makuta Teridax silently abducted and impersonated him as part of his plan. Another Toa of Fire named Lhikan also became a Turaga briefly after sacrificing his powers to create a set of six Toa Stones. He subsequently perished in the midst of a battle with Makuta Teridax, but was revived inside the Red Star, and remained trapped inside due to a malfunction.

After the Great Cataclysm struck the Matoran Universe, Jovan was killed, and the Matoran of Voya Nui were forced to rely upon themselves for guidance. Jovan himself was revived and trapped on the Red Star.[4]

Six Toa, after rescuing the Matoran of Metru Nui and hiding the Great Kanohi on Mata Nui, completed their destiny and became Turaga. They led the Matoran of Mata Nui for the next thousand years, helping their villages defend against Rahi attacks and Teridax's harassment. The Turaga offered their wisdom to the Toa Mata once they arrived on the island, though they withheld key information from them about Metru Nui. Upon returning to the city, they, along with the real Dume, became the leaders of Metru Nui. They were imprisoned in the Coliseum after Teridax's takeover the universe, and the traitorous Matoran Ahkmou took their place as the new "Turaga" during the remainder of Teridax's reign.

After the Great Spirit Robot was destroyed and Teridax was killed during a battle, the surviving Turaga in the Matoran Universe immigrated to the newly reformed Spherus Magna. As two worlds came together to form a new society, Turaga lent their guidance and served as ambassadors for the Matoran people to the Agori.[5][6]

Turaga are usually wise beings, with years of experience of leading Matoran. Turaga are slightly stronger than the Matoran, but are much weaker than Toa. The elemental abilities of a Turaga are significantly weakened upon their transformation,[7] although they can still conjure up small amounts of their elemental power;[8] it would not be worth the effort for a Turaga to attempt the equivalent of a Toa's Nova Blast.[9] Despite the transformation, Turaga can still maintain the concentration necessary to activate and use Noble Kanohi.

Upon their transformation, a Toa's Great Kanohi is altered in shape and reduced in power to become a Noble Kanohi. Turaga usually carry a Badge of Office, a symbol of their leadership status. This tool is usually their Toa Tool transformed, though they have been known to fashion their own. 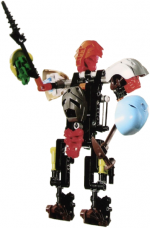 Another type of being, called a Turaga Kaita, can be formed by the fusion of three Turaga. Both Turaga Kaita and Turaga Nui would have increased strength as a result of the merge.

The Turaga of Mata Nui in Quest for the Toa

Turaga are held in high regard by the Matoran and Toa, and the decisions they make are rarely disputed. Matoran rely on their Turaga for guidance, and Matoran settlements without them often have a hard time coping on their own. Other species do not always respect the Turaga, as they are not integrated with the Matoran society.

The Turaga are also a frequent target of the criminal organization known as the Dark Hunters. The Shadowed One often sends his operatives to kidnap or kill Turaga, in order to destabilize their regions and earn a profit.

Six Turaga sets were released in mid-2001 with the launch of the BIONICLE line, depicting the six Turaga who governed the island of Mata Nui. A lever on the back raised the set's right arm which carried the Turaga's Badge of Office. When the lever was released, a rubber band lowered the arm again. A Turaga Nui could be built using the parts of these six sets.

Four of these Turaga sets (Vakama, Matau, Nokama, and Nuju) were also released in a promotion for the Kabaya candy company. These sets were identical to the non-promotional versions of the sets, although instructions were included for a non-canon combiner model of the four sets.

In mid-2004, the Turaga Dume & Nivawk set was released, including a twenty-two piece Turaga Dume figure. Turaga Dume's noble Kanohi Kiril was included in a blend of black and bright red plastic.