"Tahu heard a soft whistle, as if something was falling nearby, followed by a harsh click. He had come to hate that noise. It was the sound of a Tridax pod opening up to unleash its cargo of shadow leeches."
— Narrator, The Final Battle

Tridax Pods are sphere-shaped containers that can hold a maximum of four Shadow Leeches at a time. These containers were used by at least five Makuta, who were able to eject the Pods from their chests to release the contained Shadow Leeches, as a means of attack primarily against Av-Matoran. The pods were created by Makuta Mutran and Makuta Tridax.[1][2]

The Tridax Pods that the Phantoka Makuta carried were destroyed during the Energy Storms.

The set version of a Tridax Pod 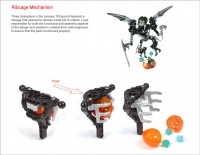 A Tridax Pod was included in each of the Phantoka Makuta sets, holding the set's four Shadow Leeches. It was comprised of two transparent orange hard plastic pieces which clipped together to form a hollow sphere. It could be dropped by pushing on the back of the silver rib piece of the Makuta sets. When the pod hit the ground, the pieces would split apart, releasing the Shadow Leeches. The Tridax Pod was also included in the Spiriah combiner set; however, Spiriah never had one in-story.