"Tahu, Toa of Fire. Onua, Toa of Earth. Gali, Toa of Water. Lewa, Toa of Air. Pohatu, Toa of Stone. And Kopaka, Toa of Ice. Great warriors with great power, drawn from the very elements themselves. Together, they were six heroes with one destiny: to defeat Makuta and save Mata Nui."
— Narrator, Tale of the Toa

The Toa Mata were the Toa destined to awaken Mata Nui. The Toa were later transformed into the Toa Nuva by Energized Protodermis.

The Toa Mata in stasis inside their canisters

Created as the first Toa team[1] on the island of Artakha[2] around 100,000 years ago, the Toa Mata were first awakened by the Order of Mata Nui[3] on their base known as Daxia.[2] They were told their names and of their identity as Toa. Following this, they were trained there in combat by Hydraxon. They were then sent to Karda Nui, where they defended the Av-Matoran at work there. While there, they had to contain energy spikes which were affecting the Rahi, and they had to defeat the sentient lightning bolts known as the Avohkah. After the Matoran left the core, the Mata entered the Codrex. Inside, they entered their Toa Canisters awaiting the day they would be needed.

During the Great Cataclysm, the Toa were launched onto the surface of Aqua Magna the moment Mata Nui fell asleep. They were intended to land on the island created by Mata Nui as camouflage, but their canisters malfunctioned, and they drifted aimlessly in Aqua Magna for a thousand years. The drifting ended after the Av-Matoran Takua accidentally activated a failsafe mechanism by gathering the six Toa Stones placed by the Toa Metru a millennium beforehand. The thousand years had taken a toll upon the Toa Mata, however. Their organic tissue had decayed over the years, and they had to rebuild themselves once they had arrived on the island. The long hibernation had also left them with amnesia, forcing them to rely on external information while their memories slowly coalesced.

The Island of Mata Nui

Upon arriving on the island, the Toa Mata quickly met their respective Turaga - the former Toa Metru - and learned of the menace of Teridax and their mission. Each Toa had to gather six Great Kanohi - a Kakama, Hau, Pakari, Akaku, Kaukau, and Miru - before they could hope to face Teridax. Soon afterwards, the Toa met each other, though they did not remember each other. The Toa of Fire, Tahu, soon emerged as team leader.

The Toa also gathered thirty-six Noble Kanohi which they utilised during their quest.[MNOG] These masks were returned to their respective villages.[4]

After failing to recover all of their own masks individually, the Toa were forced to put aside their differences in order to more effectively collect them all. Taking advantage of their meeting, Teridax attacked them. Successfully banding together, the Toa defeated Teridax's obstacles, and continued their quest. Dividing into teams, the Toa set out, and eventually claimed their remaining masks. The Toa traveled to Kini-Nui, where they exchanged their recently collected masks for Golden Kanohi. Briefly conversing with the Chronicler's Company in order to secure the entrance to Kini-Nui, the Toa descended into the darkness of the Mangaia. The Toa, in order to defeat the many challenges of Teridax, merged their minds and bodies and formed Toa Kaita. Their newfound strength carried them through the Manas lair, and into the antechamber of Teridax, where he defused their forms, separating them into the six Toa again.

The Toa Mata were then forced to confront the Shadow Toa, physical manifestations of their own darkness. After realizing that the Shadow Toa were representative of their own darkness, the Toa Mata absorbed them, and continued on to Teridax's chamber. Teridax approached them in the form of a Matoran, in an attempt to disillusion them about their ideals and goals. The Toa refused to fall for his ploy, prompting the Makuta to unleash his power at them, Shapeshifting into the form of a vortex. Using their Elemental Powers, the Toa succeeded in defeating Teridax, driving him back into his lair.

Emerging from Kini-Nui, victorious from their battle, the Toa Mata were approached by a Ta-Matoran, who was in a state of shock, and could only repeat a single word: Bohrok. The Toa traveled to Ta-Koro in order to face this new threat. After successfully driving two of the swarms off, the Toa were recounted the legend of the Bohrok by Turaga Vakama, who informed them of a new quest they were destined to take. The Toa set off in their separate directions, in order to collect the eight necessary Krana which would help them defeat the swarms. Lewa, traveling to Le-Koro, found it already under control of the Krana, and was subjugated into the swarms. He was later freed by Onua when Le-Koro was liberated. The Toa spent the next several weeks fighting off the Bohrok swarms, slowly discovering more and more about the creatures, and collecting Krana whenever they could.

The Toa Mata battling the Bahrag in Exo-Toa

Eventually, the Toa traveled to the Bohrok Nest, and surpassed several obstacles set up by the Bahrag, leaders of the swarms. Before they reached the nest, the Toa discovered six Exo-Toa suits, which they used in an attempt to defeat the Bahrag. However, the Toa found that the Bahrag twins' symbiotic powers were able to protect them from the Electro-Rockets at close range. After realizing that the suits also hindered their elemental abilities, the Toa shed them, and used their elemental powers in a single blast to trap the Bahrag in a Protodermis Cage. Their defeat of the Bahrag triggered a release mechanism in the floor, dropping the Toa into tubes of Energized Protodermis. Destined to transform, the Toa Mata emerged as the more powerful Toa Nuva.

The Kanohi Ignika later devolved Tahu back into his Mata form in order for him to be able to wield the Golden Armor.

In an alternate universe, the Toa Mata were still placed inside canisters in case of something going wrong with Mata Nui. Tuyet learned their location from Artakha, and sent a team of Toa to retrieve them, but none of the Toa survived. Tuyet then discovered a secret chamber in the Coliseum where she was able to fake the signal to launch the canisters. She then convinced the Toa Mata that the Brotherhood of Makuta and Dark Hunters were major threats and had to be eliminated, so they all joined her in an attempt to create peace. However, Pohatu eventually grew concerned with her methods and created a secret rebel group with Lesovikk. When the resistance attacked the empire, Tahu, Kopaka, Lewa, and Gali were killed in the battle, while Onua and Pohatu fought each other.

The Toa Mata were a typical Toa Team, comprised of six members of each primary element. Though they often disagreed on how to approach missions, they were very effective as a team, even after losing their memory.

The six Toa Mata were released in 2001, among the first BIONICLE sets released. Each one featured a gear system within their torso that allowed them to swing their arms (save Pohatu, who had a similar function with his legs).

Tahu was re-released in a different form in 2010 as part of the Stars line.

"Makuta believed these Toa were weak pretenders, easily conquered. He saw nothing to fear in them. So many years in darkness must have made Makuta blind."
— The Turaga of Mata Nui, Deep into Darkness 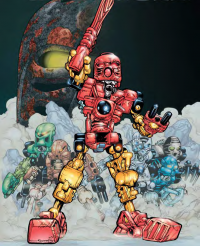 The Toa Mata in comic form