This article is about the Toa Team. You may be looking for the volcano or one of Teridax's lairs.

"You and I have been friends for thousands of years. We've traveled together, fought together, and once almost died together."
— Lhikan to Tuyet, The Many Deaths of Toa Tuyet

The Toa Mangai were a group of Toa led by Toa Lhikan that protected Metru Nui from danger.

The Toa Mangai were first assembled when Turaga Dume was threatened by the Dark Hunters, who wanted to build a base in Metru Nui. These eleven Toa came from many different islands, and while some had been members of Lhikan's team in the past, the rest were summoned by Lhikan to answer Dume's call and fight against the Kanohi Dragon, which the Dark Hunters had unleashed on Metru Nui.[4][5][6] After a month-long battle which destroyed half of Ta-Metru, four Toa of Ice members of the Mangai managed to freeze the Kanohi Dragon, rendering it comatose. The dragon was later shipped to the island of Xia, where it remained until its battle with the Tahtorak beast. Despite being given the option to return to their homelands, the recruited Toa remained to protect Metru Nui.

At some point in time, while all but three of the Toa Mangai were away on missions, Dark Hunters slipped into Metru Nui searching for a fabled artifact, the Nui Stone.[7] One of the Toa, a Toa of Water named Tuyet, learned of the Hunters' entrance into Metru Nui and discovered that they were after the stone - which she possessed. Unwilling to relinquish the stone, she murdered a Ta-Matoran, and placed a tablet with her own name on his corpse. When confronted by Lhikan and Nidhiki, she denied any knowledge of the incident, and left the other two to continue their investigation. Later, she killed yet another Matoran, a Le-Matoran, and once again placed the signature tablet on the corpse. Confronted again by Lhikan, Tuyet revealed the existence of the stone, though she denied possession of it. She informed Lhikan that the Dark Hunters were searching for the stone, and told him that the deaths of the Matoran were a sort of countdown meant to throw Lhikan off of the Hunter's scent. Lhikan and Nidhiki later confronted these Hunters, although they themselves seemed to have no knowledge of any of the Matoran murders. However, Tuyet, being unaware of the Hunter's defeat, murdered a Ga-Matoran to continue her ruse. Lhikan and Nidhiki soon realized that Tuyet must have been behind the murders and confronted her in her home. Cornered, Tuyet desperately tapped into the power of the Nui Stone in an attempt to kill the duo, but she was ultimately defeated and locked in the Coliseum dungeon. Not long afterward, Botar arrived to transfer Tuyet to another dimension.[8][9]

After being denied a base in Metru Nui, the Shadowed One launched several operations in an attempt to gain control of the city. When all failed, he ordered a full scale invasion of the island. While the Toa Mangai attempted to defeat the enemies, they were quickly outnumbered, and the Dark Hunters neared victory. However, Toa Naho was able to sneak past the Dark Hunter lines and off of Metru Nui, and quickly gathered more than one hundred different Toa from other lands. During the war, Lariska approached Nidhiki, asking him to betray the Toa. Nidhiki accepted and later led the Toa into an ambush in the Canyon of Unending Whispers as instructed by Lariska. Meanwhile, over two hundred more Toa were arriving to assist the Toa already on Metru Nui to defeat the Dark Hunters.

When over 300 Toa under Lhikan's command appeared in a counter-ambush, due to Lhikan having discovered Nidhiki's defection, Nidhiki and the Dark Hunters found themselves outnumbered. Lhikan, in hopes of recovering the Makoki Stone as promised by Hakann, let the Dark Hunters live, under the condition that they would take Nidhiki with them. Reluctantly, Nidhiki left with them and worked for them, training recruits into the Dark Hunters. After the war, several Toa left the city for other islands, in order to have new adventures of their own.[10]

After many years of peace on Metru Nui, Turaga Dume was silently captured, and the leader of the Brotherhood of Makuta, Teridax, impersonated him. The false Dume sent the remaining Toa Mangai on various missions, supposedly for the city's safety. However, none of them returned, having been killed by Dark Hunters Teridax had hired: Eliminator, Krekka and the now-mutated Nidhiki. For one mission, Makuta sent two Toa and the Chronicler Kodan to seal one of Metru Nui's Sea Gates, only to have them killed by Eliminator upon the mission's completion. Due to the nature of Eliminator's attacks, the Toa Mangai and Kodan were not revived in the Red Star.[1] 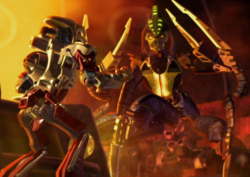 Eventually, only Lhikan remained. Realizing the graveness of the situation, he stole the Toa Stones from the Great Temple and brought about six new Toa, the Toa Metru. Shortly afterward, however, he was captured by Nidhiki and Krekka, and later transformed into a Turaga. Nidhiki, after failing to capture the new Toa Metru, was absorbed by Teridax along with Krekka, expanding the Makuta's power and allowing him to assume a new, more powerful form. Lhikan was rescued by the Toa Metru, but eventually killed by Teridax while saving Vakama's life, leaving behind the legacy of the Toa Mangai. Various memoirs of the Toa Mangai were eventually placed inside the Coliseum for safekeeping.

Lhikan was later sent to the Red Star to be resurrected, but was trapped within it due to the star's damaged teleportation system.

Over a thousand years later, when Teridax's Plan had finally been completed, Macku found Tuyet in an unsafe area of the Archives with a shard of the Nui Stone, claiming that she was a perfect ally for the rebellion, as she had been believed dead for so long. Still harboring intentions of enforcing her own justice, Tuyet traveled with the Matoran through the Archives, encountering Tren Krom in the body of Lewa Nuva. They eventually broke into the Core Processor, and were drawn into a fight between Helryx, Miserix, Axonn, and Brutaka. The whole group of combatants, as well as the Matoran, were then teleported into outer space by Teridax and barred reentry into the Matoran Universe. However, Vezon appeared and transported them to Bota Magna.

Of the eleven Toa, only four are known by name.