"Half-Toa, half-beast, prisoners of your own instincts, your own rage ... until the day your Rahi nature takes hold completely, and you are no better than gibbering things bringing destruction wherever you roam."
— Rahaga Norik, Web of the Visorak

Toa Hordika was the name given to the Toa Metru by Norik when they were transformed by the effects of the Hordika Venom. They were bestial, half-Toa half-Rahi creatures, retaining their higher mental processes, but plagued with animalistic impulses.

Returning from their search for a new home for the Matoran of Metru Nui after the Great Cataclysm, the Toa Metru arrived in Metru Nui with plans to move the Matoran to Mata Nui to start new life. However, once they returned, they discovered that their city had been devastated by the Great Cataclysm, and was overrun with the Visorak hordes. The Onu-Metru Archives had been destroyed, and various types of Rahi, many of them dangerous, had escaped and now rampaged through the city. As the Toa headed for the Coliseum to rescue the Matoran, they were constantly harried by the Visorak and mutations of Rahi, such as an entity made of sound. A pack of Visorak Keelerak managed to ambush them and paralyzed them with their Rhotuka spinners.

The Toa Hordika falling from their cocoons

The Toa found themselves suspended on Visorak webbing, and wrapped in cocoons of the same material. After a small amount of time, the Hordika Venom in the cocoons began to take effect, and changed them into new forms. Their violent mutation damaged the cocoons, and they eventually broke free, plummeting towards the ground. The Rahaga saved the newly mutated Toa from death, returned them to the ground, and introduced themselves. The Rahaga explained to the Toa what had happened and how it was possible for them to revert back to their previous forms: find Keetongu, the legendary Rahi who could reverse their horrible transformation.

The Toa decided to worry about the Matoran first and, on Matau's suggestion, started searching for parts to build an Airship to transport the Matoran. Each of the Hordika was partnered with a Rahaga, though most of the Toa felt uneasy and annoyed with their new companions. During the travels, the Rahaga attempted to teach the Toa how to control the fits of rage that came with being Hordika, as well as disciplining them in the use of their new powers and tools.

During their search, the Toa discovered demoralizing evidence that they were not destined to be Toa, and that Toa Lhikan should not have chosen them. Instead, Makuta Teridax had influenced the former guardian of Metru Nui in his decision. 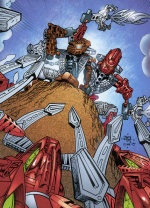 The Toa Hordika fighting the Visorak

During their mission, Whenua and Bomonga were captured. In order to free them, the other Toa, along with the Rahaga, Krahka, who had allied with them in order to defeat Roodaka, and the Tahtorak, stormed a Visorak outpost and fought against the hundreds of Visorak led by Sidorak, king of the Visorak. The gargantuan Zivon was released from the Field of Shadows, and joined the fight. During the battle, the Tahtorak and Krahka were locked in the Field of Shadows with the Zivon. The Toa eventually emerged victorious, and trapped the Visorak in the Tower. The Toa claimed the tower as their own, and used their powers to charge its gate with elemental energy.

After the Toa successfully assembled the Airships, the Rahaga tasked them with acquiring the Makoki Stone. The Toa searched all over Metru Nui, defeating various Visorak and Rahi in order to collect the parts of the stone. After retrieving the six stones, the Toa managed to successfully find and hide the Kanohi Avohkii in a stone encasement created by one of Onewa's Rhotuka.

Toa Vakama, who had wandered away from the others to think, was captured by the Visorak and taken to Roodaka. Succumbing to the guilt of failing his teammates, he was lured by Roodaka into joining forces with her. Meanwhile, the other Toa and Rahaga had gone to the Great Temple to find information on Keetongu. Attacking the Great Temple, Vakama was successful in the capture of five of the six Rahaga, leaving Norik with the remaining Toa to pass on the message. The Toa and Norik then traveled to Ko-Metru in search of Keetongu, while Vakama's success earned him a position as commander of the Visorak horde..

Having discovered Keetongu in his lair, the Toa pleaded with Keetongu for his help. Keetongu refused, saying the Toa had not yet learned to live with their Hordika sides and were not ready to make the choice to be turned back. However, he did agree to ally with them in their final attempt to defeat the Visorak.

The Battle of Metru Nui

At the Coliseum, Vakama and his army awaited the arrival of the Toa and Rahaga. Once they arrived, a fierce battle ensued between four of the Toa and the Visorak, while Norik went to save the other Rahaga, who then joined the battle. Matau went to the top of the Coliseum, in order to persuade Vakama to rejoin the Toa. The two fought, and Matau eventually convinced Vakama to regain faith, and to remember their mission at hand.

Five of the Toa Hordika entering the Great Temple

Roodaka, having orchestrated the death of Sidorak by Keetongu, arrived and halted the battle to demand that the Toa give her their elemental powers. Vakama (who was pretending to still be allied with the Visorak) and Matau returned to the scene. All of the Hordika, except Vakama, fired their Rhotuka at Roodaka, who then laughed and told them that they were nothing without unity, and that Vakama still belonged to her.

At that moment, Vakama spoke up, told her that he had relinquished his partnership with her, and set the Visorak horde free. He then fired his Fire Rhotuka at her. However, Roodaka had a piece of the Protodermis Cage that Teridax was encased in, and with the combined blasts of the Toa, the Makuta was freed.

Keetongu, deciding that the Toa were worthy of transformation, restored the Hordika to their original forms, and the Toa Metru proceeded to carry the Matoran to Mata Nui with the Airships.

During their transformation, the Toa Hordika retained their intelligence, but were also plagued by animalistic impulses, becoming short-tempered and impatient.

As a result of the transformation, the Toa Hordika were unable to access their Kanohi, which had merged into their faces. Their Elemental Powers were also severely limited, and they were only able to channel it into a Rhotuka. They were also incapable of forming kaita.[2]

The Toa Hordika in set form

The Toa Hordika were released as sets in early 2005 in the United States and in late 2005 elsewhere. Each contained forty-eight pieces including two silver Rhotuka spinners. One of the Rhotuka spinners featured a code in the Matoran Alphabet which, when combined with a three-character prefix from the set's canister, could be entered in the Kanoka Club on BIONICLE.com.