"I went down a spiral once: a big stone tunnel that went down and down and down, and ended in Zyglak. Whoever built it had no decorating sense at all."
— Vezon, Destiny War

Template:OtherLocation The Cord was a stone cord leading from and connecting Voya Nui to Mahri Nui. Inside The Cord was a network of narrow, spiraling tunnels. 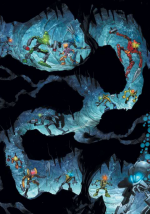 The Toa Inika traveled through here to reach Mahri Nui in search of the Kanohi Ignika, and fought the Zyglak that lived there. During the battle, the Zyglak took advantage of The Cord's spiral nature to disappear and reappear and spontaneously attack the Toa.