Tamaru is an enthusiastic Le-Matoran native to Metru Nui.

On Metru Nui, Tamaru dreamed of becoming an Airship pilot but washed out of training because of his fear of heights. He later opened Tamaru's Transports, renting and selling used vehicles and failed test-track prototypes. Around the time of the Great Cataclysm, he was captured by Vahki under the command of Makuta Teridax disguised as Turaga Dume. Tamaru was then placed into a Matoran Sphere in the Coliseum and entered stasis, but he was later spirited away from the city by the Toa Metru during the Great Rescue.

Tamaru was awakened by the Toa Metru on the shores of Naho Bay on the island of Mata Nui. Although his memory had been erased and his size and power decreased by the effects of the Matoran Sphere, Tamaru aided in the construction of Le-Koro using parts from the Airships the Toa Metru had used to transport the Matoran to the island. After a year of peace, Makuta Teridax's infected Rahi began to attack the villages. He tried out for the Gukko riders, but washed out due to his vertigo, just like on Metru Nui.

After many years of attacks, the Nui-Rama mounted a major offensive. Coming from their nest, the Nui-Rama and Nui-Kopen all flew to Le-Koro, where they attacked all the Matoran. The Matoran bravely fought back, but were defeated. Many of the Le-Matoran and Turaga Matau were captured. With only a handful of Matoran left in the village, they were extremely cautious. Soon after the attack, Takua arrived in the village, searching for the Le-Matoran. The Le-Matoran hid at his approach, fearing another Rama attack, but when Takua found and played a flute they realized that it was a Matoran and not a Rahi that had entered their village, so they emerged to greet and inform him of what had happened.

While the Matoran talked, Tamaru noticed Nui-Rama flying out from their hive, far off on the horizon. The Le-Matoran then mobilized a force, and they flew out on Gukko birds to battle the Nui-Rama and recover their friends; while they prepared, Tamaru was seen trying to mount a Kewa, and repeatedly falling off. Armed with disks, the Matoran fought, while Kongu and Takua, Kongu's second, made it into the hive. While Tamaru stayed back at the village, he was soon joined by the freed Matoran and Turaga, along with Toa Onua and Lewa. The Le-Matoran threw a celebration. While the other Le-Matoran rejoiced, Tamaru sat away from the party.

Later on, when Matau received word of a Rahi attack by Teridax via Takua, in a note written by Nuju, Matau prepared the villagers to fight back. Tamaru, however, was sent to the forest ground, to guard the village against Rahi attacks by land; this was Matau's kind way of getting Tamaru out of the way, as he would not be useful due to his fear of heights. Later, when Takua came around all the villages in search of Matoran to join his company, Tamaru immediately joined, believing that no land Rahi would attack or be a threat to Le-Koro.

After the Company was assembled, they journeyed to the Kini-Nui. Along the way, Tamaru revealed to Takua and the others that, unlike most Le-Matoran, he did not have a fear of the water and could swim. Later on, when the group encountered a ravine, Tamaru helped the group cross it. When the group made it to the Kini-Nui, they defended the temple against several Rahi. When hundreds of Rahi began to attack, Tamaru held fast and did not flee. When the company received help from all the villages, they were able to defeat the Rahi, and Tamaru took some time out to speak with Kongu.

Later on in the course of the Bohrok Invasion, when the Bohrok swarms struck, Tamaru and Kongu were the only Le-Matoran not infected by the Krana. After Nuparu invented the Boxor, he and Takua journeyed to Le-Wahi, where they spoke to Tamaru and Kongu. Together, the Matoran formed a plan. The next day, the two Matoran lured Nuhvok away from the jungle, and taunted them into following them towards a clearing. When the Nuhvok arrived there, Matoran in Boxors struck the Nuhvok, defeating them and freeing the Le-Matoran from the influence of the Krana.

Tamaru also played witness to the attacks of the Bohrok-Kal and the Rahkshi, between which he was rebuilt into a more able form, similar to the one he had had previous to being shrunk by a Matoran pod.

After Metru Nui was rediscovered, Tamaru helped to build Boats which the Matoran traveled in to reach Metru Nui.

After arriving on the island, Tamaru helped repair Le-Metru and the rest of the island. He temporarily stopped his work of reconstruction on order of Jaller, to force the Turaga to reveal where the Toa Nuva had gone, but he eventually got back to work. He continued working on the island, after the Staff of Artakha repaired all the destruction on Metru Nui.

After Teridax, who had taken over the Matoran Universe, was defeated by Mata Nui, Tamaru and Macku went to the Archives to help the Onu-Matoran, digging out Taipu. Taipu agreed to help the quake survivors, and announced that the Chronicler's Company was together again.

After Teridax's death, the universe was liberated and Tamaru relocated to Spherus Magna to continue his life[2]. 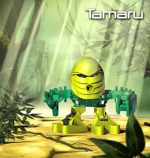 Tamaru's appearance after his size was decreased by a Matoran Sphere

Tamaru is cheerful and boisterous, but he sometimes talks so fast that even his fellow Le-Matoran can have a hard time understanding him. Tamaru is a somewhat clumsy Matoran, but he is eager to help. His greatest dream is to fly, but unlike most Le-Matoran, he is afraid of heights. According to what he told Takua when he and the rest of the Chronicler's Company were traveling to Kini-Nui, Tamaru can swim, unlike other Le-Matoran, who dislike water.

"Highbranch home locked and protected. Downtree guard am I, set here because... I fly not."
— Tamaru, Mata Nui Online Game

"With such Company, Makuta-Beasts have much to fear!"
— Tamaru, Mata Nui Online Game