"It's a predator from one of the lands south of Metru Nui. Down there, oh, there were whole packs of them filling the plains. Once they had eaten everything they chose to on one island, they would walk across the sea and start someplace else."
— Kualus, Challenge of the Hordika

The Tahtorak are immense and powerful Rahi with significant intelligence. 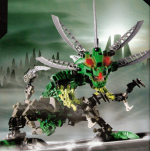 The Tahtorak species was created by Makuta Miserix using Viruses and Liquid Protodermis to be one of the Rahi to inhabit the Matoran Universe.[1]

An Order of Mata Nui member was told by a dying Tahtorak that its kind have had enough of the Skakdi's warring and destroying of Zakaz, and plan to wipe them out. However, these plans remain unfulfilled due to the Skakdi's recent participation in the war between the Order of Mata Nui and the Brotherhood of Makuta.

After the Great Spirit Robot was critically damaged in the Battle of Bara Magna, the surviving Tahtorak left the Matoran Universe and immigrated to Spherus Magna.

The Tahtorak throwing a piece of rubble at Matau

A Tahtorak was dropped onto Metru Nui by Brutaka via his Kanohi Olmak for fun. It went on a rampage in Ga-Metru before being brought down and locked in the Archives. It somehow became buried deep in the Fikou Web, where it lay asleep until it was accidentally awakened by a number of Lava Eels the Toa Metru agitated during their conflict with Krahka.

Soon afterwards, it tore its way to the surface of Ta-Metru, where it proceeded to lay waste to the city, all the while asking for an "answer" to a question no one could understand (although Rahaga Pouks theorized that it asked how it came to Metru Nui, so far away from its home). Vakama, Nokama, and Matau defeated the Tahtorak by using Kanoka disks to weaken the ground under it until it fell through.

When the Visorak overtook the city, Toa Hordika Onewa and Rahaga Pouks allied with Krahka against Roodaka. Krahka led them to Ta-Metru and descended into the hole through which the Tahtorak had fallen. She managed to get it to ally itself with her, the Toa Hordika, and the Rahaga by telling it that the Visorak had the answer to its question. The Tahtorak and Krahka fought a brave battle against the Zivon, which resulted in Krahka, the Zivon, and the Tahtorak being thrown into the Field of Shadows.

1,000 years later, the Tahtorak and Krahka traveled throughout the Field of Shadows again, only to find themselves exiting through a vortex created by Brutaka inside the Piraka Stronghold. Krahka shapeshifted into a flying Rahi and flew away from Voya Nui, but the Tahtorak remained behind.

After the Toa Inika retrieved the Kanohi Ignika and Vezon and the Kardas Dragon were separated, Tahtorak ran into Kardas, and they began to battle one another, a conflict which the Tahtorak won. Annoyed, Kardas fled the island.

Axonn knew the Tahtorak would be a threat to all who lived on Voya Nui, so he summoned Botar to transport the Tahtorak elsewhere. Simply for fun, Botar teleported him into the very center of Xia. The Tahtorak went on a rampage, and fought the Kanohi Dragon, until the Toa Hagah intervened to save the city. The Tahtorak was brought down by Bomonga, using his Mask of Growth, and Pouks then used Stone bonds to contain the Rahi.

When the Great Spirit Robot was destroyed, this Tahtorak left the Matoran Universe and immigrated to Spherus Magna.[2]

Tahtorak rely on their brute strength and their thick hide for offense and defense, but a Tahtorak's hide is vulnerable to the Zivon's stinger. A swipe of a Tahtorak's tail can knock over many buildings at once.

"The answer! Tell me the answer!"
— The Tahtorak of Metru Nui, Dreams of Darkness

"What is he talking about?"
"I don't know. That is all he would say when I found him down below. So I told him the Visorak have the answer, and they don't want him to know it."
— Rahaga Pouks and Krahka, Challenge of the Hordika

The Tahtorak's back as photographed by creator Justin Lamb