"Now the Tahnok have come to the domain of Pohatu… turning mountain ranges to molten magma. They move swiftly, certain that nothing can stop them. For nothing ever has."
— Narrator, To Trap a Tahnok 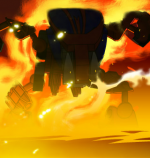 Tahnok are created when Av-Matoran accomplish their destiny and transform into mechanical insectoids. They are then sent to Bohrok Nests to await the signal to cleanse the island camouflage of the Great Spirit Mata Nui. They are aided by the Bohrok Va Tahnok Va.

The Tahnok swarms beneath the island of Mata Nui were awakened by Makuta Teridax, upon his defeat by the Toa Mata. A swarm headed for Po-Koro to lay waste to it. While Toa Gali was able to thin the numbers of one section of the swarm in Le-Wahi, others reached the village and forced the Po-Matoran to evacuate. During the fray, the Matoran Hafu knocked over his own statues on the Path of Prophecies in order to prevent the Tahnok from entering the village. However, this left no room for him to retreat back into the Koro. A Tahnok launched its Krana Xa at him, but he was suddenly rescued by Pohatu, who used his Golden Kanohi to catapult them back into Po-Koro. Afterwards, the Matoran were evacuated and Pohatu, Gali, and Onua drove the menacing Bohrok away.

At a different point, Gali and Pohatu worked together with Onua and Kopaka in a attempt to trap some of the Tahnok in Tiro Canyon. Onua dug a hole from the canyon wall to the sea and Kopaka sealed it with ice. As the Tahnok arrived, Pohatu kicked a boulder, shattering the ice and flooding the canyon with water. While the Tahnok were trapped, Gali swam down into the canyon, collecting the Bohrok's Krana, and barely dodging a boulder the Tahnok melted off the canyon wall. The Tahnok, however, boiled the water and melted handholds in the canyon walls for the swarm to escape. Kopaka also encountered a swarm of Tahnok in Ko-Wahi, which, along with a squad of Lehvak, led him to the entrance of the Bohrok Nest. Several Tahnok were also frozen in the Drifts of Ko-Wahi, and therefore were unable to return to their nests. These Tahnok were later discovered by Takua and Jaller.

After the Bahrag were defeated and imprisoned by the Toa Mata, a Tahnok swarm in the Bohrok Nests went out of control with the guidance of the Bahrag. Onua shared his Pakari Nuva with Tahu, Lewa, and the other Toa Nuva to create a ditch to hold the Tahnok. Kopaka froze the top of the ditch to contain the Tahnok. Matoran used the Tahnok to help with the re-building of Po-Koro. Later, after the Bohrok-Kal were awakened to release the Bahrag, Tahu Nuva attempted to use a swarm of Tahnok to attack Nuhvok-Kal, but failed. Nuhvok-Kal used its power over Gravity to make the Bohrok fly into deep space and fall into orbit. The blasts of gravity power from Mata Nui and Makuta in the Battle of Bara Magna, as well as the movement of Aqua Magna accelerated the process of orbital decay and they were eventually destroyed.[2]

When the Bahrag were later released by the Toa Nuva as part of the their mission to awaken Mata Nui, the Tahnok swarms awoke and contributed to the cleansing of the island of Mata Nui. They have since returned to their nest.

Tahnok are the fastest Bohrok, but despite their quickness, they are still very methodical and understand the value of teamwork. While Bohrok are not naturally aggressive, the Tahnok are the least passive of the swarms. They are provoked easily and if threatened, they will strike first and study the area later. When they strike, they do it as a team, making them all the more dangerous. If one of the members of the team is hurt or in trouble, they will make sure it is safe before they continue their mission. However, they tend to act impulsively and are not as calculating as some of the other breeds.

Along with the other Bohrok types, the Tahnok can roll into a ball for quick transport and can snap their heads forward to deal a blow to their enemies. They can also use this move to launch its Krana onto the face of another being, thereby bringing that being into the swarm's control.

Tahnok use Fire Shields to burn their targets.

8563 Tahnok was released in early 2002. It contained forty pieces, among them a randomly packed blue Krana. By pushing down on the lever on the back of the Tahnok, the gears will cause the Bohrok's head to lunge forward. It is also able to roll up into a ball. An extra piece included in the set allowed one to suspend a rolled-up Tahnok inside its canister by the lid.

Tahnok can be combined with Pahrak and Nuhvok to create a Bohrok Kaita Za. Parts from Tahnok could also be combined with a Lehvak to make a Keras model, using instructions available on LEGO.com in 2002.

There was also a customizable Tahnok-themed pen, P1720 Pen Tahnok, released in 2002.

A large model of Tahnok was shown at the Toys "R" Us at Times Square for a Bohrok event on February 16th, 2002. It was held in a transparent canister-like case and was shown rolled-up and hanging, much as its respective set could be displayed in its own canister. Another large Tahnok model was perched high above the crowd, triumphantly holding a Golden Hau.[3] Unlike most large models of BIONICLE characters, this model was not made of LEGO System Bricks.[4]