BIONICLE was once part of LEGO's TECHNIC line, which had similar functions to early BIONICLE sets.

The TECHNIC line was started by LEGO in 1977 in Europe, called a 'Technical Set'. These sets were similar to normal LEGO sets of the time, but had several places for pins and gears. These pins and gears could work to create realistic technical movement. The next year the line launched in the USA, under the heading 'Expert Builder'. The 'Expert Builder' sets were cars, and cranes, and other assorted vehicles. This year featured the first appearance of the plus-rod piece, available on one side of certain pins. The bulldozer set of 1979 was one of the first LEGO sets ever to include treads, and the next year the automobile sets featured a great advancement in building construction.

1981 featured a huge leap in construction advancement with the introduction of several toothed connector elements. Currently the line was doing pretty well, but the true advancements in TECHNIC construction was still on the horizon. In 1982, the TECHNIC: Universal Building Set line was launched with models that could be several different things. This year featured the plus rod's first appearance, a huge leap in TECHNIC construction. The pneumatic system line was released in TECHNIC in 1983, featuring a pump-based system. The pneumatic sets did have several drawbacks in the way they were constructed.

1986 featured the first play themes regarding TECHNIC, the Arctic Action wave. It featured the first appearance of TECHNIC figures within vehicles in an arctic setting. The first transforming TECHNIC set was the only set of next year, a truck that could transform into a robot. Several new construction types were introduced including an improved chassis. 1989 was the golden year for TECHNIC, including improved pneumatics, nine new fully functional sets, and a huge lift arm. 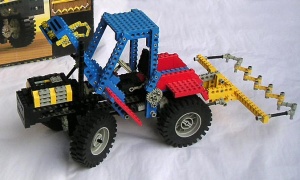 The advancements were just the beginning as in 1990 the 9V motor system was introduced. This system was released in a Universal Building Set and was an advancement in the motorized system that would drive later TECHNIC sets. Another system followed suit the next year, the flex system which featured flexible cables to help stability. 1992 featured the most complicated pneumatic set ever, a huge truck with a complicated set of pneumatic pistons and devices. A pole reverser was a DC electric switch released in 1993 that completed a very complex few years for the TECHNIC line. At the time, though, only adults and teenagers were buying TECHNIC, a problem that LEGO would soon try and fix.

1994 was a huge year for the TECHNIC line with the Super Car set, the pinnacle of TECHNIC design. It had some pieces exclusive to it, and a very detailed body. Overall, the Super Car was one of the best TECHNIC sets ever. The Universal sets reached their pinnacle as well with huge multi-part sets with new pieces to improve suspension. The next year featured the 'Tech Play' and 'Tech Build' lines being introduced, focusing on either play value of the building experience. There was a Control Center set with helicopters and a T-Rex, all controlled by an electronic motor.

More and more smaller TECHNIC sets were released, focusing more on play value and that aspect. The Space Shuttle set was a huge design leap with a 9V motor system and fiber-optic connectors. The fiber-optic connectors were a huge leap for LEGO. 1997 featured several transforming sets, such as a submarine to a robot. The 9V motor system was now widespread, and TECHNIC sets focused on build or play value. 1998 was an explosion for TECHNIC sets with all new ranges of sets. The TECHNIC mini-figures returned in battle vehicles, and then there were several smaller TECHNIC sets that still had the advancements of the first. TECHNIC was moving into a new age. 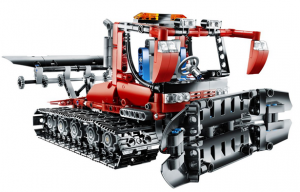 LEGO was in deep trouble, and looked at its TECHNIC line and decided to make it cater to little kids again. The Slizers/Throwbots line was launched, called Slizers in Europe and Throwbots in America. The Slizers were Technic action figures, and had a story behind them. With eight central characters, Torch, Ski, Turbo, Scuba, Jet, Amazon, Granite, and Electro the story was pretty basic. The figures were either on their own planets or regions and fighting each other and natural beasts to try and gain power. The next year there was a massive meteor impact, and there were the appearance of four new Slizers, Flare, Spark, Blaster, and Millennium. However, the story stopped there and never continued. Other TECHNIC sets were decreasing in their complexity.

BIONICLE was in motion for a launch under the TECHNIC brand name in 2001. But a filler line was needed, and so the RoboRiders were created. Swamp, Lava, Frost, Onyx, Dust, and Power were six vehicles trying to fight a super RoboRider and a computer virus. RoboRiders flopped however, but did their job paving the way for BIONICLE. Meanwhile the core line of TECHNIC figures continued to be just small little sets, losing the complexity of past years. However, this decade would change TECHNIC forever.

In 2001, BIONICLE launched under the TECHNIC line with revolutionary new construction types and builds. Normal TECHNIC sets began to regain complexity, but they were different. No longer did the beams with axle holes have LEGO studs, they were now smooth. The new TECHNIC line had begun with smoothed out beams and pieces. In 2002, BIONICLE left TECHNIC and became a full-fledged line, though it continued to use TECHNIC elements in larger sets such as the Bahrag. That year, TECHNIC was reduced to only three sets, perhaps to focus on BIONICLE over TECHNIC. 2003 was all construction equipment going into a key year for TECHNIC. 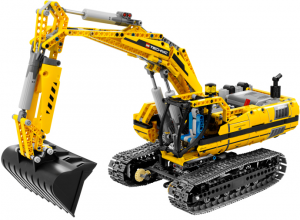 The modern TECHNIC line launched 2004, with a new sleeker look and functions. The next few years featured modern trucks and cranes, with truly complex TECHNIC sets. While the TECHNIC construction spread into other themes such as LEGO RACERS, TECHNIC became the complex function based line it started out as. Now with a whole host of TECHNIC vehicles, and improved functions, TECHNIC had entered its modern age. In 2010, TECHNIC continues to be a functional vehicular line with new sets including tractors, trains, and compact loaders.

To make TECHNIC a child-friendly line, LEGO made lines of sets that had special functions, and some of these lines had a story behind them. 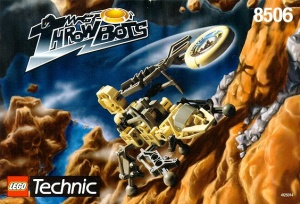