Suukorak are a breed of the spider-like Rahi Visorak.

Suukorak, like all the other Visorak, were created by the Makuta Chirox on an island south of Nynrah that was soon renamed Visorak, after the spider-like creatures.

Sometime after their creation, Gorast made the Visorak part of the Brotherhood of Makuta's armies, and they were led by Sidorak and Roodaka who were king and viceroy of the Visorak hordes. The hordes captured a number of islands, mutating native Rahi beasts in the process.

During the Toa Hagah's Raid on the Destral Fortress, Norik and Iruini captured a Suukorak and forced it to guide them to the encampment where the other Toa Hagah had been mutated into Rahaga and were being held.

Shortly after the Great Cataclysm, the Suukorak, along with the other Visorak species, invaded the wrecked city of Metru Nui, summoned by Makuta Teridax. When the Toa Metru returned to Metru Nui, the first Visorak they encountered were the Suukorak. The Visorak attacked the Toa while they were in the Moto-Hub. Nokama and Onewa were the first to encounter them. When the rest of the Toa arrived, the Suukorak withdrew. Rahaga Iruini then led the Visorak on a futile chase through the Archives. The Toa Metru were soon captured and mutated into Toa Hordika. Later, when Nuju and Kualus were cutting off sections of Chutes to use for their Airships, they were ambushed by Suukorak, but managed to fight them off.

Suukorak fought in a battle for a tower which the Visorak inhabited. Many Suukorak were killed in the battle, which the Toa and Rahaga won. When the Toa were searching for the dissembled Makoki Stone, Onewa was trapped by a Suukorak. Whenua saved Onewa by trapping the Suukorak with an earthquake. Later, Nokama had to force her way through some Suukorak after she found her Makoki Stone. Soon after, another Suukorak tried to attack Nokama and Nuju, but the latter trapped the Visorak in a block of ice. They also ambushed the Toa Hordika in the Great Temple after the Toa uncovered the Avohkii. Later, the Suukorak took part in the Battle for Metru Nui under Vakama who had changed sides. After Vakama disbanded the horde, most Suukorak left Metru Nui for good.

A Suukorak in Web of Shadows

Responding to the summons of the Heart of the Visorak, which was placed on the island of Artidax by three of the Toa Mahri, all the Suukorak and other Visorak followed it there. Shortly afterwards, a volcanic eruption rigged by the Order of Mata Nui took place on the island. Because of the Heart, the Visorak were unable to leave. As a result, all the Suukorak and the other Visorak species were killed, though Teridax recreated them after taking control of the Matoran Universe. Subsequently, they served in his armies. When Teridax was killed, they along with the rest of the Visorak Horde became a wild species that emigrated to Spherus Magna. 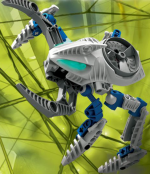 Suukorak have a Rhotuka Launcher that fire Rhotuka with the ability to create a field of electrical energy around a target that slowly shrinks – while the field is in effect, the target cannot escape it, as the field moves with the target. Their Rhotuka also has the standard paralyzing spinner power for immobilizing foes and prey possessed by all Visorak. Suukorak are natural tacticians, masters at knowing when to attack and when to withdraw. Suukorak also have the ability to slow their life processes down to almost nothing, appearing dead and making it extremely difficult for others to detect their presence. This assists them in striking from cover, which is their preferred hunting tactic. Suukorak are naturally resistant to cold and they prefer hunting high above the ground, where the air is thin and cold.

Suukorak was released as a canister set in winter of 2004/2005 in Europe, and summer of 2005 in North America. It contained forty-seven pieces, including a Rhotuka and Rhotuka launcher. Pieces from the set could be combined with parts from the Boggarak set to make a Kahgarak, with both Boggarak and Roporak to build a Venom Flyer, and the other five Visorak sets to make the Zivon.

A mini Suukorak piece was released in all four playsets of 2005 which were the Tower of Toa, Battle of Metru Nui, Visorak Battle Ram, and the non-canon Visorak's Gate. The piece featured a blend of glow-in-the-dark and black plastic and mandibles distinct from the other mini Visorak pieces. It could clip to Visorak webbing pieces at a point between its mandibles.

Suukorak in the Visorak Promo Animation