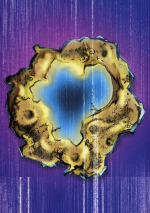 Mata Nui created the Skakdi, and they existed as a relatively peaceful race. A Brotherhood of Makuta member, Spiriah, made his way onto the island about 75,000 years ago under orders, and sought a use in the Skakdi as soldiers. Experiments performed by Spiriah caused the Skakdi to gain Elemental Powers that could only work in combinations, as well as vision powers and other abilities. He then departed the island, leaving Visorak behind to keep guard, planning to return later. With their newfound powers, the Skakdi turned on the spider-like Rahi, and eventually began fighting amongst themselves, causing great damage to Zakaz. When Spiriah returned, he found that his experiment had failed. This incident resulted in his exile and wanted execution by the Brotherhood.

One Skakdi, Nektann, became a warlord of the island at some point.

Arguments between the Skakdi turned into a civil war, which ravaged the island. The warlords of Zakaz stopped the war by taking control of the factions.

One Skakdi was sent to the Pit for committing unpardonable crimes. After the Great Cataclysm, he escaped into the endless ocean of Aqua Magna, and was mutated to be able to breathe water. He was later wounded by the Barraki Pridak and left for sea predators.

Six members of the Skakdi race are known to have been recruited into the Dark Hunters. They later left the Hunters to find the legendary Kanohi Ignika, and began calling themselves Piraka. Their adventures eventually led to their mutation, and they escaped into the Cord. During an attempt to enact revenge on the team of Toa that had thwarted their efforts, they were captured by Order of Mata Nui member Axonn, and held on Daxia.

Many of the Skakdi clashed with Axonn and Brutaka, who had arrived on their island hoping to gain them as allies. They managed to convince Nektann, a Skakdi warlord, to ally with them, and proceeded to convince the other warlords of the island. The Skakdi armies traveled to one of the Matoran Universe's southern islands, where they battled a small army of Rahkshi. While the Rahkshi held the upper hand at first, the Skakdi managed to muster enough sheer rage to decimate their opponents ranks.

Several Skakdi were recruited into Pridak's new army upon his release from the Pit.

After Teridax took control of the universe, Nektann and his legions agreed in allying with him. The Mahri were sent by the Order shortly afterward to investigate whether or not other Skakdi warlords were going follow in Nektann's lead. Infiltrating a base on Zakaz, the five Toa came upon an army of Skakdi who shouted refusal of Teridax's dominance. As a vat of Energized Protodermis arose, the Toa watched as they dropped into the substance a Vortixx, a Zyglak, a being from the species on Stelt and the five missing Piraka. The beings fused and climbed out of the tank.

In an alternate universe, the Skakdi were among the many beings who fled to the island of Mata Nui when Mata Nui died. They made their home mostly in the region formerly known as Po-Wahi. Nektann also became a member of Turaga Takanuva's ruling council.

In this alternate timeline where Mata Nui had completed his mission, the Skakdi species left the Matoran Universe and were enemies of the Agori and the Matoran. Later, they were conscripted into an army led by Makuta Miserix and attacked a village where an alternate Vezon had just arrived.

All Skakdi (excluding Vezon) possess an organic spine that runs from the back of the head, down the arms, and down the back. They also have sharp claws and large teeth which seem to make a sinister smile or scowl. All Skakdi also have Elemental Powers, but can only be accessed by combining them with that of another Skakdi. Their vision powers include abilities such as laser vision, heat vision, and impact vision. A large number of Skakdi have other abilities as well. Most of them are either physically damaged, mentally deranged, or in some other way warped by Spiriah's experiment. Skakdi are very bellicose, and love to join any fight.

Skakdi also have the ability to wear Kanohi, though most lack the mental discipline required to use a Mask of Power.

There are both male and female Skakdi; the females are more vicious and destructive.

Spine Slugs, a parasitic species of Rahi, often live symbiotically on the spines of Skakdi and are rumored to contribute to their aggressive behaviour.