Before leading the Visorak, Sidorak held a position of minor power on Stelt. He kept advancing in the eyes of his leaders by claiming credit for the victories obtained below him; if a commander below him objected to his credit-stealing, Sidorak would simply dispatch him on a dangerous mission from which that commander would not return. He also betrayed his clan leader, Voporak, on the island, who was mutated by the Makuta of Stelt. Later, Sidorak attempted to join the Dark Hunters, but he was defeated by the Dark Hunter codenamed Gladiator during his entry test; his life was spared, but he was denied membership and was later allowed to return to his homeland.

The number of successes attributed to him attracted the attention of the Brotherhood of Makuta, who recruited him into their ranks, and he quickly rose to power. At first, Sidorak was a simple courier between the Brotherhood of Makuta and the island of Xia, and it was during this job that he and Roodaka first met. Eventually, Makuta Teridax, Sidorak's mentor, made Sidorak a lieutenant along with Roodaka, and the two constantly feuded for Teridax's favor. Sidorak also hoped to forge an alliance with Roodaka, which she agreed to later on. Once the Toa Hagah were transformed into Rahaga, after their rebellion, Sidorak took credit for the idea, which had actually been Roodaka's. Teridax, in turn, made him king of the Visorak horde, with Roodaka as his viceroy. Although he led the Visorak to victory on many occasions, Sidorak still was insecure about his position as their leader. The Visorak did not notice this, but Roodaka did. 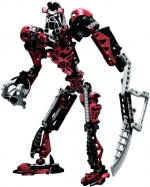 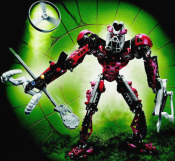 He wielded a Herding Blade on his arm, which could be used to summon Visorak to his side or to fire a powerful beam of energy. However, for effectiveness it required better accuracy than Sidorak's poor aim could provide. Sidorak also possessed a Rhotuka Launcher.