Collectibles are items featured in BIONICLE sets that are part of a larger collection that does not include the figures. Collectibles could be acquired through various means such as supplementary packs, randomly packaged in standard figures, and retail promotions.

From the inception of the BIONICLE line, Kanohi Masks of Power held a central role in both the sets and the storyline. The Toa's quest to find the Masks of Power was a major focus of the story in 2001. To coincide with this "collect the masks" theme, collectible mask packs were released (set numbers 8525 and 8530) in the United States and European markets, respectively. These packs contained two random masks from a series of seventy-two (the Toa Mata's six Kanohi in their six respective colors, and the six Noble Kanohi of the Turaga in their respective six colors), as well as pieces to construct a head with one of six eye colors to display it on. A seventy-third mask, the hand-painted Infected Kanohi Hau, could also be found in those packs.

Featured on packaging was also a silhouette of a then-unknown mask; this was later revealed to be the Kanohi Vahi, planned for release in the 2001 video game BIONICLE: The Legend of Mata Nui. When the game was cancelled, the Vahi was instead used in other promotional giveaways. 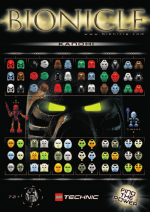 A few other special masks were made available through other promotional events. A transparent neon-green Miru (commonly known by the acronym "TNGM") could be obtained at LEGOLAND California. Copper Masks of Victory in two shapes were also made available. A copper Huna was distributed at Toys 'R Us promotions in the United States, at LEGOLAND Windsor in England, and a Nestle promotion in Germany. Promotions to distribute the copper Huna continued into future years, such as a Blockbuster promotion in 2003. At LEGOLAND Billund, a package containing both a Copper Huna and a Copper Komau could be obtained. Slight coloration differences existed between the US and European versions of the Copper Huna.[citation needed] Finally, a 14-karat solid gold Kanohi Hau and was distributed as a grand prize for various contests, including the Search for the Gold Mask Sweepstakes and the Build Your Own BIONICLE Website contest. This mask had two additional holes on the sides for a chain, and only thirty of these masks were ever reportedly produced.[citation needed]

Fourteen additional masks (the Kanohi Ruru and Kanohi Matatu each in colors of the six Toa and the Kanohi Kaukau in transparent-yellow and light transparent-blue), known collectively as the "European misprints," could infrequently be found in 8530 due to a production error. Two of these masks were made available via other means: the black Ruru was released in 8546 Power Pack (and again in 2003 in 8585 Hafu), and the red Ruru was released with a Bionicle-themed clock in 2002.

The following masks were produced in nonstandard colors (commonly termed "misprints," although they feature no printing). They could rarely be found in 8530 Masks:

The following masks released in 2001 could be obtained via contests, promotions, or similar means:

The following masks could be found in sets released in 2001: 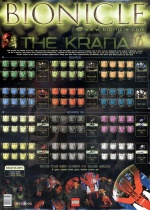 The second year of BIONICLE brought the Bohrok swarms and the Krana. In the storyline, the Krana were the organic brains of the robotic Bohrok, and if a Krana replaced the mask of a Toa or Matoran, it had the power to enslave its wearer. The toy Krana served as a second collectible to complement the Kanohi from the previous year. Krana were slightly smaller than Kanohi masks, and they were made of a rubbery material instead of the typical ABS plastic. The Bohrok and Bohrok Va sets had action features to fling Krana at opponents, and each Krana could be worn by any set that could wear a mask. There were eight distinct Krana shapes and twelve different colors, which formed a set of ninety-six unique Krana. Each Bohrok and Bohrok Va set contained one random Krana with a particular color but unknown shape. Krana were also released in blind packs numbered 8559 and 8569; three random Krana were included in each pack. These Krana packs also introduced gold and silver variants of the Great Masks from 2001, two of which were included in each pack.

The latter half of the year saw the release of the Toa Nuva bearing new masks: the powerful Kanohi Nuva. Another series of thirty-six collectible masks (the six Kanohi Nuva, each in the six colors of the Toa Nuva) was made available via packs numbered 8597 and 8598. These packs contained three random Krana and two random Kanohi Nuva. Additionally, the Toa Nuva sets each bore a signature Kanohi Nuva. One other new mask, an orange Pakari, was introduced in two sets released in 2002.

After its release was postponed in 2001, the Kanohi Vahi, the Great Mask of Time, was made widely available in 2002. This mask could be obtained via various means, such as promotions with retailers Toywiz and Walgreens.

The purple Krana found in 8550 Gahlok Va and the Krana packs was produced in two variations, and a slight color difference can be observed between the two variants.

The following mask released in 2002 could be obtained via contests, promotions, or similar means:

The following collectibles could be found in sets released in 2002:

The first wave of sets released in 2003 featured the Bohrok-Kal and the Krana-Kal. The Krana-Kal were identical in shape and material to the Krana from the previous year. However, they were produced in metallic colors, to complement the silver sheen of the Bohrok-Kal. The eight Krana shapes, each in the six colors of the Bohrok-Kal, formed a new set of forty-eight Krana-Kal. Each Bohrok-Kal set contained a random Krana-Kal in its signature color. Krana-Kal could also be obtained in collectible packs numbered 8599 and 8560, which contained three Krana-Kal and two Kanohi Nuva. Six silver "protodermic" Kanohi Nuva (one for each Toa Nuva) were newly available in these Krana-Kal packs; in the storyline, these represented the color-drained masks of the Toa Nuva when their Nuva Symbols had been stolen by the Bohrok-Kal.

The latter half of 2003 saw the premiere of the Kraata, another new collectible. Kraata were slug-like creatures that controlled the Rahkshi in the storyline and could be stored in the backs of the Rahkshi sets. The Kraata were made of a flexible rubbery material, similar to the Krana, and each Kraata was produced in a two-color blend. The combination of a Kraata's head and tail colors indicated its power; there were forty-two such powers. Six of these powers (Fear, Disintegration Poison Fragmentation, Hunger, and Anger, the powers of the Rahkshi sets) had names, while the other thirty-six powers had no special name. With six stages in forty-two color combinations, a total of 252 Kraata types could be collected. These Kraata could be found in packs numbered 8580, which were small canisters containing three random Kraata and two random stickers from a set of twelve. Additionally, each of the Rahkshi sets included a Kraata of a random stage with that Rahkshi's power.

Seven other Kraata were produced that could not be found in random packs. Shadow Kraata, the powerful seventh stage of Kraata, could be found in specially marked Rahkshi sets at specific retailers in late 2003 [5]. These Shadow Kraata were solid purple in color, and they could be found in the shape of any of the six previous Kraata stages. Two identical transparent neon orange Kraata with no storyline significance were packaged with pairs of Rahkshi-themed shoes, as well. These Kraata were only produced in the Stage 1 shape.

A number of unique Kanohi masks were included exclusively with various sets released in 2003. Of particular note are the Kanohi Avohkii, the Mask of Light, and the Kanohi Kraahkan, the Mask of Shadows. These were the first masks to connect using a Technic axle instead of a Lego stud. A special version of the Kraahkan, commonly called the Movie Edition Kraahkan, was packaged with 10201 Takutanuva.

A red-and-green colored infected version of the Hau Nuva was made available through various promotions in late 2003. The mask could be obtained at giveaways at U.S. Lego retail stores [6], with a German Bionicle magazine [7], and through a Woolworth's promotion for the Mask of Light movie [8]. A collection of the four BIONICLE Chronicles books released in 2004 also included an Infected Hau Nuva. This mask was actually produced in four variations; it was produced in a mold with four cavities, and masks from each cavity had slightly different blended patterns of red and green. The different variations can be distinguished by a code printed between the eye holes on the inside of the mask. Type 1-01 and Type 4-01 look the most similar to each other, with prominent green foreheads. Type 2-01 has a red forehead, and Type 3-01 has a thin green stripe on its forehead.

A unique, one-of-a-kind Platinum Avohkii was produced for a Cartoon Network sweepstakes in October 2003 [9] [10]. This mask was made from solid platinum and had an estimated value of $7000 at the time of the contest [11]. The mask was sold for $15,000 in February 2014, making it one of the most valuable Lego pieces ever produced [12]. The current owner of the Platinum Avohkii is Andre Hurley (also known as Mask Collector).

The following Kraata could be found in 8580 Kraata:

The following collectibles released in 2003 could be obtained via contests, promotions, or similar means:

The BIONICLE sets of 2004 introduced the new setting of Metru Nui, the City of Legends, and a corresponding new collectible, the Kanoka disks. Kanoka were not the first collectible disks produced by LEGO; the Matoran sets from 2001 carried Bamboo Disks, and collectible disks were a key component of the Slizers line (also known as Throwbots in some regions), a previous TECHNIC theme. While the older sets had used compliant arm pieces to fling the disks, the sets of 2004 introduced new launchers that could be used to propel the Kanoka through the air. The Kanoka could also glow in the dark.

Each Kanoka disk was inscribed with a three-digit code, which indicated the disk's powers and prescribed its appearance. The first digit represented which of the six Metru that the disk was produced in; the disk's primary color and large central icon also corresponded to that Metru. The second digit represented which of the eight Kanoka powers (such as freezing or regeneration) the disk possessed. Finally, the third digit represented the power level of the Kanoka; the number of curved bars around the border of the disk also corresponded to the power level. Kanoka with a power level of nine were the renowned Great Disks.

Each of the Matoran and Vahki sets released in 2004, along with the large sets 8622 Nidhiki and 8623 Krekka, included a Kanoka disk with a code unique to that set. An additional thirty-six Kanoka designs, including the six Great Disks, were made available in 8613 Kanoka. This set contained two random disks from the collection of thirty-six, a Disk Launcher in the primary color of one of the six Toa Metru, and a pin for attaching the launcher to a set's hand. A final Kanoka disk with a code of 175 was made available with certain comics distributed in European markets [13] [14], resulting in a total set of fifty-one standard Kanoka disks produced.

A few other disks that did not have the standard Kanoka design were also made available in 2004. The set 8601 Toa Vakama included a transparent red Toa Disk. Late in the year, specific retailers began to sell special Vahki sets that included a Disk of Time marked with the special code 199 instead of the set's usual disk [15]. These special Vahki also included a gold version of the Mask of Time. Five hundred Kanoka plated in gold were given as prizes for an instant win game packaged with 2004 canister sets [16] [17]. Several other gold Kanoka were distributed as prizes for other contests, such as speed-building contests hosted at many LEGO retail stores [18] [19].