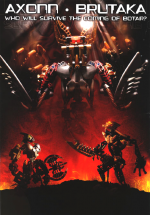 Debuting in the summer (though released earlier in some parts of the world) were also the large boxed sets. Axonn and Brutaka, members of the Order of Mata Nui, and Vezon & Fenrakk, a Piraka defector guarding the Mask of Life sought by all of the characters, each introduced a new piston-based style of building, and included Kanohi masks compatible with previous Toa. 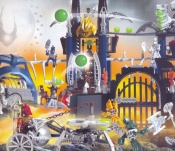 Due to changes in plastic composition, some weapon, mask, and armor pieces, most notably in transparent and pearlescent colors, look different from previous years. Additionally, most sets during this year feature a lighter silver color from that of earlier and later years. However, due to production changes, this is not true for all releases of this year's sets.