"My most loyal servant, Sentrakh is the one being in all the universe I believe I can trust."
— The Shadowed One, Dark Hunters

Sentrakh is a Dark Hunter, trapped in a state between life and death by various experiments, and the Shadowed One's loyal bodyguard. 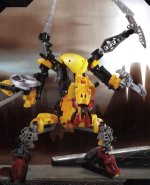 The Shadowed One once used Sentrakh in an experiment to make Dark Hunters that were more loyal and obedient. He succeeded, and Sentrakh was made entirely devoted to the Shadowed One. However, the process destroyed Sentrakh's memory, forcing the Shadowed One to re-teach him everything. It also altered his state of being, rendering him unable to live or die by normal standards.

In the past, the Shadowed One would often use him to punish Dark Hunters that failed in their tasks. Sentrakh's efficiency spawned a rumor that Odina became haunted by the spirits of his victims.

When the Shadowed One went to Metru Nui to find out what happened to Nidhiki and Krekka, Sentrakh accompanied him. While there, Sentrakh stalked Toa Vakama, following him into the Great Temple. Sentrakh attacked the Toa of Fire, but was defeated when Vakama was able to trigger an explosion within the building. Sentrakh survived, and assisted the Shadowed One in returning to Odina, where he helped his master recover from the battle with Teridax.

After the Piraka rebelled, the Shadowed One dispatched Sentrakh to Voya Nui to retrieve them, or kill them if they became too troublesome. However, by the time he arrived, Voya Nui had been returned to its rightful place as part of the Southern Continent by the Toa Mahri, and because of this, he had returned to Odina. He was later forced to relocate to Xia by the Rahkshi.

Sentrakh departed the Matoran Universe after Teridax was killed in the Battle of Bara Magna.

Sentrakh has the powers of illusion, darkness, molecular transmutation, mind wipe, and dematerialization Rhotuka. He is silent, unwaveringly loyal, and will gladly punish anyone who dares to threaten his master. He is described as unliving because he cannot live or die as Matoran see life and death. Sentrakh cannot remember who he is, what his past is, or how he got his powers.

Sentrakh has several claws and blades, and also carries a Rhotuka Launcher. 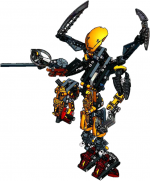