Sea Survival is a promotional game on jetix.co.uk. When it was first released, there was a contest in conjunction with the game in which BIONICLE Barraki sets could be won from getting high scores in the game. The object of this game is to jump onto the Barraki warlords as the Po-Matoran, Dekar, and defeat them while avoiding their attacks. 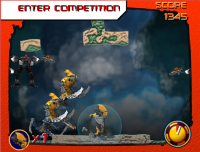 The player takes control of Dekar while trying to defeat three different Barraki, (Mantax, Carapar, and Takadox) by jumping on them (There may be more than one "clone" of the same Barraki). There are six levels in the game, two for each background style, (regular, cave, and Airweed).