Sands of Time is a promotional game on disneyxd.co.uk. 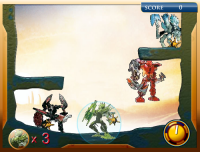 The player takes control of the Glatorian Gresh while trying to defeat three different warriors, Malum, Strakk and a Skrall by jumping on them. Multiple copies of each warrior appear throughout the level.

There are six levels in the game, two for each background style.

If a player completes a level without having their shield eliminated, they recieve a bonus for the next level.