"Some say they used to be a tribe like ours. But now they are little more than beasts."
— Raanu, Secrets of Bara Magna!

The Sand Tribe is one of the many tribes of Spherus Magna.

The Sand Tribe was one of the many tribes situated on Spherus Magna, residing in the wastelands of Bara Magna as nomads. The Great Beings, in need of assistance in leading the planet, created the Element Lords to help them, and the Element Lord of Sand took control of the Sand Tribe.

After the creation of the Element Lords,[1] the Great Beings modified the Vorox and Zesk, giving them stinger tails and other adaptations to aid in desert survival.[2][3]

When Energized Protodermis was eventually discovered on the planet, the Element Lord of Sand commanded the warriors of the tribe to fight for control of it. The war was abruptly ended by the Shattering, which broke the planet into three pieces.

As a result of the cataclysm, the members of the Sand Tribe on Bara Magna regressed into a more primal state of being over generations.[4] As such, they were not chosen to be included in the new social system, and remained in the wastelands. Vorox trapped on Bota Magna retained their intelligence and individual identity, establishing a city on the new planetoid.[5]

The exiled Glatorian Malum gained control of a large pack of Vorox by defeating the old leader, and has led his pack on several missions. 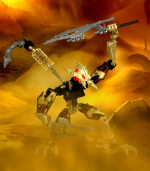 The Sand Tribe's members never settled in a village, living as very reclusive nomads even before the disaster. After the cataclysmic event they reverted into a more primal state. They now wander the wastelands, and occasionally fought in arenas when forced to. Within the Sand Tribe, members are also divided up into packs.

Vorox on Bota Magna did not revert as the southern members did, and they also established a city in the Great Forest.

The Zesk act as scouts and helpers to the Vorox, who shelter and protect the smaller creatures in return.

The Sand Tribe has a large population, being native to the wastelands that comprise Bara Magna.