"Its real name is very long. By the time you finish saying it, you've already been eaten."
— Metus, Desert of Danger

Sand Bats are large, winged snake-like creatures that lurk beneath the deserts of Bara Magna. 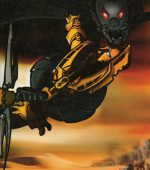 Sand Bats hide beneath the sands in the wastelands of Bara Magna, preying on travelers that pass by their territory.

During an expedition to Vulcanus, Strakk spotted a Sand Bat nearby. The Sand Bat surfaced and attacked a Sand Fox, dragging the fox down into the sands. Another Sand Bat also attacked Gresh in the tunnel later in the voyage, but was consumed by Scarabax Beetles.[1]

While traveling to Vulcanus, Metus and Mata Nui were attacked by a Sand Bat. The creature rammed their vehicle, knocking it over, and dove beneath the sands. The Sand Bat continued to assault them as they attempted to escape, picking up Mata Nui and dropping him to return underground. Mata Nui eventually figured out a weakness in the Sand Bat, and worked with Metus to keep it above the ground, harming the creature with sunlight. Mata Nui let the bat retreat under the sand, convinced it had learned to be more cautious in choosing its prey.[2] 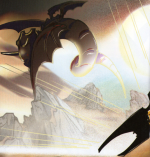 Sand Bats can grow to fifteen feet in length, and possess wings that allow them to fly. Sunlight has an extremely corrosive effect on the Sand Bat, forcing it to stay underground. The creature attacks by surfacing quickly, striking its prey, and returning underground, minimizing exposure to sunlight.[2]

Sand Bats often devastate the local wildlife in a certain area. As a result, there are rarely more than two Sand Bats in a given territory.