"There was nothing quite so pleasant, she decided, as weak, pitiful creatures striving to avoid their inevitable doom."
— Narrator, Web of the Visorak

Roodaka is a cunning and manipulative Vortixx and the former Viceroy of the Visorak Horde.

Roodaka in Web of Shadows

During a rite of passage on her home island of Xia, Roodaka and a partner began to climb the Mountain. They were midway up when her companion got caught in a rock. He cried out for help, but Roodaka abandoned him and used the distraction to climb to the top. Xia custom rewarded her for being the only one to return, and she obtained a high position in society.[3]

After the Kanohi Dragon was defeated on Metru Nui, it was taken to Xia, where Roodaka welcomed it personally and met Toa Lhikan.[4]

Roodaka eventually became affiliated with the Brotherhood of Makuta, providing such aid as contributing her Rhotuka power to the creation of Voporak.[6] When the Toa Hagah raided the Destral Fortress to retrieve the Kanohi Avohkii, Roodaka mutated them into monstrous Rahaga, although they still escaped with the mask.[C25] Sidorak took credit for this and was given the position of King of the Visorak. He named Roodaka as Viceroy of the Visorak, hoping to make her Queen in an alliance that would grant him status in Xia.[7]

Roodaka and Sidorak were later summoned telepathically by Teridax, who had been defeated by the Toa Metru.[8] When the Visorak invaded Metru Nui, Roodaka carved a piece out of the Toa Seal around Teridax. When the Visorak reported that the Toa Metru were captured, Sidorak ordered them to be killed. Roodaka told him otherwise and advised to make it more legendary. Sidorak then had the Toa mutated, with the intent of killing them afterwards. Roodaka and Sidorak watched as the Toa mutated into Toa Hordika, and then fell from high atop the Coliseum.[9]

While reflecting on recent events and her desire to free Teridax, Roodaka placed the stone she had carved from his prison in her chestplate. When a Visorak entered the chamber she was in with news of the Toa's survival, she realized that the Rahaga had saved them.[9]

Roodaka later battled Krahka and defeated her. She then ordered Krahka to place false evidence across Metru Nui implying that the Toa Metru were not destined to be Toa. She also gave Sidorak the advice to unleash the Zivon into the city.[10]

Vakama was caught by Boggarak and imprisoned in the Coliseum, where Roodaka convinced him to betray his friends and join the Visorak horde to free the Matoran. Vakama later captured five of the Rahaga and requested an audience with Sidorak. Roodaka took Vakama into Turaga Dume's inner chambers, where they were joined by Sidorak. Roodaka then presented Vakama as her engagement gift to Sidorak, proposing he be made the commander of the Visorak.

Roodaka called off the Visorak's fighting and confronted the Rahaga and Toa Hordika, demanding the elemental powers of the Toa. The five Toa Hordika fired their Rhotuka at her, but it had little effect on Roodaka. When she threatened to fire a blast of Shadow at the Toa, Vakama aimed his Rhotuka at Roodaka, revealing his change of heart. Roodaka reminded Vakama that she was the Queen of the Visorak, but Vakama, using his authority as the horde's leader, ordered the Visorak to disperse and be free. Vakama then fired his Rhotuka at Roodaka. She fell unconscious, but the combined elements of the Toa struck her shard of the Toa Seal, freeing Teridax from his prison. In gratitude, Teridax teleported Roodaka to safety.[9]

Rumors said that some time after the Great Rescue, she went back to Xia to climb The Mountain a second time to test her cunning.[11]

Following her supposed death in Metru Nui, she was apprehended by a group of Dark Hunters led by Tracker who himself wanted her dead. The agents bullied her into meeting the Shadowed One for a talk about her allegiance and future.[12] For some time following, she served as a double agent to both the Brotherhood and the Dark Hunters, sneaking information to both about the other.[FoF, Ch. 1] 250 years ago, Roodaka passed along some information to Zaktan to forewarn him of a Brotherhood of Makuta attack on a Brotherhood base the Dark Hunters had taken over.[4]

The Shadowed One later made a deal with the Toa Nuva to eliminate her, but the Toa betrayed him. Warning her that the Hunters were out to kill her and the Brotherhood would not be far behind, they blackmailed Roodaka into reversing her mutation of the Rahaga. As Toa Hagah once more, they took Roodaka into their custody.[TNB, Ch. 6]

Roodaka was soon taken by the Order of Mata Nui to be part of a team led by Brutaka, including Vezon, Spiriah, Carapar and Takadox, and sent on a suicide mission to find Miserix, the former leader of the Brotherhood of Makuta.[FoF, Ch. 1]

When the team traveled to Stelt to purchase a boat, Brutaka announced he would use Roodaka as payment, and she was restrained by Carapar. However, before he handed her over, Brutaka knocked the trader unconscious and proceeded to steal the boat.[FoF, Ch. 2] Later in the journey, he revealed to Roodaka and her compatriots what they were after, as well as the reason why they were chosen: they were all expendable. After this, they were intercepted by a fleet of Zyglak, servants of Spiriah. Spiriah claimed control of the vessel, taking his teammates prisoner, and turned towards Zakaz.[FoF, Ch. 3] Roodaka tried to worm her way into Spiriah's good graces, but Spiriah was wise to her treachery and refused. Spiriah's plot was thwarted when his Zyglak fleet was destroyed by an army of Ehlek's species, who were loyal to the Order of Mata Nui. The team was then joined by an even more brutal teammate: Lariska, one of the most feared Dark Hunters. With Spiriah sufficiently intimidated, the group set off once more.[FoF, Ch. 4]

At their next stop, they picked up weapons for their mission, and Roodaka claimed a new Rhotuka Launcher. However, they were then attacked by the legendary entity Tren Krom.[FoF, Ch. 5] After a conversation with the horrific entity, during which Carapar was killed and the others given a nightmarish vision, the team was allowed to leave.[FoF, Ch. 6]

Shortly after fleeing Tren Krom's island, the team arrived on the island of Artidax. Almost immediately after arriving, Spiriah was attacked by living sand. Roodaka used her mutation spinner to mutate the sand into a swarm of fireflyers, freeing Spiriah. After some encouragement and trickery from Brutaka, Spiriah agreed to act as the team's guide of the island. Before entering into a tunnel, Vezon stepped in front of Spiriah and pointed out a thin vine that had been set as a tripwire. The team entered the tunnel, but were trapped inside when Takadox cut the vine and caused an avalanche.[FoF, Ch. 7] Roodaka used her shadow energy to free herself from the rubble while expressing a desire to kill Takadox, but Brutaka insisted that they move onwards. As they passed over a bridge, Roodaka became frustrated with Vezon's rambling and demanded he be quiet. He then brought everyone's attention to the floor, which was swarming with thousands of insectile Rahi.[FoF, Ch. 8] After Spiriah unsuccessfully tried to control the Rahi, Roodaka mutated the insects that were approaching from behind, turning the insects against one another. She then mutated the Rahi in front of the team, creating an opening. In the next chamber, the team found Miserix in chains.[FoF, Ch. 9] After Miserix killed Spiriah, Brutaka and Roodaka channeled their powers and broke his bonds. Roodaka attempted to persuade Miserix to turn on Brutaka and side with her, saying Brutaka and his allies wished to use him as a pawn. Miserix replied with a roar that sent Roodaka into a wall, knocking her unconscious. Brutaka then took Roodaka, Vezon, and Lariska onto Miserix's back, who flew off towards the north.[FoF, Ch. 10]

Upon arriving at Daxia, Roodaka was imprisoned there.[DW, Ch. 1] She was later taken to the Pit by Botar's Replacement.[13]

After Teridax was killed and the universe was critically damaged in the Battle of Bara Magna, Roodaka, along with the other Pit prisoners, was rescued and taken onto Spherus Magna.[14][15]

In an alternate universe, Mata Nui completed his mission without interruption, and allowed some of the inhabitants of the Matoran Universe onto Bara Magna. Roodaka, along with the rest of the Vortixx, Skakdi, Makuta Miserix, and the Bone Hunters, became enemies of the Agori. The army attacked Tesara, where a dimension-hopping Vezon had just appeared. The army broke through the ranks of Skrall warriors, and the Skakdi hurled torches, setting Tesara ablaze.[RoS, Ch. 5]

In another universe, Roodaka worked for the Toa Empire. She was responsible for mutating Toa Naho into an exhibit in the Archives.[DM, Ch. 6]

In a reality where Mata Nui died, Roodaka was appointed as part of the ruling council of the Kingdom of the Great Spirit. When Takanuva entered the Coliseum, Roodaka and Turaga Takanuva were discussing the Panrahk that had appeared within the Kingdom.[TK]

Roodaka is extremely duplicitous, acting out of her desire to be in the best position possible in any situation. She is incredibly manipulative and persuasive, able to effectively convince others into playing parts in her plans, while disguising her true motives. Despite her manipulative nature, she can develop genuine respect for those more powerful than her, like Teridax. Unlike other Vortixx, she is not motivated solely by profit and survival, but instead has grand aspirations of ruling.[11] 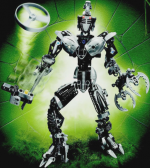 Roodaka can tap into her dark side, something she learned through extensive training, and use it to wield Shadow energy from her hands. Roodaka also has the ability to manifest a Rhotuka with the ability to instantly and permanently mutate its target as per her whim. The only way to reverse these mutations is for Roodaka herself to hit the target with another Rhotuka and reverse the effects.[TNB, Ch. 6] She also has enormous strength, being able to tear a buried Troller out of the ground.[10]

Roodaka carried an artificial launcher that allowed her to fire Rhotuka spinners, which was taken by the Order of Mata Nui when they detained her. While on her mission to free Miserix, Roodaka was temporarily granted a new Rhotuka launcher, but this was again taken from her following the mission.

She can also use her Catcher Claws[1][2] to snatch Rhotuka spinners out of the air, add a poison power to them,[Product info] and throw them back at their creators.[8]

8761 Roodaka was released in 2005 as one of the Titan sets. In all, the set included 233 pieces. Her Rhotuka ripcord rather than her launcher was attached to her right arm, and by sliding the launcher construction itself forward one could fire the silver Rhotuka spinner forward at high velocity. An axle held it in place on the arm otherwise. She could be combined with Keetongu to create a model of the Shadowed One, or with both him and Sidorak to create Voporak.

"Always remember this, little hordeling... though I am not a Visorak, I too can weave a web."
— Roodaka to a Boggarak, Shadow Play

"I am a Rahi, one of those your hordes have been hunting in this city. And I have come to strike you down like the monster you are."
— Krahka to Roodaka, Challenge of the Hordika

"It is only right. A legendary Rahi must meet a legendary death, after all."
— Roodaka, Web of Shadows