The Rahkshi Mini Promo CDs were promotional CD-Roms packaged along with the six Rahkshi sets in late 2003. Each one featured information about the Rahkshi they were packaged with (as well as on Takanuva), and their powers and weapons. 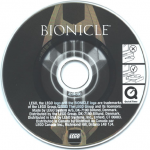 CD art for the Guurahk CD

The CD begins by showing a short movie, composed of clips from the six Rahkshi animations and the Takanuva one. Once the movie ends, the main screen is shown. The narrator describes how Teridax had unleashed the Rahkshi, and it is up to the Toa Nuva and Takanuva to defeat them.

On the upper-left corner of the screen are three buttons. The first one would link to nine different downloadable wallpapers for the desktop, featuring pictures of Mata Nui, Teridax, the Kraata, Takanuva, and the Rahkshi that was packaged with the CD.

The third button would simply show the movie from the beginning of the CD.

Once clicking on the Rahkshi shown in the Main Screen, the narrator will describe the Rahkshi's abilities and powers. Four buttons can be seen in the left side of the screen.

The Guurahk CD showing the Staff of Disintegration

The six Kraata carried by the main Rahkshi

A short explanation about the Kraata is provided, such as about their power to spread infection, or that once they are exposed to Energized Protodermis they can turn into Rahkshi shells themselves. The animated image shows the Za, Ye, Xi, Vo, Ul and Cu Kraata in each of the six power levels (not including the Shadow Kraata).

This screen allows the user to click and spin a 3-D render of the Rahkshi in set form, letting the user see every angle of the set.

A twenty-second animation of the Rahkshi packaged with this CD is shown. Clips from these animations are used in the starting movie and in the Takanuva animations.

In the Main Screen, once clicking on Takanuva, the narrator will describe his abilities and powers. Four buttons can be seen in the left side of the screen.

The narrator provides a short explanation on Takanuva's Toa Tool, the Staff of Light, and its powers, such as the ability to channel Takanuva's Light energy, or throw spheres of Light.

The Great Mask of Light

Again, the narrator provides information on Takanuva's Kanohi, the Avohkii. He explains how it can be used to turn a foe's anger into feelings of peace, and freeze an opponent in a column of light.

Similar to the Rahkshi section, this interactive image can be dragged so it would show the Takanuva set in every angle.

A screenshot from Takanuva's animation

Similar to the Rahkshi animations, this would also show Takanuva in the dark chamber. Looking around, he senses that the other Rahkshi are closing in on him, until finally they use their staffs to light the ground beneath him in the form of the island of Mata Nui.