"What? Where did it get such power?"
— Toa Nuva Tahu, Secrets and Shadows 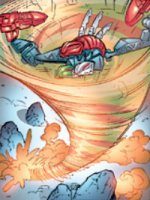 Rahkshi Kaita Za was formed alongside Rahkshi Kaita Vo in Le-Wahi, where the two downed all the trees that they encountered as they traversed the region. Its trail of destruction was recognized by Tahu as much like that a cyclone leaves, so he and his Toa Nuva brothers Lewa and Kopaka followed the path, stopping briefly to defeat a Shadow Kraata and two Matoran villagers whose masks it had infected. Rahkshi Kaita Za waited in ambush with its comrade at the end of the trail, rendering Kopaka cowardly with its fear power and vexing Tahu with its anger power. Lewa Nuva, keeping his senses, sensed the unnatural emotions among his brothers and identified their foes.

Tahu Nuva confidently prepared to strike at Rahkshi Kaita Za, and was caught unaware by the cyclone attack which it had gained in its fusion. The attack brought both Tahu and Kopaka to their knees, and Lewa quickly joined them after confronting the Rahkshi Kaita Vo and its hunger power. He was saved from the ensuing energy blast drawn from his own strength when Kopaka brought up three ice walls, reflecting the attack back on Rahkshi Kaita Za. Tahu collapsed a rocky peak on top of Rahkshi Kaita Vo before beating a tactical retreat to seek the aid of the other Toa Nuva. The Rahkshi had separated before they were next encountered.

Rahkshi Kaita Za maintains the Fear, Anger, and Poison powers of its component Rahkshi and adopts a new power: the power to transform into a living cyclone. It has three heads and two powerful fists. It is controlled by Kraata Za, Turahk's Kraata, which possesses the fear power.

The Rahkshi Kaita Za as a combiner

The Rahkshi Kaita Za can be built from the Rahkshi canister sets Turahk, Lerahk, and Kurahk. Instructions to build it were divided into three sections and placed into the instruction booklets of the three Rahkshi sets. As with the individual Rahkshi, a compartment on its back holds the Kraata. Instructions were also on BIONICLE.com.