Rahkshi Kaita Vo is a fusion of the Rahkshi Vorahk, Panrahk and Guurahk. Its appearance is that of a four-legged creature with a short Rahkshi rider.

Rahkshi Kaita Vo maintains the disintegration, shattering, and hunger powers of its component Rahkshi and adopts a new power: the power to release any energy absorbed from foes with its hunger power in a lethal blast. The rider wields a staff through which it can channel any of these powers. This Rahkshi Kaita takes its name from Kraata Vo, Vorahk's hunger Kraata, which controls it. 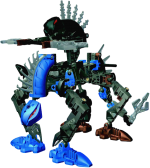 The Rahkshi Kaita Vo as a combiner

Rahkshi Kaita Vo can be constructed using the parts of the Rahkshi canister sets Vorahk, Panrahk, and Guurahk. Each component's instruction booklet contained a portion of the Rahkshi Kaita's instructions in the back. Instructions could also be found on BIONICLE.com. Axles on the anterior and posterior sections of the steed allow the legs of the corresponding section to alternately raise or lower. An axle on the back of the rider, meanwhile, causes it to swing its arms and staff. The Kraata is held within a compartment on the rider's back.