"After all, he was a hero, respected and admired by his friends for his courage. He had always tried to live by the three virtues of unity, duty, and destiny."
— Narrator, Shadows in the Sky

Radiak is an Av-Matoran and former Shadow Matoran.

Radiak was created by the Great Beings to contribute to the construction of the Great Spirit Mata Nui. Laboring in darkness, he participated in the creation of the islands and locations of the Matoran Universe. Radiak and the rest of the Av-Matoran left their homeland on the Southern Continent to prepare Karda Nui for the Great Spirit's awakening. During this time, he developed a close friendship with Photok. Once arrived in the universe core, the Matoran suffered attacks by the Avohkah, Rahi-by-products of their labors. However, the Toa Mata soon arrived to deal with the threat.[5] The Av-Matoran later returned to their homeland in the caves below the Southern Continent.

During the earthquake caused by the Great Cataclysm, part of the Av-Matoran homeland was damaged and fell into Karda Nui, creating the Stalactite Villages. Radiak took up residence in one of these villages and adapted to the hardships that the new lifestyle presented.

Radiak lures Pohatu and Photok into a trap.

After a thousand years of peace, the Brotherhood of Makuta launched an invasion of Karda Nui. After the Makuta struck, he continued to fight for what he believed in. One day, as he went to repair a Lightvine, his Light was sucked from afar by Makuta Vamprah, using his Kanohi Avsa. Transformed into a Shadow Matoran, Radiak went off to the Makuta's base and was mutated by Makuta Mutran into a four-legged being, due to the fact that Mutran was moody at the time.

When Toa Mahri Matoro used the Kanohi Ignika and brought Mata Nui back to life, the resulting light blinded the Makuta. The remaining Av-Matoran proceeded to mount an offensive against the Makuta, who were unable to see. Unwilling to let this be a major setback, the Makuta used Shadow Matoran pilots for their 'eyes'. Radiak quickly became the favored sight of Makuta Antroz. During one such battle, the Toa Nuva suddenly appeared. Even though confused, they aided the Av-Matoran, forcing the Makuta and Shadow Matoran into retreat.

Later on, while Pohatu and Photok were on guard duty, Radiak lured Pohatu and his former best friend, Photok, into a trap set by the Makuta, saying he had stolen the Makuta's battle plans. This quickly led to another air-conflict, during which the Toa were captured. After they freed themselves, yet another conflict ensued, during which the Shadow Leech Hive was destroyed. Mutran, sensing a Makuta defeat, called his fellow brothers to retreat into the swamp before retreating himself. Radiak followed Antroz into the swamp, preparing for the final battle.[6]

A stylized depiction of Radiak in the Comics

After Antroz entered the Codrex, Radiak was left outside. When he stole the Jetrax T6, Kopaka left the Codrex in pursuit of Antroz, only to be stopped by Radiak. Takanuva emerged during the fight, and took over for Kopaka so he could continue his chase. During the fight, Radiak mocked Takanuva, calling him a "Toa of Twilight," but instead of attacking him, Takanuva became more determined to find a cure for him. With help from Tanma, Photok, and Solek, Takanuva was able to subdue Radiak. After some time, Vican approached the group and stated that he had found a cure for the Shadow Matoran in the form of a Rahi. They found the Rahi, a Klakk, and Radiak tried to hit it with a shadow blast. He missed, but did manage to anger the Klakk which then unleashed a sonic scream, turning Radiak back into an Av-Matoran. Upon his restoration, he revealed part of the Makuta's plan.[TB]

Under the order of Takanuva, Radiak and the other Av-Matoran fled Karda Nui and traveled to Metru Nui. There they celebrated the reawakening of Mata Nui, although the occupants of the Coliseum were soon interrupted by Teridax, who then announced his rule over the universe.

When the Great Spirit Robot was damaged beyond repair and Teridax was defeated by Mata Nui, he sent a wave of Life energy throughout the planet, which, among other things, reversed the mutations the surviving Av-Matoran received from Mutran.[4] The Matoran of Metru Nui then made a mass exodus to the reformed planet of Spherus Magna.[7] 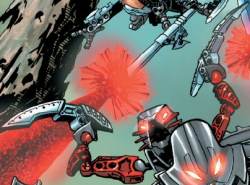 Both prior to and after his time as Shadow Matoran, Radiak had the ability to change how the color of his armor appears. He has been trained to use this ability reflexively, helping keep his elemental affiliation secret. Radiak can also channel small amounts of Light energy through his hands or tools. These abilities were briefly replaced with shadow powers upon his transformation into a Shadow Matoran, but have since been restored.

As a Shadow Matoran, Radiak had the ability to make his opponents sloth-like in that they would be too slow to make an escape. He could only use this ability when he was in physical contact with a Makuta.

Radiak is renowned for his courage and warrior-like spirit. After being corrupted, he enjoyed fighting his old friends and witnessing them being ambushed by the Makuta.[Bios] He fought using his teeth and sharp leg blades.[Bios]

As an Av-Matoran, Radiak wore a noble-shaped Hau.[1] He switched to a noble-shaped Jutlin[3] while a Shadow Matoran, but has since returned to wearing his former mask.[8]

When he was an Av-Matoran, Radiak wielded dual Power Swords through which he could channel small amounts of his light energy. He also had a rocket booster on his back. After Mutran mutated Radiak into a four-legged Shadow Matoran, his tools became attached to his hands, and his legs featured a pair of blades with which he could fire blasts of Shadow. Radiak could also fight with his teeth.[Bios] He has since been transformed back into an Av-Matoran,[TB] and his mutations have been reversed.[4]

Radiak combined with the Gorast set.

8947 Radiak was released in early 2008 as one of the six Matoran sets and consists of sixteen pieces. He can be attached onto Antroz's back. As is typical of Shadow Matoran, Radiak wears a dual-colored mask—in his case, a blend of black and dark red plastic. Along with Tanma, Lewa, and Antroz, Radiak is part of a combiner set depicting Spiriah. He is able to combine with any of the Phantoka or Mistika sets, and is advertised as able to combine with Gorast, but in-story, he only ever combines with Antroz.

"Why are you hiding? You always used to talk so brave … come out and fight!"
— Radiak, BIONICLE.com