"Very well. I am putting the survival of my people into your hands, Mata Nui. I will give you what you ask. But know this… betray us, and no suit of armor will protect you from my revenge. That artificial body existed as shattered parts once before, and it can do so again."
— Raanu to Mata Nui, Journey's End

Raanu is a venerable Agori and the leader of the united tribes on Bara Magna.

Raanu was born on Spherus Magna a little over 265,000 years ago. He was very young when Lein passed away.[1] As Raanu grew older, he witnessed the Dreaming Plague and the creation of the Element Lords by the Great Beings. Raanu was employed in the fortress of the Element Lord of Fire.[2]

Toward the end of the war, when the Great Beings began releasing the Baterra, Raanu was the first Agori to see one of them. He was also one of the first to see the Great Spirit Robot being built.[4]

Raanu and Kyry returning with a vial of Energized Protodermis

When the Fire Tribe seized the spring, Raanu and Kyry rushed to the site to warn the Element Lord of Fire what would happen if they tapped the energy of the substance. Their warning went unheeded, and the Shattering occurred, ripping their planet apart.[3]

Raanu was left trapped on Bara Magna. He soon came to live in the village of Vulcanus, which was in turmoil at the time. Many residents had fled into the wastes, though others stayed hidden in what was left of their homes. Raanu helped organize rebuilding efforts, and suggested that the village's lava flow could be used for repairing metal tools and weapons. When the veteran warrior Certavus proposed a system of Arena Matches to settle disputes between villages, Raanu declared his support for the idea. This, along with his other services to the village, led to his election as village leader when the previous elder was slain by Vorox.[2]

The behavior of his Second Glatorian, Malum, eventually became problematic for Raanu and the village. A brutal defeat of Vastus in an Arena Match earned Malum the ire of the villagers and Glatorian, and Raanu eventually received word that, were Malum to be made their Prime Glatorian, the other villages would refuse the challenges of Vulcanus. Raanu approached Malum and asked him to quell his temper, but Malum refused. Malum eventually attempted to kill Strakk after a lengthy arena battle, but was stopped by Gresh and Ackar. Left with no other choice, Raanu banished Malum from their village, and forbade him from returning.[5]

After Malum was exiled, Raanu found himself in a desperate search for a replacement Glatorian to fight for his tribe. The Skrall took advantage of their inability to claim resources, conquering the flame geysers north of his village. Unable to challenge them, he beseeched Metus to find him a Glatorian to do battle for the territory. Metus informed Raanu that no Glatorian would fight for him if it meant fighting a Skrall.[6]

As his village suffered from daily Bone Hunter raids, and knowing that the village would be undefended if their sole Glatorian Ackar were traveling to a match, Raanu turned to a helpful Agori to seek out Malum and ask him to return to defend the village. Malum was unwilling to return, but he instructed the Agori on a way to unleash the Vorox on the Bone Hunters, distracting them and temporarily alleviating the raids on Vulcanus. Raanu was awed by the courage shown by the Agori and rewarded him with an Honor Badge to let all know of his deeds. The leader then sent him to Tesara to seek out both Tarduk and the Glatorian Gresh, to see if they might have a way to save Vulcanus. The Agori later returned with a document that contracted several Glatorian to defend the village from the Hunters. Raanu praised him for his efforts and gave him the highest Honor Badge available as way of thanks.[7]

A caravan containing Exsidian won by Vulcanus did not arrive in the village at the appointed time, and Raanu was worried by its absence, as it was a threat to the social system. He discussed the event with Metus, who had organized the convoy, and warned him of what would happen if the payment did not arrive. Ackar calmed his leader, and convinced him to wait while he searched for the convoy.[8]

War with the Skrall 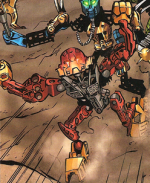 Raanu traveled to Atero in order to watch the Great Tournament. After conversing with Berix and Metus, Raanu and the other two Agori decided to travel outside the city, to see if any Skrall were approaching. They were met by a large army of the Rock Tribe, who were traveling towards the arena. Raanu left his friends and ran back to the Arena Magna to warn the competitors of the army's attack. As the Glatorian left to combat the Skrall, Raanu assisted in evacuating the city, sending the Agori back to their villages. A Skrall attacked him, but was stopped by Gresh, who let the Agori escape. Raanu later reunited with several Glatorian and Agori, and they discussed fighting the Skrall.[9]

When Raanu entered Vulcanus' inn, he was confronted by Gelu, who showed him a detailed map of Vulcanus, one that he took from Fero, which displayed the village's defenses, indicating a plan to attack. Raanu was extremely worried by the news, and was torn between making a stand, and fleeing to preserve the lives of the villagers. Gresh convinced Raanu to make a stand, and Ackar agreed to head the efforts. He ordered two of his rookie Glatorian to go to Tajun, and recruit Kiina and Tarix.

All the Glatorian rode out to find help, and Raanu stayed behind to help fortify the village. Kiina arrived soon after, and rebuked Raanu, as his warriors had died before delivering the message. Raanu continued to make the necessary preparations in the village as more Glatorian arrived.

After the Bone Hunters arrived, they were seemingly driven off by the traps set. Upon hearing from Gresh that the Bone Hunters were riding far away, Raanu dismissed the Glatorian, and allowed them to return to their village. The Glatorian insisted on staying behind, in case the Bone Hunters returned. Raanu disagreed, and ordered the Glatorian to leave. Raanu approached Metus before he left, and pleaded for the Ice Agori to find him new Glatorian. The Fire Tribe elder promised Metus various royalties for the task, including a match between Ackar and Strakk.

The Bone Hunters later returned and assaulted Vulcanus. As Ackar fended them off, the other Glatorian arrived, and succeeded in defeating the Hunters. Raanu checked the health of the villagers, and thanked the Glatorian for their help.[10]

While observing an arena match between Strakk and Ackar, Raanu was approached by Metus, who was accompanied by Mata Nui. Raanu spoke with Mata Nui about how Ackar had lost the will to fight, and assumed that Metus had brought Mata Nui to replace Ackar.

Raanu later traveled to Tesara to watch a match between Tarix and Vastus. Ackar, Mata Nui, Kiina, and Gresh arrived, informing the Agori and Glatorian at the village of the Attack on Tajun. When Ackar called for an end to the arena match system, Raanu protested, and told the villagers to trust their leaders. Ackar displayed his new Fire powers to quiet the crowd, and informed them that Mata Nui would be willing to help them. Raanu questioned the trustworthiness of the newcomer, and Ackar had Mata Nui transform Tarix's weapon as proof. In response to the impressive feat, Raanu asked the Glatorian to swear their allegiance to avoid future confrontation.[11]

When the village pieces were unified to become a Mega-Village, the Council of Elders named Raanu as the chairman of the group.[12]

Mata Nui returned from the Valley of the Maze with a power source, and revealed that the Mega-Village was actually a robot constructed by the Great Beings. He requested the use of the robot to defend them from an impending evil with other Glatorian. Raanu vehemently refused to allow Mata Nui to disrupt their shelter. After speaking with the Agori leaders and other Glatorian, he was given the choice of refusing Mata Nui's request, as they were confident that he would make the best decision.

Reflecting upon his own work with the Great Beings and the recent events, Raanu went to Mata Nui in the desert, revealing that he knew what the Great Spirit was. Mata Nui told Raanu of Teridax flying to Bara Magna and the threat he posed to the Agori and Glatorian, and Raanu finally submitted to Mata Nui's need. He warned Mata Nui that he would find a way to destroy him should he betray the Agori, before he left to evacuate the residents of the Mega-Village.

Mata Nui succeeded in defeating Teridax and healing the planet, and Raanu now resides on Spherus Magna once more.[4] He is part of a group of elders from the newly united civilizations (also including the Turaga) who are working out a new social structure for Spherus Magna.[13]

Raanu in The Legend Reborn

Raanu can appear fierce at times, but that is solely due to concern for the welfare of his tribe and village, Vulcanus. He is also quite quick and strong. He liked to fight in the arena to stay sharp with his fighting skills.[citation needed] The destructive potential of Glatorian often worried Raanu, and he treated the warriors warily.[10]

Raanu carries a Fire Blade, a bladed weapon that can be ignited and used as a torch. He also carries a shield.

8973 Raanu was released as one of six Agori sets in early 2009, containing fourteen pieces.

"For a long time I have accepted that life for me and my people must be the way of toil and trial. But I dream of a better world ..."
— Raanu, My LEGO Network BIONICLE Campaign

"Faced with a horde of Skrall on the march, most Agori would freeze in panic. But Raanu is a leader, and knows what he must do."
— Narrator, The Fall of Atero

"We'll make them wish they never came here. Let them raid some other village instead -- Vulcanus will not surrender!"
— Raanu, Raid on Vulcanus