"If it were possible for a biomechanical being to be a perfect physical specimen, Pridak was it. Even if his armor and weapons had been taken away, he would still have radiated power."
— Narrator, City of the Lost

Pridak is the vicious and hostile leader of the Barraki warlords and previously was the unofficial leader of the League of Six Kingdoms.

Pridak was originally a servant to the Brotherhood of Makuta, and the aide of Icarax. While working for the Brotherhood, Pridak traveled to Xia, to assist Icarax in convincing the Vortixx to lower their prices. He was intrigued by the city and its importance, and Mutran and Icarax eventually dragged him back to Destral.[4] Later, he was assigned to rule a small, worthless area, but it was enough to incite his lust for ruling others. He abandoned service under the Brotherhood and took up a life as a conqueror.

Pridak, along with the other five Barraki, formed an alliance as the League of Six Kingdoms, conquering much of the known Matoran Universe. They once met with members of the Brotherhood to discuss an alliance. The Makuta were unwilling to cooperate, but reluctantly agreed to send war Rahi when threatened by the Barraki.[5]

Pridak eventually came to rule the northwestern part of the Matoran Universe, as well as Xia.[6] When he allied his region with that of Takadox, he forced Kalmah to join for fear of being cut off from the rest of the universe. In their final stages of a plan to assault and overthrow Mata Nui, the Barraki were captured during an ambush by the Brotherhood of Makuta. Moments before their execution by Teridax, Botar appeared and exiled them to the Pit. They remained there for thousands of years until the Great Cataclysm shattered the dome of the Pit and released the prisoners out into the ocean. Pridak and the others swam out and were subsequently mutated into monstrous forms.[7]

Exploring the immediate area, Pridak claimed the Pillars of Salt as his favorite hunting grounds, and established himself as leader of the Takea sharks.

After the Kanohi Ignika fell into the sea, Pridak learned of the mask's arrival and set out to find it. While searching, he encountered Defilak's Submarine, and unleashed his Takea sharks upon it. He took the four Matoran occupants, Gar, Idris, Defilak and Sarda, and brought them to an undersea cave. After throwing Sarda to his sharks, Pridak demanded the location of the Ignika from the remaining three. Defilak eventually agreed to show him, and led him away from the cave. While waiting for the Matoran to reveal the location, Pridak spotted an enlarged Venom Eel, and abandoned Defilak to deal with it. Pridak discovered a fleeing Mantax, and the two journeyed out.[7] 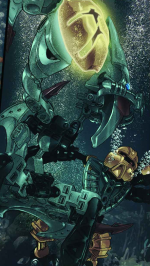 Pridak taking the Mask of Life from Dekar

The two Barraki met with Ehlek and Carapar and a mutated Brutaka, who had recently been banished to the Pit. The four went into the cave, where they revived Kalmah and found the Po-Matoran Dekar holding the Ignika in his hands. After Brutaka made a failed attempt to seize the mask and was torn away by a Giant Squid, Pridak went towards the Matoran and took the mask, causing a bright light to spread throughout the sea.[7]

Pridak was cursed by the Ignika, the mask enhancing his rage and madness. After regaining consciousness, he threatened to smash the Mask of Life if Kalmah did not get away. Takadox managed to hypnotize him, and he eventually calmed down. Pridak led the Barraki to meet the Toa Mahri, and revealed to them that he was in possession of the mask. Pridak decided to take the Toa to the Barraki's caves, where they were held prisoner by sea creatures. He then traveled with the Barraki to visit Nocturn, and assigned him to guard the Ignika.[8]

Takadox and Pridak confronted Matoro and a Maxilos robot, and attacked the pair. Ehlek's forces, under the force of Hewkii's Garai, smashed into Pridak's sharks during the battle, inciting a fight between the two Barraki.[8] After recieving word that Mantax demanded a gathering, the two halted their battle. The Barraki later met at the Razor Whale's Teeth, where Mantax revealed that he had acquired the Mask of Life. Mantax provided evidence of a traitor in their midst, though an avalanche triggered by Hydraxon interrupted the meeting, and Takadox revealed himself to be the Brotherhood informant. The Barraki, including Takadox, gathered their armies to chase after the Toa Mahri, who had managed to take the mask. While chasing the Toa they were confronted by the Maxilos robot, who revealed himself to be Teridax. Pridak and the Barraki allowed themselves to be defeated by Teridax, secretly amassing their armies. After regrouping, they launched their armies at the Makuta, destroying his armor and defeating him.[9]

The Barraki quickly caught up with the Toa, and overwhelmed them with their massive army. They were on the verge of victory when Jaller started preparing a Nova Blast. Pridak ordered his army to take him out, but they were unable to do so. When Jaller was about to unleash the Nova Blast, Matoro transported the Toa Mahri to Metru Nui.[9]

Mantax gave Pridak the helmet of the original Hydraxon the next day. Pridak realized that the current Hydraxon was not the original, and gathered his army of Takea sharks to find the jailer.[10]

After ambushing Hydraxon, Pridak explained how Dekar had disappeared just when Hydraxon appeared, hoping to trick the jailer into abandoning his job. Hydraxon refused to let the Barraki to deter him, and jailed Pridak after defeating him.[10]

Not long after, Pridak and the other three Barraki remaining in the Pit were offered the chance to fight the Brotherhood of Makuta in the Order of Mata Nui's army. Pridak accepted the offer for all of the Barraki, seeing an opportunity to rebuild the League of Six Kingdoms.[11]

After being freed from the Pit, Pridak quickly gathered an army and ventured out to conquer. On the first island he attacked, Pridak discovered that an old fortress existed underneath the one being assaulted. He explored the fortress, and discovered a mound of rubble with writing on it. Believing that it was destroyed by someone who did not want the information known and thus it would be of some value, he began to patiently piece the wall back together.[12]

After reading the details of the Brotherhood's plot, he contacted the other Barraki to propose an alliance to the Shadowed One, making an offer of information on the viruses the Shadowed One had found. The leader of the Dark Hunters agreed, on the condition that he and Pridak meet in the realm of Karzahni. They met, and struck a deal to take Teridax out of power.[13] The Shadowed One's signal failed to appear at the appointed time, and Teridax remained in power. With his legions ready for battle, Pridak decided to march to Metru Nui anyway.[14]

Before Pridak and his army could reach Metru Nui, Teridax was killed. As a result, the warlord marched his army out of the universe onto Spherus Magna, where his mutations were undone by Mata Nui using the Ignika.[15]

Pridak is one of the strongest and the fastest of the Barraki. He is a fiery leader and will not hesitate to punish disobedience or insolence with pain. Pridak rules according to his emotions, and is able to hold a grudge against someone indefinitely. Although hot-headed, he is very practical; he saw no gain from killing the Matoran of Mahri Nui, and so he chose not to. However, if he could have gotten something out of it, he would gladly have destroyed the entire city without any qualms.

He sees himself as born to rule, entitled to power, and anything he does to maintain that power is simply being true to himself, not caring who or what gets hurt.

Pridak also took great pride in his personal appearance, and viewed his mutation as one of the worst possible punishments that he could be dealt.

He had the enhanced senses of a shark (keen eyesight, hearing, and smelling), as well as electroreception, the ability to sense electrical fields, a result of his exposure to the mutagen; after Mata Nui cured his mutations, he lost these traits.

Pridak's curse while holding the Ignika was a state of heightened rage and paranoia, which nearly drove him insane. Takadox was able to use his hypnotic powers to quell these emotions, allowing Pridak to function normally while holding the Mask of Life.

Pridak in Barraki: Creeps From the Deep

Pridak fights with two Shark Tooth Blades (which are nearly as strong as Protosteel), and formerly used a Squid Launcher, before it was confiscated by Hydraxon.

In the past, while a part of the League of Six Kingdoms, he controlled a force of Matoran criminals, violent brutes and many beings interested in destruction.

Pridak established himself as the alpha male of Takea Sharks, some of the fiercest underwater Rahi, when he escaped from the Pit, and transformed them into his legion.

Upon his release from the Pit, he gathered an army of ex-Dark Hunters, rogue Vortixx, and Skakdi.

Pridak can be combined with the Kalmah and Takadox sets in order to create the Zyglak model.

"You have a choice, Makuta – cooperation, or conquest. I trust you will choose wisely."
— Pridak to Miserix, The Mutran Chronicles

"Since he's Ehlek's lieutenant, Pridak decided an interrogation was needed ... code for 'Pridak hasn't eaten in an hour.'"
— Kalmah, Prisoners of the Pit 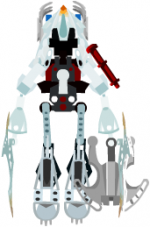