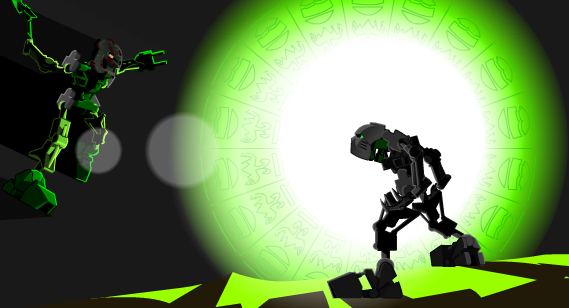 The Characters and Objects depicted in the BIONICLE storyline wield a myriad of Powers.

An ancient, tentacled entity named Annona, also responsible for the Dreaming Plague, granted a group of female Skrall powerful Psionics abilities. However, she did this inconspicuously, and the empowered Skrall believed the Great Being Angonce was responsible.

The Great Beings, powerful inventors, experimented with giving their subjects a variety of powers. The results of their activities formed the Element Lords of Spherus Magna, who were each given control over a respective Element. The Great Beings would later come to refine this ability when creating the Matoran Universe, endowing the primary species of the universe with repressed Elemental Powers. The evolved form of a Matoran, a Toa, was granted full command of a certain natural power. Other beings were also given Elemental Powers, such as the Bahrag and then robotic creations like the Bohrok. Some species, Rahi, and even objects such as Kanohi and Kanoka gained less potent abilities.

Mata Nui, host of the Matoran Universe, was given the ability to imbue powers into beings. He created various beings, including more Matoran and the Makuta species, who were granted both the elemental power of Shadow and an additional forty-two powers to help them contend with the Rahi they were intended to create. One of these powers can be passed on to a Kraata produced from a Makuta, and in turn the Rahkshi it may become. The Brotherhood of Makuta also gave powers to many of their Rahi creations, including the Visorak.

Matoran Universe crafters such as the Matoran, the Vortixx, and Artakha would also learn to create objects with powers, such as Kanoka, Kanohi, and various artifacts and weapons.

Predominantly used throughout the Matoran Universe, but present on Spherus Magna as well, Elemental Powers allow the creation and manipulation of forces of nature.

Several powers exist that involve manipulating only a certain portion of an Elemental Power:

Abilities are a specific manifestation of powers, wherein users take a naturally occurring trait and use it to perform a power.

Various Rahi and sentient beings in the Matoran Universe are gifted with natural Rhotuka Launchers that allow them to fire spinning wheels of energy that can be manipulated with their thoughts. There are also some who use artificial Rhotuka Launchers, such as Vortixx, the Toa Hagah, and Dark Hunters. The powers of the user vary, often depending on their species, ideals, and personality.

The Makuta have access to forty-two different abilities in addition to their natural Shadow powers. Several of the powers are related to Elements, but do not grant the Makuta full control over it. Kraata and their subsequent Rahkshi can have access to only one of these powers:

Spinax attacking while under Teridax's control

Kraata and Makuta possess an additional ability not limited to any particular breed of Kraata:

Rahkshi possess one ability Kraata and Makuta do not specifically have:

Shadow Leeches, mutated Kraata, possessed one special ability which regular Kraata do not have before their extinction:

When three Rahkshi combine to form a Kaita, the resulting Kaita will have all the powers of the three constituent Rahkshi as well as another power.

While Makuta possess all of the powers of the Kraata they can create, they also have more advanced powers, including: 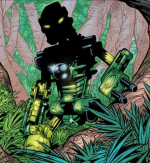 When the Bahrag created the Bohrok-Kal, they also created Krana-Kal, each with an upgraded version of their respective power:

Matoran each have within them a small amount of Elemental energy which manifests itself as an innate power:

As a result of experimentation by Spiriah, the Skakdi were granted various powers. Aside from elemental powers, each Skakdi is also gifted with vision-based abilities and an additional unique ability.

A number of Rahi have access to various abilities unique to the species.

Kanoka disks have many different powers, with each ability varying in strength in accordance to the Kanoka's power level. There are eight base powers and a variety more are achieved by mixing those eight. The Rahi Nui used to have access to all eight of these base powers. 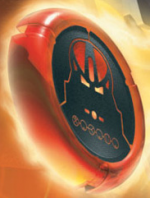 When Kanoka are combined and forged into Kanohi, new powers arise as a result of the process. Kanohi can also come into being by other means. The powers exist at various power levels, but generally have similar effects. Elemental Kanohi also exist, and grant the bearer access to certain aspects of an Elemental Power.

A Mask of Concealment being activated

Nuparu using a Mask of Flight

The Kanohi Nuva grant enhanced abilities compared to their normal Kanohi counterparts, and their abilities can be shared amongst those around the user.

A Pakari Nuva in use

Several other beings have unique powers not found anywhere else: