"Po-Wahi is... well, there's not much to it, really, mostly sand... lots of sand. But there are canyons, which are real pretty to look at, if the sun or the Rahi don't get you first... and the Path of Prophecies, which the ancient carvers made."
— A Po-Matoran Trader, Mata Nui Online Game

Po-Wahi was the region of Stone on the island of Mata Nui.

Envious of the Great Spirit's fame, Makuta Teridax planted a Virus in Mata Nui, causing him to slip into unconsciousness and crash into Aqua Magna. This unleashed massive damage throughout his body—the Matoran Universe. The disaster also caused a malfunction in his camouflage system, which created an island and thus the various Wahi over his face.

Before the Great Rescue, the Toa Metru journeyed to the island of Mata Nui in order to find a safe dwelling for the Matoran who at the time were in a comma. Onewa explored and named the area of Po-Wahi and found the eventual spot of Po-Koro. After the Toa Metru completed their mission, the saved Po-Matoran and Onewa, now a Turaga, built their village and inhabited it. Po-Wahi would be subjected to various strikes by Teridax and his Infected Rahi during the Dark Time and the Great War. Onewa was captured by Rahi, until Takua freed him, as well as collecting Vuata Maca Crystals and a Toa Stone.

After Takua collected the six Toa Stones and sent out an energy signal that beckoned the malfunctioning Toa Canisters toward Mata Nui, Toa Mata Pohatu arrived on the beach of Leva Bay and made his way into Po-Koro.

Later, Takua traveled to the Po-Wahi Quarry, following a lead to uncover the cause of the Po-Koro Epidemic. The Matoran found a hidden underground chamber filled with Infected Comets, which were guarded by a Nui-Jaga. Pohatu, who was also searching on the same lead, walked into the cavern and confronted the Rahi. However, the Nui-Jaga blinded Pohatu, who then asked Takua to be his "eyes", stating that he could use the balls to defeat the Rahi. After a while, the two were able to destroy the pillars holding the structure up, collapsing the the ceiling onto the Nui-Jaga. After his sight had returned and he had thanked Takua, Pohatu used his Kanohi Kakama to rush to Po-Koro and relay the news, resulting in the Infected Kolhii Balls being dumped into the sea.

Gali, in search of her Kanohi Miru, climbed a crumbling mountain in Po-Wahi. As the rocks gave way beneath her, she reached out for the Kanohi and activated it, thus floating to safety. However, she landed right into a group of Rahi, who had trapped her. Tahu arrived in time to save Gali, but not before she was knocked unconscious by a Tarakava and encountered a vision of the Toa Kaita Akamai and Wairuha.

After the Toa Mata began to search for the Kanohi together, the six journeyed to the shoreline of Po-Wahi in search of Tahu's Miru. Since Kopaka, Onua and Gali only possessed the Kaukau at the time, they dived under the water. Fighting against a Tarakava and discovering the effects of removing its Infected Kanohi, they acquired the mask and left.

Later, Lewa would gain Pohatu’s Kaukau in a rock face, by levitating over a trench that contained a Nui-Jaga. The plan was thought as foolish by Kopaka and dangerous by Pohatu who were travelling with him.

Being awoken prematurely by Teridax after his defeat by the Toa Mata, the Bohrok swarms spread rapidly through out Po-Wahi and suffered greatly from the destructive power of the creatures. With multiple strikes coming from swarms of Tahnok who continually used their heat power to melt stone, Pohatu, and later journeying with him Gali, defended Po-Wahi and Po-Koro against the Bohrok for a large duration of the invasion even to the point of Po-Koro's desertion. One occasion Gali, Pohatu, Onua, and Kopaka together created a trap for the swarms. After springing it, which flooded the Tahnok with water, Gali swam in and collected several Krana before they managed to escape. Pohatu and Gali would also later encounter more swarms in Po-Wahi.

Po-Wahi in Quest for the Masks

Later, once the Bohrok-Kal were released, the elementally weakened Toa Nuva tracked them to the edge of Po-Wahi, where they confronted the Bohrok and were defeated. In another attempt to stop the creatures, Tahu gathered the Tahnok swarms to fight against Nuhvok-Kal who defeated them simply by using his control over Gravity.

During the search for the seventh Toa, Tahu, Lewa and Gali fought against Panrahk, Lerahk and Guurahk in the Po-Wahi region. While they fought well, the Toa couldn’t work together, which caused them to be subdued by an avalanche created by the Rahkshi. Tahu saved his teammates however with his Mask of Shielding.

Kopaka would later wait for his brothers at their meeting place when all six Rahkshi arrived. Though he defeated two of the six Rahkshi, Kopaka began to weaken when Vorahk drained his energy. He was saved however by the appearance of Tahu, Lewa and Gali who had escaped from the crushing boulders in an earlier battle. Driving the Rahkshi off, the four Toa discovered a fleeing Pohatu, Onua and Whenua who had just escaped a cove of Kraata. Tahu and Kopaka then sealed the cave off.

The Bohrok's queens, the Bahrag, were later released by the Toa Nuva and proceeded to level Po-Wahi. After the reawakening of Mata Nui, Po-Wahi, along with the rest of the island, was completely destroyed.

The northernmost and second largest region of Mata Nui by area, Po-Wahi was a large, rocky expanse. To the east, it consisted mainly of the Motara Desert and the island's northern headland; to the west, mostly canyons and rocks along the Onu-Wahi border. Leva Bay was situated along its coastline, with paths leading to Onu-Wahi, Po-Koro and the Quarry leading from it.

Po-Wahi, along with the other Wahi, was cleared by the Bohrok swarms and later completely obliterated by the Great Spirit Mata Nui's reawakening.

The Motara Desert and coastline

Po-Kini was the temple of Stone.

The Po-Matoran were the primary Matoran who resided in Po-Koro, the village of Stone. The Po-Matoran are famous for their exceptional Kolhii skills. 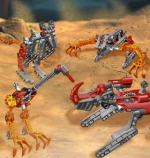 The area was inhabited by different species of Rahi accustomed to the area.