"You're my friends, and this is my home. If those things are not worth fighting and dying for, what is?"
— Piruk to Garan, Island of Doom

Piruk is a nervous Le-Matoran who acted as a spy for the Voya Nui Resistance Team.

Long ago, Piruk was sent to the realm of Karzahni along with hundreds of other Matoran, in order to be repaired due to some problem with his ability to work well. As he had grown weaker as a result of a poor repair job, Piruk had Shredder Claws attached to his hands to compensate. After that, Karzahni sent him to the Southern Continent, but during the Great Cataclysm, he was sent hurtling to the surface on the chunk of land that would become Voya Nui.

Piruk spent a thousand years with the other Matoran of Voya Nui fighting for every day of survival before he found Zaktan's canister washed up on the beach. The Piraka did nothing to help the Matoran's poor nerves with his cold voice and strange, shifting body, and Piruk ran away, telling the Piraka he would get someone to help. As the Piraka took over the island, Piruk was then assigned with Balta to oversee teams digging out reservoirs to collect lava from Mount Valmai. After all but six of the Matoran had been enslaved, the newly formed Voya Nui Resistance Team - consisting of Piruk, Balta, Velika, Dalu, Garan and Kazi - decided to send Piruk into the Piraka Stronghold, where he witnessed Zaktan in conversation with the contents of the Antidermis vat and then Zaktan attacking Avak, who had disturbed him. Piruk returned to the group's hideout with this information. The Resistance Team then stole a Zamor Sphere from Vezok. While the group was hiding waiting for Balta to return with the Zamor, they noticed the flashes of Ice and Fire which would soon be revealed as the Toa Nuva fighting the Piraka. The Resistance team, without Balta, then did battle with the Toa Nuva, whom they did not trust, until Balta arrived and stopped the fighting, explaining that the Toa Nuva were not more Piraka. The Toa and Matoran then joined forces and headed for the Piraka Stronghold. Outside Tahu tried to burn the lock on the back door, when Piruk saw Reidak coming. The others hid while Lewa taunted Reidak until he accidentally punched the door down. Reidak ran inside and the group followed. Using their abilities the group reclaimed the Toa's Kanohi Nuva and Tools. They then burst into the virus chamber where the Brutaka and five Piraka were. Brutaka then brought down all twelve heroes in a single attack, strengthened by the power of the Antidermis.

Piruk was interrogated with the others in the Chamber of Truth. They managed to escape and met up with the new Toa Inika. Together, they split up and headed in three teams to cure the infected Matoran of the Antidermis virus, using Zamor Spheres filled with Energized Protodermis. Piruk went with Dalu, Jaller, and Hahli. They successfully cured several Matoran and Piruk led them to safety. When the Piraka and Brutaka attacked again, this time the Voya Nui Resistance Team separated and began to search for the Toa Nuva. The Matoran found the Toa Nuva in a prison under the stronghold and freed them.

Piruk and the other Matoran were later taken to the Nui Caves by Axonn for safety as the island of Voya Nui was submerged and returned to the Southern Continent, as a result of the Toa Mahri destroying the the Cord connecting Voya Nui to Mahri Nui.

After the death of Makuta Teridax and the debilitation of the Great Spirit Robot, Piruk and the rest of the denizens of the Matoran Universe immigrated to Spherus Magna.[2] 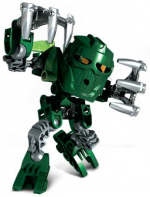 Piruk is stealthy and quick. The Voya Nui Resistance Team often made use of these traits when the Piraka invaded and employed him as a spy. He can be rather cowardly at times, and has a bad habit of sharpening his Shredder Claws when nervous. Despite this, he is loyal to his friends and is more capable than he gives himself credit for.

Piruk is also known to own a pet Desert Burnak, which was taken by him to the Nui Caves in order to survive the island's return to the Southern Continent.

Piruk carries a pair of Shredder Claws that can rip through almost anything, including solid metal. The claws are attached to his hands, thus he cannot remove them.

Piruk was released in early 2006 as one of the six small sets, consisting of twenty-five pieces. He could be combined with the Balta and Velika sets to make a Lava Hawk.