The Pahrak Va were created by the Great Beings to assist the Pahrak in clearing Mata Nui, returning it to its original status as a barren wasteland. Upon creation, the Va were placed in hibernation along with the other Bohrok, waiting for the time to be awakened and perform their duty.

After Makuta Teridax was defeated by the Toa Mata, he unleashed the swarms prematurely in order to buy himself time to recover from the Toa Mata's attack. The Pahrak Va awoke, and began aiding the Pahrak in their efforts to level the island, providing replacement Krana to Pahrak that had lost them to the Toa.

The Pahrak Va helped in many different missions on the island, and, eventually, converged with several Pahrak on Ga-Koro. While Takua and Jaller talked to Turaga Nokama about the defense of the village, the Pahrak began invading the village. Soon, the Po-Matoran arrived at Ga-Koro in boats, to escape the Bohrok in their own village.

Hahli, Macku and Kotu prevented the Bohrok from entering by dismantling the causeway to the village. The Bohrok attempted to sabotage this effort by destroying the village gate which sent rocks at the fleeing Matoran. Macku was nearly hit by one but was saved by the Po-Matoran Hewkii with a Fishing Staff. The reflected rock broke the path and denied the Bohrok access to the village.

While many of the Matoran talked at night, the Pahrak destroyed the Kaukau carving on Naho Falls. As the rubble fell, a rock bridge formed, connecting the shore to Ga-Koro. In Boxors, several Onu-Matoran began fighting the Pahrak. The Pahrak, seeing a way for victory, overturned the lily pads on which they stood. As the Boxors began to sink, Macku and Kotu dove down, rescuing their pilots. Unable to proceed to the village, the Pahrak stayed outside the limits, and the Matoran experienced a few moments of relative peace. However, some Pahrak Va arrived on the scene, and supplied the Pahrak with Krana Vu, which allowed them to fly over to where the villagers stood. Just in time, however, a blinding glow grew around the Ga-Suva. Gali's Kanohi disappeared, and her Nuva Symbol materialized above the Suva, signaling the defeat of the Bohrok Queens.

The Toa Nuva later returned to the Matoran's homeland of Metru Nui, and as told by the process of awakening Mata Nui found in the Great Temple, they released the Bohrok Swarms once more. As the Pahrak Va helped clear the island, they came upon their only threat, Kardas. After sustaining heavy losses, the Bohrok succeeded in subduing the creature. After cleansing the island, the Swarms returned to slumber once more, awaiting for the next time they would be needed.

Pahrak Va were strong and usually slow, but they could move quite fast if they have a reason to. They often performed scouting missions and kept communications up between the Pahrak swarms. However, their general lack of speed meant they were captured the most often by the Matoran during the Bohrok Invasion.

Pahrak Va carried stone hammers for both defense and offense. They also commonly carried Pahrak Krana so that they could replace the Krana that Pahrak had lost. 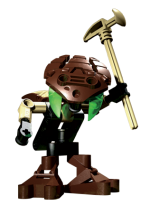 Pahrak Va as a set

8553 Pahrak Va appeared as a set in the spring of 2002 along with the other five Bohrok Va. It contained twenty-seven pieces. The set included a random shape of tan Krana, the dormant Krana of Pahrak. By pressing down its left arm, the Krana in its back holder can be flung forward.