Orkahm was Matau's chief rival in Metru Nui. During the Toa Metru's quest for the Great Disks, Matau searched for Orkahm to learn the location of the Le-Metru Great Disk. After searching through Orkahm's journal, he found that Orkahm had traveled to Moto-Hub Sector Three, which had long been known for the sheer number of chute malfunctions that took place there. The Le-Matoran was threatened into going there in return for the life of his Ussal, Pewku. Matau tracked Orkahm there, where he found him snared in a tangle of transport cables by Nidhiki and Krekka. Matau untangled him and they barely escaped the Morbuzakh vines that attacked them. He informed Toa Matau as to the location of the Le-Metru Disk (inside a Force Sphere), and joined him, Toa Nokama, and Vhisola while they searched for their disks.

When the Toa Metru entered the Great Furnace, he merged with the five other Great Disk Matoran (Ahkmou, Ehrye, Vhisola, Nuhrii and Tehutti), and formed a Matoran Nui which helped the Toa to penetrate the inner chamber of the Morbuzakh. He later separated from the other Matoran, going his own way. He was later forced into a Matoran Sphere along with the rest of Metru Nui's population, but was saved by the Toa Metru. During his time in the pod he was physically weakened and his memories erased. He was awakened by the Toa Metru along with the others (the Toa turned into Turaga in the process) on the island of Mata Nui.

After arriving on Mata Nui, Orkahm assisted in the construction of Le-Koro, following Matau's instruction and using melted-down pieces from Airships in which the Toa arrived on Mata Nui with the Matoran. Orkahm lived in Le-Koro for a thousand years, facing the darkness of Teridax who menaced the island, and his infected Rahi. On Mata Nui, Orkahm's name was changed to Orkan under unknown circumstances, though it has since been changed back. He was also a member of the Gukko Force.

During an attack on Le-Koro, Orkahm, the other members of the Gukko Force, and Tamaru were the only ones to keep from being captured by the Nui-Rama swarms. Later during a second attack, he along with the other members saddled up and rode into battle. Matau, and the other Le-Matoran were eventually freed with the help of Onua.

After Metru Nui was rediscovered, Orkahm and the other Matoran constructed Boats to return there and currently live there once more. When Toa Mahri Jaller returned to Metru Nui, he also returned to Orkahm ownership of Pewku, his former Ussal.

Where Matau was bold and reckless, Orkahm was responsible and careful. He was an Ussal rider like Matau once was, but tended to possess more control. He was also slow and meticulous and known for having little imagination. Orkahm's favorite Ussal was Pewku. 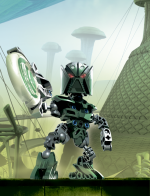 Orkahm was released in early 2004 as one of the six small sets and came packaged with a Kanoka disk and silver Disk Launcher. The set consisted of 27 pieces including these two and his mask, featuring a blend of plastics in silver and his primary color (dark green) like those of all Matoran of Metru Nui sets. He could also be combined with Ahkmou and Nuhrii to create the Kinloka combiner.