"A little invention of the Nynrah crafters of Xia. One shot and I control every mechanical part of your body."
— Bitil to Toa Nuva Onua, Swamp of Secrets

The normal model of the Nynrah Ghost Blaster allows the wielder to mentally take control of any mechanical object that he/she fires at, though the effect is temporary and fades over time. Even the mechanical components of biomechanical beings could be controlled in this fashion.

The blasters carried by the Mistika Makuta were destroyed during the Energy Storms. 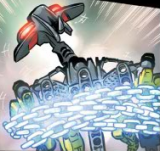 The Toa Nuva Mistika team's projectile weapons, given to them by Artakha, have taken the shape of Nynrah Ghost Blasters, though the effect they have is different from the Makuta's models. The Toa Nuva's blasters shoot energy that the Toa can then form into other types of energy with their minds. The weapons took this shape for specific use against the Makuta Mistika for the energy fired by this model includes Light energy.[Bios] Gali Nuva and Onua Nuva both have laser sights on their blasters. These models can also be used to channel Elemental Powers.[3]

The set function for the Nynrah Ghost Blaster

The Nynrah Ghost Blasters were produced in set form for the six Mistika canister sets of summer 2008. They are a six-piece construction consisting of a soft plastic button which acts as an air pump, the main section of the blaster, which has two axle holes (one to store an extra ammunition piece, another to hold onto the blaster), two axles which hold the pump onto the main section, and two ammunition pieces. The blaster fires either of the two ammunition pieces by using air pressure. The three Makuta Mistika sets carry Nynrah Ghost Blasters with a red button and lime green ammunition, while the three Toa Nuva Mistika sets and the Trinuma combiner wield blasters with a dark silver button and ammunition.