"Oh my — nasty things. One of them is hard enough to deal with — anger a swarm and you will have a very short day."
— Rahaga Kualus, Rahi Beasts 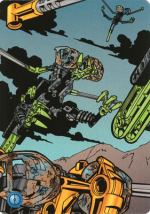 The Nui-Rama species was created by the Makuta using Viruses and Liquid Protodermis to be one of the Rahi to inhabit the Matoran Universe.[2]

On Metru Nui, the Nui-Rama became one of the earliest recorded Rahi menaces, with Vahki spending centuries trying to remove them from their nests in Le-Metru. This Rahi's main source of food was Liquid Protodermis. Nui-Rama avoided consuming Protodermis from the Silver Sea due to other water-dwelling creatures; this was the reason their main source of Protodermis became Chutes. Matoran believed that Nui-Rama are attracted to Liquid Protodermis due to its impurity. The Nui-Rama used their stinger to pierce the magnetic field of the chutes and suck in the Protodermis. Sometimes, if a Nui-Rama was to return to the same feeding spot often enough, it would cause the structure to collapse.[3] One such Chute collapse was responsible for the death of the Ko-Matoran seer Ihu.[4][5] At one point, a population of Nui-Rama found their way into the region underneath Ta-Metru, driving out the local Stone Rats. The rodents escaped to the district above, and brought chaos and danger for weeks before the wasps were driven out.[6]

Sometime during the Toa-Dark Hunter War, trained Nui-Rama were used to take messages to the Shadowed One.[7]

After the events of the Great Cataclysm, many of the insects migrated to the island of Mata Nui, where they fed on plant sap and other natural fluids. These Nui-Rama were soon placed under Makuta Teridax's control through the use of Infected Kanohi.[5] Toa Mata Kopaka encountered one of these creatures soon after his arrival on Mata Nui. Nuju explained about the creature, along with Kopaka's duty to awaken the Great Spirit.[C1] Pohatu and Onua encountered a pair of Nui-Rama.[8] Lewa was ambushed by Nui-Rama after recovering a mask of his own; these Nui-Rama knocked him down to the waiting jaws of a Muaka and then flew off, though Lewa was later rescued by Onua.[C2] Later, during a meeting of the Toa Mata, Teridax had several Nui-Rama attack them along with other Rahi. These Nui-Rama threw Tahu high in the air and let him fall, though he was caught at the last moment by a nearby Onua. The Toa of Earth then used his Mask of Strength to dispatch the flying insects.[C3]

A green Nui-Rama in the Mata Nui Online Game

During Takua's wanderings of the island, he encountered a Nui-Rama, which captured the Onu-Matoran Taipu, whom Takua had just befriended. Takua ran all the way to Le-Koro, where the local military was gearing up for battle with Nui-Rama, who had kidnapped Turaga Matau, several Le-Matoran and Lewa. Takua joined with the Gukko Force and helped assault the Nui-Rama hive. Takua was kidnapped and taken to the hive, where he found Matau and Taipu, along with Lewa bearing an infected Kanohi. Takua and the others were rescued by Onua, who also saved Lewa and removed his infected mask. Lewa took control of a Nui-Kopen, and used it to escape with the others.[MNOG, Ch. 6]

While the Toa were underground, fighting through Teridax's defenses, the Makuta deployed a force of Rahi, including Nui-Rama, to attack Kini-Nui. The Rahi were repelled by various Matoran military, and eventually retreated when Teridax was defeated.[MNOG, Ch. 9] He abandoned his hold over them, and some Nui-Rama were eventually adopted as secondary mounts in the Gukko Force. The others were left to fly over Mata Nui, no longer a notable threat.[9]

When the Toa Nuva intentionally released the Bohrok, the Nui-Rama returned to Metru Nui with the other Rahi and the Matoran.[10]

After the Great Spirit Robot was critically damaged in the Battle of Bara Magna, the surviving Nui-Rama left the Matoran Universe and immigrated to Spherus Magna.[citation needed] 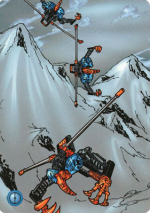 Nui-Rama could be found all over Mata Nui, predominately around Le-Wahi[5] and sometimes Ta-Wahi.[11] Nui-Rama spent most of their time in the air, flying around and catching prey. Makuta would often use his infected Nui-Rama as scouts, spending their time spying on the Toa Mata.[9] Like some other species of Rahi, Nui-Rama appear to come in several colors, such as orange and green. The Nui-Rama have large stingers for feeding, which they sometimes use to attack their prey,[3] in addition to the powerful claws they possess.[MNOG, Ch. 6] In battle, they use speed and stealth to their advantage.[1] The Nui-Rama's wings are strong enough to allow them to lift a Toa in the air. They are most aggressive when their nest is threatened, but they may be slowed down with intense cold.[3] Nui-Rama can even be tamed by Matoran and used as mounts.[9]

One predator of the Nui-Rama is the Ranama, which uses its long, sticky tongue to catch the Nui-Rama while remaining hidden under the surface of the lava rivers in which they dwell.[11]

There exists a breed of Rahi closely related to the Nui-Rama, which are capable of throwing their stingers from a distance. Krahka once imitated this Rahi.[13]

The orange Nui-Rama as a set

Two Nui-Rama models, one orange and one lime, were packaged together as 8537 Nui-Rama in 2001. Altogether the two Nui-Rama had 138 pieces. Pressing a button on either model's back caused it to flap its wings forward in a quick thrust, advertised as a means for the Nui-Rama to battle one another or a Toa Mata set. The two could be combined to make a Nui-Kopen model, the instructions for which were included in the instruction booklet of the orange Nui-Rama.