Navigation
BS01 Pages
donate
Wiki tools
In other languages
From BIONICLEsector01
Revision as of 05:24, 18 March 2018 by Intelligence4 (talk | contribs) (the venom isn't a power like the poison rakhshi, it's just something it's body does. would you consider a real life bee's stinger to be a power?)
(diff) ← Older revision | Latest revision (diff) | Newer revision → (diff)

Nui-Jaga are a species of scorpion-like Rahi. 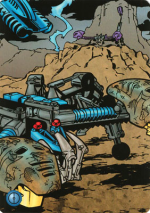 The Nui-Jaga species was created by the Makuta using Viruses and Liquid Protodermis to be one of the Rahi to inhabit the Matoran Universe.[citation needed]

Nui-Jaga were commonly found in the Po-Metru district of Metru Nui. Their stingers were very valuable, so hunters often went to hunt the Rahi, but they did not return.[1] After the Great Cataclysm, many Nui-Jaga migrated to the Po-Wahi region of the island of Mata Nui.[2]

During the Great War, many Nui-Jaga were corrupted by Makuta Teridax to harass the local Matoran.[2]

Lewa once encountered a Nui-Jaga while searching for Kanohi. The Rahi, under the control of Teridax, attempted to impede his progress, but was defeated by Lewa's Air powers.[C2] Gali also battled against a group of Nui-Jaga while she recovered a mask of her own and was rescued by Tahu. During a meeting of the Toa Mata, Teridax sent Nui-Jaga and other Rahi to attack the Toa, but these were defeated by Gali and her Water powers.[C3] Teridax also assigned a Nui-Jaga to guard Ahkmou's stash of Comet Kolhii Balls. This scorpion managed to temporarily blind Pohatu with its poison, but was eventually defeated when the Toa of Stone, with the help of Takua, collapsed the cave it was in.[MNOG, Ch. 4]

Onepu, Jaller, Macku, Kongu, Hewkii, and Matoro once encountered a Nui-Jaga while traveling to the Disk throwing tournament. They managed to trap the Rahi, and soon after merged into a Matoran Nui to dispatch the beast.[MDC1]

Later, when the Toa Mata were underground attempting to defeat Teridax, he sent swarms of Nui-Jaga to attack Kini-Nui with other Rahi under his control. These Rahi were fended off by the Chronicler's Company and several Matoran military groups. They eventually retreated when Teridax was defeated, and he abandoned his hold over them.[MNOG, Ch. 9]

The Nui-Jaga continued to roam over Mata Nui, no longer a large threat to the Matoran. When the Bohrok attempted to cleanse the island, the Rahi did their best to avoid them.[citation needed]

When the Toa Nuva intentionally released the Bohrok, the Nui-Jaga migrated back to Metru Nui.[citation needed]

After the Great Spirit Robot was critically damaged in the Battle of Bara Magna, the surviving Nui-Jaga left the Matoran Universe and immigrated to Spherus Magna.[citation needed]

The Nui-Jaga are very aggressive and hot-tempered, always ready to strike a stranger or even another Nui-Jaga.[1] They are able to use their stingers to fling venom that causes temporary blindness if it enters the eyes,[MNOG, Ch. 4] or to strike an opponent and inflict a more painful and sometimes fatal sting.[1] Nui-Jaga also have powerful claws that can shatter solid rock.[citation needed]

These Rahi hunt in packs and their preferred hunting method is to drive prey into a corner before striking. Once the target is surrounded, they communicate with each other before making their next move. Nui-Jaga cries have been compared to the sound of breaking glass.[1]

Their weakness is their lack of intelligence. Rahaga Norik advocated using a sheet of crystal to pacify one, by placing it down in front of the scorpion. It would mistake its reflection for another Nui-Jaga and try to sting it, possibly burying its stinger in the ground and allowing one to escape or handle more easily.[1] 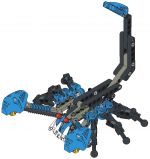 A blue Nui-Jaga as a set

Two Nui-Jaga (one blue, one purple) were released as a single, large boxed set, 8548 Nui-Jaga in 2001. All together, the two Nui-Jaga had 214 pieces. The underside of the head acted as a trigger, which one could pull while holding a handle towards the model's rear to make the model attack with its tail. This was advertised as a means for the Nui-Jaga to attack one another or a Toa Mata set. The two Nui-Jaga could be combined to make the Kahu model, the instructions for which were included in the instruction booklet of the purple Nui-Jaga.

A purple Nui-Jaga in the Mata Nui Online Game