"I admit it, I've always been jealous of your skill as a mask-maker. I thought that if I turned that special Kanoka disk into a mask, it would outshine anything you had ever done."
— Nuhrii to Toa Vakama, Vakama's Toa Metru Mini Promo CD

Nuhrii is a Ta-Matoran native to Metru Nui and one of the six Matoran who knew the location of a Great Disk.

However, the site was one of the first sites to be attacked by the Morbuzakh, and the region was mostly abandoned. Nuhrii was then trapped under a pile of rubble, and was rescued by Vakama, who had gone in search of him. They were then attacked by a Morbuzakh vine, which grabbed Vakama. Using an enlarging Kanoka Disk, Nuhrii enlarged the vine, and Vakama was able to slip through. The Toa and Matoran quickly departed to the Great Temple. There, with the other Matoran, the Toa Metru discussed everything and deduced that Ahkmou was the one had betrayed the other Matoran and set them up to be trapped, based on evidence found all over the island. Onewa wanted to teach him a lesson, but Vakama held him back.[3]

The Toa split into pairs, and Nuhrii led Vakama and Onewa to the Ta-Metru Disk and recovered it with Vakama. After this, Ahkmou showed the group the location of the Po-Metru Disk which Onewa retrieved. They then proceeded to the Great Temple, avoiding a Bordakh squad, and met with the other Toa. With the help of Ehrye, Vhisola, and Nuhrii, they determined that the Morbuzakh King Root would be in the Great Furnace. So they traveled to the Great Furnace, but were attacked by Morbuzakh vines before they could get in. Tehutti, having learned it in the Archives, showed the Matoran how to merge into a Matoran Nui. They kept the Morbuzakh at bay while the Toa Metru went in, but returned to their original forms eventually. All of the Matoran were exhilarated, and thought it was a great experience, but Ahkmou backed away and fled into the shadows.[4]

Soon afterwards, Nuhrii was captured by the Vahki and forced into a Matoran Sphere, under the command of Makuta Teridax, disguised as Turaga Dume. During his time in the pod he was physically weakened and his memories erased. He was awoken by the Toa Metru, along with the others, on the island of Mata Nui.[5]

Nuhrii helped in the construction of Ta-Koro under Turaga Vakama's supervision, using pieces from the Airships utilized by the Toa in the Great Rescue.[6]

Nuhrii lived in Ta-Koro for a thousand years, facing the darkness of Teridax, who menaced the island with his infected Rahi, as a member of the Ta-Koro Guard.[7][1] On Mata Nui, he was given a black Kanohi Kaukau.[7] During the Rebuilding, Nuhrii was rebuilt into a stronger form.[8] He was later evacuated from Ta-Koro with the other Matoran during the Rahkshi attack.[9]

Following the death of Teridax as a consequence of severe damage sustained by the Great Spirit Robot, Nuhrii left the city of Metru Nui with the other surviving inhabitants, to begin afresh on Spherus Magna.[11][12]

The mentor of Vakama, Nuhrii was jealous of his former student because he made finer masks than him. His jealousy grew into anger when Vakama was asked personally by Turaga Dume to assist in the making of a Mask of Time. Determined to find fame, he was easily tricked by Ahkmou and sought to find the Ta-Metru Great Disk to forge it into the ultimate Mask of Power.[3]

Like all Ta-Matoran, Nuhrii possessed a naturally enhanced resistance to heat.

Nuhrii wore a powerless Noble Kanohi Ruru, but it was damaged on Mata Nui, so he took to wearing a powerless Great Kanohi Kaukau.[7]

Nuhrii most often carried a level three poison removal Kanoka with a code of 143 due to the number of poisonous reptiles in Ta-Metru.[citation needed] 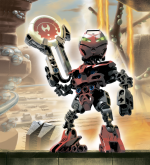 8607 Nuhrii was released in early 2004 as one of the six small sets. The set contains a Kanoka disk and silver Disk Launcher among its twenty-seven pieces. Nuhrii could also be combined with 8610 Ahkmou and 8611 Orkahm to create the Kinloka combiner. His mask features a blend of his primary color (dark red) and silver, like his fellow Matoran of Metru Nui