"You are a monster, Nidhiki. Matoran seeing you would run screaming. You will never be cheered, never be admired, never be hailed as a savior by the crowds. What are you now? A Toa of Nightmares? A hero, Nidhiki, or a horror? No, I think you will find your place is now, and forevermore, with the Dark Hunters. For who else would have you?"
— The Shadowed One, Birth of a Dark Hunter

Nidhiki was a Le-Matoran native to the Tren Krom Peninsula[3] and later became the Toa Mangai of Air. He defected to the Dark Hunters during the Toa-Dark Hunter War and was mutated into a large insectoid being. He was later killed when he was absorbed into Makuta Teridax's essence.

As a Matoran, Nidhiki lived on the Tren Krom Peninsula.[4][3]

After becoming a Toa, Nidhiki was forced to learn to attack from the shadows due to the inhospitable nature of the Tren Krom Peninsula in order to maximize his survival chances.[4]

Around 3,500 years ago, while most of their teammates were out on missions, Nidhiki helped Lhikan investigate the mysterious attacks on the Matoran of Metru Nui. Their teammate Tuyet told them that the Dark Hunters believed she possessed the Nui Stone, and were responsible for the deaths of the Matoran as a threat to her. Nidhiki fought and defeated Devastator and later helped Lhikan to work out that Tuyet was actually the cause of the deaths, joining Lhikan in confronting her. After her defeat, Nidhiki tried to obtain the Nui Stone for himself, but Lhikan intervened just in time to stop him from making the same mistake.[6]

War with the Dark Hunters

During the Toa-Dark Hunter War, Nidhiki was assigned to protect Turaga Dume, though he grew bored with guard duty and slipped out, joining Lhikan on his rounds. While searching Ga-Metru by himself, Nidhiki was confronted and cornered by the Dark Hunter Lariska, who proposed that Nidhiki betray the city in exchange for a leadership position in it. Tempted by dreams of conquest, Nidhiki agreed to lead the Toa into the ambush so the Hunters could win the war. Lhikan sent Nidhiki to meet some supply boats the next night, but Nidhiki left without hearing where, and instead met with Lariska and completed their agreement.

The next morning, Nidhiki told Lhikan and the other Toa that the Dark Hunter's base was hidden in the Canyon of Unending Whispers, and that every Toa was needed in order to end the war. Nidhiki led the Toa into the valley, where they were surrounded by Dark Hunters. However, Lhikan had discovered his betrayal, and prepared a counter-ambush with Toa reinforcements, which had arrived on the supply boats Nidhiki was supposed to have visited. With his betrayal revealed, Nidhiki was told to leave or face execution.[4]

The Shadowed One made Nidhiki a trainer, though Nidhiki believed himself to be above the position. He was responsible for preparing a team to capture the Makoki Stone from a heavily defended fortress. He got easily bored with training the team, and was especially annoyed with one trainee, Krekka. He later met with the Shadowed One, who decided to send him on a mission with a partner. Nidhiki was convinced that it would be Lariska; however, the Shadowed One instead paired him with Krekka. With Lariska acting as reconnaissance, their first mission was to steal three prototype launchers developed by the Nynrah Ghosts.[4][7][8] Lariska went ahead to distract the Toa there, while Nidhiki and Krekka retrieved the launchers. Nidhiki wanted to bring one to the Shadowed One and keep the other two for himself, offering one to Krekka as a bribe. Krekka threatened to turn him in, however, and Nidhiki was forced to give all three to the Shadowed One.

He soon met Roodaka, a Vortixx who wanted the training of a Dark Hunter, but did not want to join the organization. He offered to train her if she would help him escape the island and the organization. Roodaka agreed, then reported his treachery to the Shadowed One. In exchange for training, Roodaka used her Rhotuka power to mutate Nidhiki into a monstrous insectoid form. The beach where this occurred was later named Nidhiki Beach.[4]

Some time after being mutated, Nidhiki was hired with Krekka to guard the Kanohi Avohkii on Destral. When the mask was stolen by the Toa Hagah, four of the Hagah were later captured. Nidhiki was on his way to question them, but the Toa (now mutated into Rahaga by Roodaka) were freed by Norik and Iruini, who were then also mutated into Rahaga.[9] For their failure, the Brotherhood ordered their execution, but the Shadowed One refused to grant their request.[5]

Krekka and Nidhiki outside the Coliseum

Nidhiki eventually returned to Metru Nui, along with Krekka and Eliminator, to assist Makuta Teridax, who was impersonating Turaga Dume. Nidhiki and Krekka tracked Nidhiki's old teammate Lhikan as he retrieved Toa Stones to make a new team of Toa, ambushing him in the Great Temple, though the Toa of Fire managed to escape. The pair caught up with him after he delivered the Toa Stones to the destined Toa Metru, and attacked him in Vakama's forge. Nidhiki threatened to kill Vakama, holding him over the forge, giving Krekka the opening he needed to defeat Lhikan. Though Lhikan surrendered, Nidhiki dropped Vakama anyway, forcing Lhikan to sacrifice his own safety to save the Ta-Matoran. Nidhiki and Krekka captured the Toa, and took him to the Prison of the Dark Hunters.[10]

Nidhiki then convinced Ahkmou to undermine the Toa Metru and find the Great Disks so the Toa could not defeat the Morbuzakh, paying the Matoran for his services. Nidhiki provided Ahkmou with five notes that would lead the other five Matoran who knew the locations of the Great Disks into traps set by himself. While Vakama saved Nuhrii from Morbuzakh vines, Nidhiki sabotaged the vat controls. However, after three of these Matoran were rescued by the Toa Metru, Nidhiki became impatient, and intimidated Ahkmou by introducing him to Krekka.[11]

Nidhiki and Krekka being absorbed by Teridax

The duo later returned to the Coliseum and attempted to kidnap the Toa Metru, trapping three of them. The other three escaped in chutes, and the Dark Hunters tried to capture them by coercing Kongu to reverse the chute flow.[12] The Toa successfully evaded the Hunters, who soon caught up with them and battled the Toa onboard an Airship in Le-Metru. After Vakama teleported Krekka out of the ship, the Toa left Nidhiki, who decided to find Krekka rather than pursue them.[13]

Nidhiki and Krekka made another attempt to capture Nokama, Vakama, and Matau in Po-Metru, but were stopped by a stampede of Kikanalo. Afterwards, Matau used his Mahiki to fool the pair into following and attacking each other in the Canyon of Unending Whispers.

Later, the two assaulted the Toa Metru's Vahki Transport, but Onewa used his Mask of Mind Control to make Krekka attack Nidhiki. The pair fell off the transport and Nidhiki was caught by Teridax's Shadow Hand, together with Krekka and Nivawk. Teridax absorbed their essences, killing them, in order to fuel his own transformation.[10] As a result of perishing in this fashion, Nidhiki could not be revived in a new body aboard the Red Star.[14]

Nidhiki chose to betray Lhikan and join Tuyet, and the two killed the Toa of Fire. After that, they organized the other Toa into a corrupt army, with only the Brotherhood of Makuta and Dark Hunters to fight for freedom.[15] Later, Nidhiki led a team sent by Tuyet to kill the Nynrah Ghosts. He succeeded in wiping out all of them.[16]

Nidhiki in his flight mode

Nidhiki in Legends of Metru Nui

Nidhiki was always ready to get into action, and had to be reprimanded by Lhikan for letting himself pursue enemies instead of guarding Dume. He enjoyed taking risks, such as going through Dark Hunter territory without his Kanohi Volitak activated. Despite this, he tended to take a pragmatic approach to fighting, and was willing to attack enemies by surprise. He was also skilled in thievery. Nidhiki had a revulsion for insectoid Rahi, rendering his transformation into one an even more traumatic event. He lacked the loyalty necessary for him to be part of teams. After he defected to the Dark Hunters, he tried to leave them only a few months later.[4]

As a Toa, Nidhiki had control over the Element of Air. After his transformation into his mutated Dark Hunter form, he gained the ability to launch Kanoka from his mandibles, although he lost his elemental and mask powers. He could fold in his legs and fly, and shoot force bolts. During the transformation, his hands were replaced with large claws.

As a Toa, Nidhiki wore emerald green armor[4][17] and carried an Air Scythe, which allowed him to focus his Air powers. He also wore a green[18] Volitak, which allowed him to move almost unseen and completely unheard. His Kanohi Volitak was fused to his face when he was mutated, and he lost access to its powers.

Nidhiki as a set 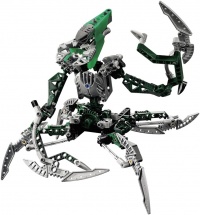 8622 Nidhiki was released in 2004. He contained 170 pieces including an Onu-Metru Kanoka disk. His head, identical in construction to that of a Vahki, could fire Kanoka disks from its mandibles, and each of his claws could snap open or shut using a switch near each elbow. His legs could fold up against his body and his body could fold back, rendering his shape thinner and flatter. This symbolized his ability to fold up for flight. Nidhiki's parts could be combined with those of 8621 Turaga Dume & Nivawk to construct a Lohrak using instructions included in a 2004 LEGO Magazine. Nidhiki could also be combined with 8623 Krekka and Turaga Dume & Nivawk to create the form of Teridax known as "Ultimate Dume", whose instructions could be found in each component's instruction booklet. Nidhiki's parts and instructions were also included in the 2004 special edition set, the 10202 Ultimate Dume, exclusive to Toys "R" Us.

Originally, there was going to be a Toa Nidhiki set, but the design instead became 8762 Toa Iruini.[19]

"You are so trusting, so convinced of the purity of Toa. I don’t think Nidhiki even trusts himself. Better keep an eye on him, Lhikan, he’ll come to no good."
— Tuyet, The Many Deaths of Toa Tuyet

"You take all the fun out of constant violence, Lhikan."
— Nidhiki to Lhikan, Birth of a Dark Hunter

"A friendly place we have here. Heavily defended, home to several hundred killers, and unfailingly lethal to trespassers, but friendly."
— Nidhiki, Birth of a Dark Hunter

"This time, your farewell will be forever, brother."
"You lost the right to call me brother long ago!"
— Nidhiki and Lhikan, Legends of Metru Nui

"I see you have spirit, little Toa. I hate spirit."
— Nidhiki to the Toa Metru, Struggle in the Sky

"You think you can save Metru Nui, little flame? You are just a Matoran with delusions of adequacy."
— Nidhiki to Vakama in a vision, Dreams of Darkness