This article is about the Skakdi warlord. You may be looking for the robotic defense devices.

"So. You did learn something from your enemies, Toa. Maybe we won in the end, then - we made you like us."
— Nektann to Toa Mata Tahu, Journey's End 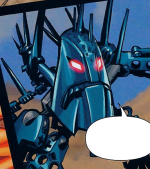 Nektann, along with all other Skakdi, existed peacefully with other species until the arrival of Makuta Spiriah. As a result of the Makuta's experiments to give them powers, Nektann was granted elemental control of Water, a vision power, and an individual ability. Corrupted by their newfound powers, the Skakdi became a violent, destructive race.[1] At some point in time, Nektann was elected leader of a Skakdi tribe. He situated his camp near the coastline of Zakaz.[DW, Ch. 2]

Sometime in the past, Nektann ordered a shipment of automated weapons from Xia. These weapons were named after Nektann as he was the first Skakdi to use them.[OGDi: 3 August 2008, 2:10 AM]

Axonn and Brutaka arrived on Zakaz during the Order of Mata Nui's war against the Brotherhood, in an attempt to form a pact with Nektann and an alliance with the Skakdi. They started by 'knocking on the door', but many Skakdi attacked the two Order members, cornering them on the beach. After defeating most of the army, the duo gave themselves up.[DW, Ch. 2] Axonn then insisted they be taken to Nektann himself, and the pair found him sitting on a throne of fused weapons taken from fallen enemies. Axonn tricked Nektann into believing that they had spoken to the other Skakdi warlords and they had agreed to fight against the Brotherhood of Makuta to become rich. Nektann then agreed to ally himself with them to fight the Brotherhood.[DW, Ch. 3]

Nektann amassed his army, and followed the pair to one of the Southern Islands, where they discovered large contingents of Rahkshi. While Axonn and Brutaka busied themselves searching for a mysterious location on the island, Nektann and the other warlords led their forces into battle with the Rahkshi. Though the Rahkshi retaliated fiercely and managed to cut down a number of the opposing forces, the Skakdi eventually mustered up enough rage to fight back, and smashed through the Rahkshi's ranks.[DW, Ch. 4]

Nektann fighting against the Toa Mahri

Teridax eventually claimed dominance over the entire Matoran Universe, despite the efforts of the Order and others to stop him. Nektann, realizing that it would be futile to fight him, instead allied with the Makuta.[2]

Nektann was later assigned by Teridax to lead a strike force of Rahkshi to Metru Nui in order to suppress the rebellion, although they were met with resistance from the Toa Mahri.[MNS, Ch. 12][OGDi: Feb 12 2010, 11:08 AM]

Nektann was given the order by Teridax to move his Skakdi south to the Southern Islands. Despite his doubts, he fell in line with the Rahkshi to go to the islands.[2]

They traveled to the southern edge of the Matoran Universe, where Nektann released his army onto the surface of Bara Magna to fight against Mata Nui and the Glatorian. During his skirmishes, in which he killed numerous combatants, Nektann came across the shield piece Golden Armor in the sand and claimed it as his own.[3] 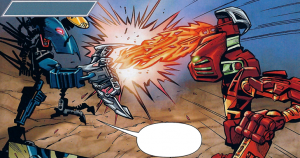 Nektann was then confronted by Toa Tahu, who was seeking the piece. During their fight, Nektann taunted the Toa of Fire, challenging him to use only his physical strength in an attempt to get him to fight hand to hand. Tahu refused to be baited by the Skakdi and threatened to use his full power. Amused, Nektann claimed a victory, telling Tahu that he had become like his kind. An angered Tahu attacked Nektann, who then grabbed the Toa by the throat. However, Tahu used his Fire power to melt Nektann’s armor, and dispatched the Skakdi with a blow, knocking him unconscious.[4]

After the Battle of Bara Magna, Nektann was imprisoned.[5]

In this alternate universe, Nektann and other Skakdi survived the end of the Matoran Universe after Mata Nui's death. After their migration to the island of Mata Nui, Nektann was chosen to be a member of Turaga Takanuva's ruling council.[TK]

Nektann respects power, hence his alliance with Teridax after the Makuta took over the universe.[OGDi: Nov 9 2009, 12:10 PM] He has great experience in the area of war and lacks expertise in other fields, but this did not keep him from pondering the importance of Zakaz and the Skakdi in the Matoran Universe's function.[2]

7137 Piraka was included in the BIONICLE Stars line of 2010. The line was meant as a commemorative series and this set was meant to represent the Piraka line from 2006. Because the set did not resemble any one Piraka set in particular, the decision was made to assign it to another character. Greg Farshtey and the story team decided on Nektann.[citation needed] The set consists of 15 pieces, including the Golden Armor piece included in the set. Nektann could be combined with the five other Stars to form Gaardus; the instructions for the set were released on BIONICLE.com.

"It was still shocking to realize that Zakaz and everything around it was not part of a world, but just the insides of a great robot. Nektann knew about being a warlord, but he was not an engineer and did not comprehend how large machines worked. Wouldn't each part of a machine have to play a role? And if so, what was the role of the Skakdi?"
— Nektann's thoughts, Journey's End